WASHINGTON, D.C. -- Gallup partners with Purdue University to conduct an ongoing nationally representative study of college graduates with Internet access called the Gallup-Purdue Index. The Gallup-Purdue Index evaluates the long-term success of graduates in their pursuit of great jobs and great lives through Gallup's employee engagement metrics and the Gallup-Healthways Well-Being Index, respectively.

The Gallup-Purdue Index 2015 Report explored the relationship between student debt, experience and perceptions of college worth. The report examined questions such as:

Student Loan Debt: Major Barrier to Entrepreneurship. Among students who graduated between 2006 and 2015, 63% left college with some amount of student loan debt. Of those, 19% say they have delayed starting a business because of their loan debt. This percentage rises to 25% for graduates who left school with more than $25,000 in student loan debt. These data provide new motivation to do everything possible to make college more affordable.

Returning Vets Don't Feel Their College Understood Their Needs. Thirty percent of all military service members and veterans strongly agree that their college or university understood the unique needs of military service members and veterans. This percentage increases to 40% among those who served while attending college and decreases to 25% among those who served before enrolling in their undergraduate program.

Support and Experiential Opportunities Linked to Feeling Prepared for Life After College. Just 3% of all college graduates strongly agree that they had all six key experiences -- "Big Six" -- that strongly relate to whether they felt their colleges prepared them well for life and that might have bettered their chances of receiving their degrees on time. These experiences include having professors who made them excited about learning and cared about them as people; having a mentor who encouraged them to pursue their goals and dreams; working on a long-term project; taking part in an internship or job during which they applied what they were learning in the classroom; and being extremely active in extracurricular activities and organizations in college. 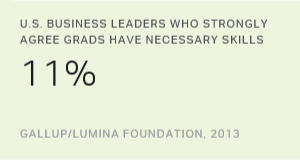 New study shows a worrisome relationship between student loan debt and the likelihood of graduates starting their own businesses.