More than eight in 10 of the nation's chief K-12 education leaders say that student engagement with classwork, their hope for the future and the percentage of them who graduate from high school are "very important" measures of a public school's effectiveness.

These results are based on Gallup's Nov. 5-23, 2015, survey of more than 1,200 K-12 public school district superintendents and represent the views of superintendents nationwide. Gallup conducts this survey to understand superintendents' perceptions and opinions on the main issues facing U.S. schools.

Superintendents are less likely to highly prioritize the paths students take after high school as a measure of a school's effectiveness. About half as many superintendents say the percentage of students who go to technical or trade school (43%) or who go to college or community college (42%) are very important measures of school effectiveness. They are even less likely to say it is very important to measure the percentage of students who get jobs immediately after high school graduation.

Findings from the 47th Annual Gallup/PDK Poll of the Public's Attitudes Toward the Public Schools show that the U.S. public agrees with school leaders. In this nationally representative sample of U.S. adults, nearly eight in 10 say engagement (78%) and hope (77%) are very important measures of school effectiveness, and a majority of adults (69%) say high school graduation rates are very important.

There is a consensus among school leaders and the general public that multiple measures, including engagement and hope, are important in gauging school effectiveness. Moreover, many school districts across the nation are taking steps to focus on these measures.

In October 2015, Gallup surveyed over 900,000 students from 3,000 participating schools, via the seventh annual Gallup Student Poll. The Web-based, no-cost survey for the nation's fifth- through 12th-graders measures engagement with school, hope for the future and other elements.

While there is no easy path to achieving a school's greatest effectiveness, educators believe that highly engaged and hopeful students have a strong platform for realizing their dreams for the future. Schools can work with parents and community leaders to help measure and promote student engagement and hope. 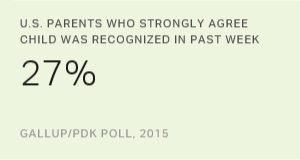 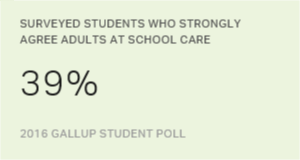