These findings are among those highlighted in a new Google/Gallup report, Current Perspectives and Continuing Challenges in Computer Science Education in U.S. K-12 Schools. This report presents results from the third study in Google and Gallup's multiyear, comprehensive research effort to better understand perceptions of computer science and access to computer science learning opportunities in K-12 schools. The report includes results from surveys of students in grades seven through 12, parents and guardians of students in these grades, teachers, principals, and superintendents.

Educators Think Computer Science Is Just as Important as Other Subjects

Strong majorities of all educator groups think offering computer science courses is just as important to a student's future success as other required courses. Fewer public school teachers (66%) than principals (73%) and superintendents (75%) think it is just as important.

About three in 10 public school teachers (31%) say computer science courses are less important than other required subjects -- such as math, science, history and English -- to a student's future success. Twenty-one percent of principals and fewer than two in 10 superintendents (18%) say it is less important.

Superintendents with large school district enrollments are most likely to think offering opportunities to learn computer science is just as or more important than other required courses. Nearly nine in 10 superintendents from districts with enrollments of over 5,000 students (87%) say computer science education is just as important (82%) or more important (5%) than offering other required courses, whereas 73% of superintendents from school districts with fewer than 1,000 students say the same.

These results suggest administrators are increasingly aware of the critical nature of computer science learning for their students. Results from the 2016 Trends in the State of Computer Science report showed that fewer principals (66%) and superintendents (65%) said offering computer science is just as or more important to a student's future success as other required courses.

Superintendents from large school districts (over 5,000 students) are more likely than those from small districts (fewer than 1,000 students) to say learning computer science is more important than it was three years ago (54% vs. 40%, respectively).

This is the first article in a four-part series that explores results from and implications of the Current Perspectives and Continuing Challenges in Computer Science Education in U.S. K-12 Schools report. Accompanying articles will discuss access, availability and quality, and insights into girls' computer science interests and aspirations.

Margins of sampling error for subgroups are higher. In addition to sampling error, question wording and practical difficulties in conducting surveys can introduce error or bias into the findings of public opinion polls. 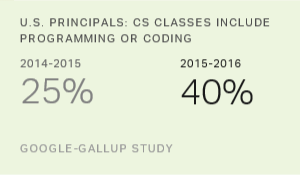 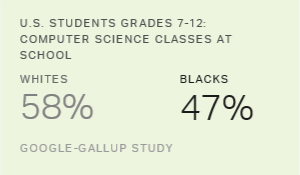 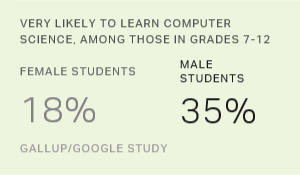