Both Bernie Sanders and Ted Cruz -- strange bedfellows indeed -- agree that the body of which they are members, the U.S. Senate, is dysfunctional and under the control of errant powers. Both men want the system changed so that senators act in ways that directly represent all the people, an idea that certainly fits well with American public opinion. Americans' trust and confidence in government are at or near record lows, and the public would welcome almost anything that would shake up Congress and move it toward being a more effective and efficient entity.

The problem with most revolutions, however, is figuring out what happens once change is brought about. Sanders and Cruz certainly have core convictions on that front. The former argues that the people, once they wrest control away from an all-powerful wealthy elite in this country, would gratefully opt for a major ramping up of government involvement in solving the nation's problems and creating a better life for all of its citizens. Cruz argues that the people, once they take control back from party bosses and the party establishments, would just as gratefully advocate a major disassembling of government in an effort to severely reduce its influence and power.

Both of these polar opposite convictions are decidedly out of sync with public opinion. That may not matter to Sanders and Cruz, who -- like many revolutionaries -- are convinced that they know best, even if the people don't yet recognize it. But that assumption dismisses the collective wisdom of the people who in the long run control a democracy. Better to pay close attention to what the public is telling us, and fashion policy around that wisdom -- rather than operating with blind insistence that one has the received truth.

Government is a complex sociological entity, based on a pooling of individual resources and a ceding of individual power to a collective, under an assumption that this collective entity can better handle the challenges facing individuals than any alternative.

What results is a challenging relationship between a country's citizens and their government -- one of the most intricate of any sociological relationship in modern society. Americans remain torn about what the federal government should or should not be doing. The public eschews simple, sweeping and unrealistic proposals for the way government should work, and recognizes that hard work and slogging compromise are necessary. More than anything else, the public points to the value of a focused and robust debate about the role of government in Americans' daily lives. The Founding Fathers would probably recognize this as a continuing and inevitable part of the philosophical issues with which they wrestled, and would be sympathetic to the dilemma that still exists today.

So where does that leave candidates at the edges of the ideological spectrum like Sanders and Cruz? They can argue that their more extreme positions on the role of government help frame the debate. That may be so. But in terms of actual policy, assumptions that the collective government is evil and should be cut back do not embrace this complexity, nor do simplistic assumptions that the nation would be on board with a major ramp-up of the collective government's power and reach.

Repeated evidence shows that Americans' main recommendation for fixing Congress is that its members should compromise and cooperate more in order to get something done. That, in turn, means Americans in the end want leaders to figure out some middle ground on government.

Practically speaking, it seems far more useful to acknowledge that Cruz and Sanders (and the other candidates) should use the middle, where the public is today, as the starting point for their debate. Then, the candidates can seek to persuade Americans that their views need to slide in one direction (more government involvement in fixing problems) or the other (less government in general). For Sanders, this slide could involve proposals for higher taxes on the rich and more spending on infrastructure, both of which do gain majority approval from Americans. And for Cruz, this slide could involve pushing for a more efficient government and providing alternative ways to create jobs if the government does not do this; these too meet with public approbation. But holding dearly to unrealistic proposals with an accompanying "my way or the highway" attitude is less likely in the long run to result in the type of progress the American public wants to see.

Deciding on the appropriate role of government remains today as central and fundamental a priority as it was in 1776 and thereafter, when the founders were framing the Constitution. 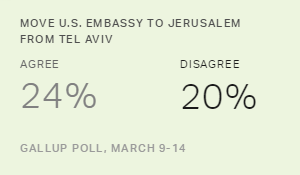 Americans Most Confident in Sanders, Kasich on Economy

Of the five presidential candidates, Americans express the most confidence in Sen. Bernie Sanders (47%) and Gov. John Kasich (46%) to recommend the right thing for the economy. Americans have the least confidence in Donald Trump (30%).