In mid-August, a bare majority of Republicans and Republican leaners (53%) said there was a candidate running for president who would make a good president. This is down seven percentage points from the pre-convention period in mid-July and is the lowest Republican reading so far in 2016. By contrast, 63% of Democrats and Democratic leaners said there is such a candidate in the presidential field, down just slightly from where it stood in July, although also the lowest percentage for Democrats this year. Republicans enjoyed an atypically large presidential field during the primary season, albeit one that dwindled as the months went by, while the Democratic field had been whittled down to just two candidates by February. But Republicans have been either as likely as or less likely than Democrats to say they believe there is a candidate who would make a good president each month since February.

The gap between the two parties on this question was relatively modest during the February-April months but swelled to 21 points in mid-May. This was a time when the GOP primary battle had only recently come to an end: Ted Cruz dropped out on May 3 after his dispiriting loss in the Indiana primary, while John Kasich ended his campaign the next day -- making Donald Trump the presumptive nominee. At that point -- in mid-May -- Gallup found 56% of Republicans believing there was a candidate in the field who would make a good president, a 12-point drop from the month before and well below the 77% of Democrats, whose primary battle between Hillary Clinton and Bernie Sanders raged on. Republicans were apparently less pleased (based on this measure) with the effective end of their race and the choice of Trump, while the Democrats were more pleased with Clinton and Sanders.

Over the next two months, some Republicans presumably warmed a bit to the idea of a President Donald Trump, with 60% saying there was a good candidate in a poll conducted just before the July 18-21 GOP convention. Meanwhile, some Democrats fell out of love with the presidential field, most probably in response to Clinton's victory over Sanders. Though Sanders did not officially concede until mid-July, his already small prospects of winning the Democratic nomination essentially vanished after his June 7 defeat in the California primary. In mid-June, 71% of Democrats thought there was a candidate who would make a good president. In mid-July, after Sanders officially exited the race, that percentage fell slightly to 65%.

Now Republicans have edged below where they were in May -- with 53% saying there is a candidate who would make a good president -- while Democrats are 10 points more positive.

Republicans Following the Campaign "Very Closely" Are Most Pessimistic

Republicans continue to follow the election more closely than Democrats, as has been the case all year. Generally speaking, Gallup has found that partisans who say they are following a presidential campaign "very closely" are among the most enthusiastic supporters of their party's nominee. In August, however, it was these very Republicans -- those following most closely -- who experienced the greatest change on the question of whether there is a potentially good president in the field. In July, 76% of Republicans following the campaign very closely said there was a candidate running for president who would do well as the nation's top official; in August, this statistic had fallen 16 points to 60%. Republicans not following the campaign as closely were no less likely in August to say at least one presidential candidate would be a good fit for the job than they were in July.

Another Gallup tracking measure from mid-August shows that only 22% of Republicans say the election process is working the way it should, the lowest such level of the year for Republicans, and significantly below Democrats' views on the process.

The major implication of Republicans' less-positive reaction to Trump as their nominee is turnout. If Republicans are now less positive about their nominee than they have been, and are less positive than Democrats, could that signify a diminution in the usual GOP turnout advantage in presidential elections? Most likely it is too early to make that projection. For one thing, we know that Republicans' favorable views of Trump have not changed noticeably over the past month -- remaining roughly constant at about the 70% level. So if Republicans are less likely to think that Trump will be a good president, they have shifted in these attitudes while still holding a generally positive underlying view of the billionaire businessman. To that point, nearly half of Republicans (47%) who say there is no candidate who would make a good president also hold a favorable view of Trump, while 48% see him unfavorably. Trump has been showing signs of willingness to change some of his campaign tactics and strategy, and the all-important debates that begin on Sept. 26 could shift Republicans' perceptions once again. 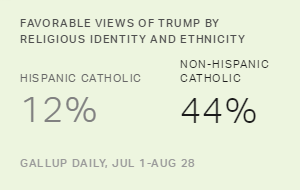 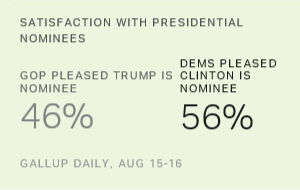