Former Senator Bob Dole died this week at age 98. Journalists, fellow politicians and public leaders have lauded the Kansas-born public figure as someone who spent almost all of his working life in service to his state and country. A review of Gallup polling throughout Dole's long career shows the American public, too, maintained a more positive than negative opinion of the Kansan who, for decades, was a major figure on the American political landscape.

As a young man, Dole was swept up into World War II and eventually found himself as a green second lieutenant in the mountains of Italy fighting the Germans in the last month of the European war. Dole was severely wounded and almost died; he spent years recuperating and never recovered the use of his right arm.

After the war and his rehabilitation, Dole became an enduring, popular figure in his home state of Kansas, whose citizens elected him to public office repeatedly over 36 years. Dole's political career began in 1951 as a member of the Kansas House of Representatives, followed by four terms as a U.S. representative and five as a U.S. senator, beginning in 1968. He served as Senate majority or minority leader for 11 years, from 1985 to 1996. Quite obviously, the people of Kansas liked and revered Dole, and he will be honored at services in the state capital in Topeka and his hometown of Russell this weekend.

Dole's efforts to expand his political career onto the national stage did not fare as well. Dole was rejected by the national voting electorate twice, first as the vice-presidential running mate of President Gerald Ford in 1976 (defeated by the Democratic ticket of Jimmy Carter and Walter Mondale) and then as the Republican presidential nominee in 1996 (defeated by Democratic incumbent Bill Clinton). Dole also ran ultimately unsuccessful campaigns for his party's presidential nomination in 1980 (losing to Ronald Reagan) and again in 1988 (losing to George H.W. Bush).

But despite Dole's national election failures, Americans maintained a positive image of the Kansan throughout most of his career.

Americans' Views of Dole Over the Years

According to the Roper Center for Public Opinion Research, the first national polling about Dole came in 1976 during his campaign as Ford's vice-presidential nominee. Gallup's first question about Dole came in 1982. Dole polling after that was mostly in the context of horse race polls in which he was embedded with lists of other candidates fighting for the GOP presidential nomination or when he was running for president after gaining the nomination in 1996.

Outside of these specific election polls, Gallup asked about Dole 43 times from 1993 to 2003 using our "favorable/unfavorable" personal image question. The results show that Dole's image among Americans was net positive, with an average 52% favorable rating and an average 38% unfavorable rating. Of course, these assessments of Dole's image were taken on a sporadic basis, mainly when he was in the news for one reason or the other, so they are not the type of comprehensive portrait of Dole's image that would have emerged had the public been asked about him yearly.

As is true for most politicians, Dole's image among Americans waxed and waned over the years. Dole was most well-liked in 1994 with a 58% favorable/26% unfavorable rating after the Republicans swept the midterm elections and gained control of the House and Senate for the first time in 40 years. Dole's lowest ratings (42% favorable) came in September and November 1995, just before the first government shutdown in mid-November of that year. The Gallup polls in these two months were the only ones in which Dole's unfavorable ratings exceeded his favorable ones. At one point during his 1996 presidential campaign, Dole's image was close to being underwater at 47% favorable, 47% unfavorable, but his final image measure before Election Day in 1996 was positive, at 50% favorable and 42% unfavorable. By way of contrast, Dole's opponent, incumbent president Clinton, had an even more positive rating just before the 1996 election, at 56% favorable and 39% unfavorable, foreshadowing Clinton's final victory. 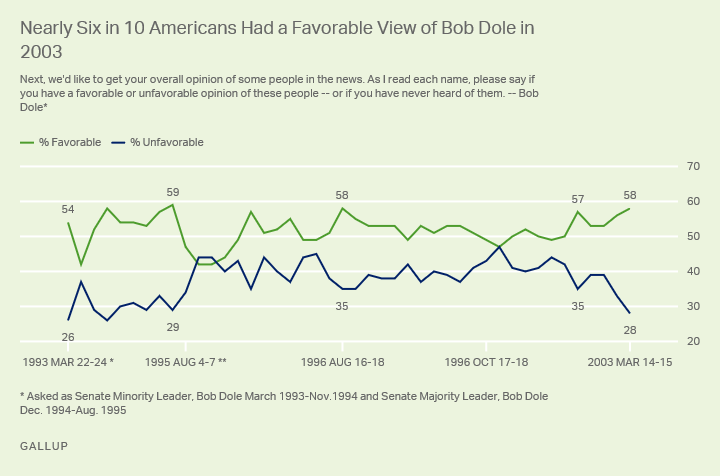 The fact that Dole had a net favorable image even while losing the presidential election in 1996 was not an uncommon event or specific to the 2012 election; every major party presidential candidate who lost an election between 1992 and 2008 had a net favorable rating. This is no longer the case, as Americans have become more and more politically polarized. Losing candidates Mitt Romney in 2012, Hillary Clinton in 2016 and Donald Trump in 2020 had net unfavorable images just before the election.

Dole appeared only once on Gallup's Top 10 most admired man list, in 1995, tied at the bottom of that year's compilation with Jimmy Carter, Norman Schwarzkopf and Nelson Mandela (the most admired man in 1995 was Bill Clinton, followed by Colin Powell and Pope John Paul II). Dole's second wife, Elizabeth Dole, who at various times served as Secretary of Transportation, Secretary of Labor, U.S. senator from North Carolina, and President of the American Red Cross, appeared on Gallup's most admired woman list 11 times, most recently in 2005.

Despite being a fierce and often acerbic partisan, Dole's post-political life included efforts to bring about more bipartisanship in U.S. politics. Projects included founding the Robert J. Dole Institute of Politics at the University of Kansas, whose mission is to "promote political and civic participation as well as civil discourse in a bi-partisan, balanced manner," and cofounding the Bipartisan Policy Center in Washington. Dole also was active as a television spokesperson for various products and, like many ex-politicians, worked as a lobbyist in Washington, D.C.

The last national Gallup poll asking about Dole was in 2003, 18 years before his death, so we don't know how his image may have changed in his later years. But we do know that Americans remained positive about Dole as of 2003, giving him a 58% favorable rating in that year's valedictory survey.