These findings are from Gallup's Nov. 1-16 poll, which was an eventful period for the Biden administration on several fronts. During the poll's field period, the president, fresh from participating in his first G20 summit, spoke at the U.N. climate summit in Glasgow and reaffirmed the United States' commitment to addressing climate change.

Back at home, the off-year election results showed significant Democratic losses amid frustration with the majority party in Washington. Biden's protracted negotiations with congressional Democrats on a $1 trillion infrastructure bill paid off when they passed the bill with modest support from Republicans. This legislative accomplishment was tempered by the news that inflation has hit a 30-year high, gas prices are still elevated and Americans continue to struggle with supply chain issues. Meanwhile, a vaccine for children aged 5-11 was authorized for emergency use, but the COVID-19 pandemic persists, and roughly 30% of U.S. adults have not been fully vaccinated against the disease.

Biden's overall job approval rating is unchanged from last month and remains the lowest of his presidency thus far. It is the third consecutive month of majority-level disapproval. 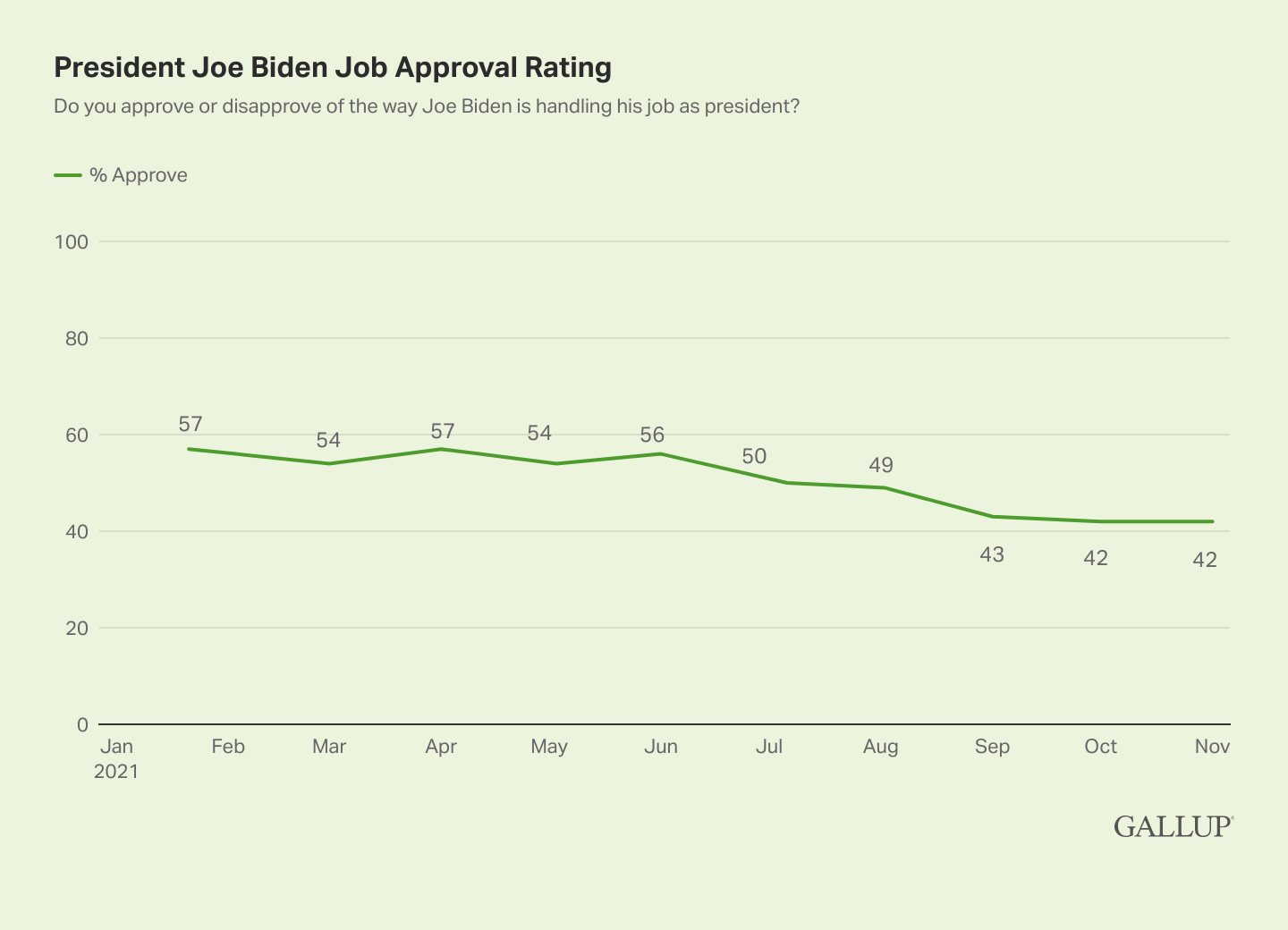 Line graph. Americans' approval of the way Joe Biden has been handling his job as president since January. The 42% of U.S. adults who currently approve of Biden's job is essentially unchanged from September and October but is down from the majority-level readings recorded February through June.

Partisans' latest ratings of the president are roughly the same as last month -- 90% of Democrats, 37% of independents and 6% of Republicans approve of Biden's job. The greatest shift since January has been among independents.

Just as Biden's overall job approval rating has worsened in recent months, so too have his marks on the three issues that Gallup has been tracking since the early days of his presidency -- the response to COVID-19, the economy and foreign affairs.

In February, shortly after Biden's inauguration, majorities of Americans approved of his handling of each of these three issues, Yet, by August, amid the highly contagious delta variant surge, approval of the president's pandemic response had fallen 16 percentage points to 51%. Ratings on his handling of the economy and foreign affairs dropped eight and 10 points, respectively, to 46%.

While the two-point change in U.S. adults' approval of Biden's COVID-19 response since August is not statistically significant, ratings of the economy and foreign affairs have each declined eight points further, to 38%. These decreases between the August and November polls coincide with Americans' worsening views of the economy and declining trust in the federal government's handling of international affairs after the flawed withdrawal of U.S. troops from Afghanistan.

All party groups are currently more critical of Biden on the three issues than they were in February.

Approval of Biden's handling of immigration was first tracked by Gallup in August, and it has fallen 10 points, to 31%, since then. That change is owed mostly to a 15-point decline among Democrats, to 61%, while Republicans' (5%) and independents' (32%) ratings are essentially steady.

This is the first time in Biden's presidency that Gallup has measured ratings of his handling of healthcare policy (44%) and crime (39%). More than seven in 10 Democrats approve of Biden's job on both issues, while about four in 10 independents and less than two in 10 Republicans approve of each.

Roughly ten months into his presidency, Biden's overall job approval rating remains tepid, sharply polarized and historically low on a relative basis. His ratings on a range of key issues are similarly middling and politically divided. While Biden maintains nearly unanimous approval for his overall performance among his base, Democrats' ratings on several issues are faltering. Economic woes, perceived missteps in the withdrawal from Afghanistan, and continuing debates about the southern border of the U.S. and refugees from other countries are all weighing on Americans' minds. The pandemic is another serious pain point for the U.S., and cases are once again rising.

It remains to be seen how much the infrastructure law, and possibly the social services legislation Democrats are still negotiating, will benefit Biden's approval rating once those policies are implemented. While it is unlikely that Republicans' ratings of Biden will increase much regardless of what he does, he could regain the approval of independents and build upon his strength with Democrats.