WASHINGTON, D.C. -- Americans' confidence in the economy continues to weaken, and their mentions of a variety of economic issues as the nation's most important problem are rising -- even as a record-high 74% say it is a good time to find a quality job.

These findings, from an Oct. 1-19 Gallup poll, come when there has been a sharp rise in the U.S. inflation rate, to a 13-year high, due partly to continued supply chain issues brought on by the COVID-19 pandemic. Although COVID-19 cases in the U.S. began to wane in recent weeks, the economic effects persist as employers in many industries struggle to fill job openings. Meanwhile, the U.S. unemployment rate dipped slightly to 4.8% in September, the lowest reading since March 2020, before nationwide shutdowns resulted in unprecedented joblessness.

Gallup regularly tracks Americans' ratings of national economic conditions as excellent, good, only fair or poor, and whether the economy is getting better or getting worse. The combined responses are used to create the Gallup Economic Confidence Index, which has a theoretical range of +100 (if all respondents say the economy is excellent or good and that it is getting better) to -100 (if all say it is poor and getting worse).

Before the eruption of COVID-19 in the U.S., confidence was high, registering +41 in February 2020, the best reading since 2000. By mid-March, as the U.S. began to deal with the spread of COVID-19, economic confidence had fallen to +22. Confidence bottomed out at -33 in the latter half of April amid widespread business and school closures in the U.S.

Since then, confidence has fluctuated but has not risen above the +2 recorded in April 2021. The current -25 reading is the lowest since -33 in April 2020 and -28 the next month, when unemployment was spiking. The index has now fallen at least marginally for four consecutive months. 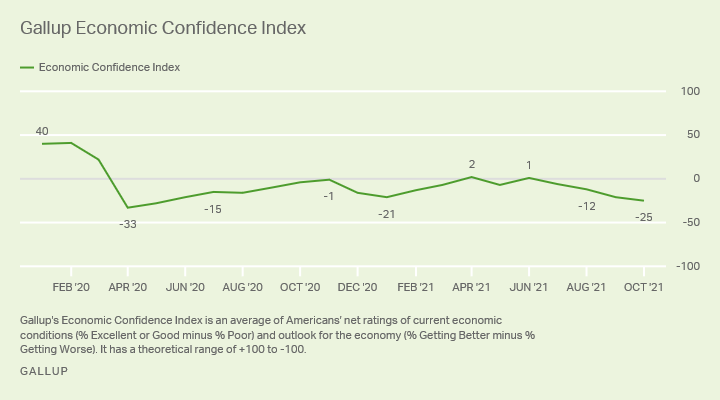 The most recent dip in confidence is largely owing to a five-point increase in the percentage of Americans saying the economy is getting worse, from 63% to 68%. Independents' outlook has worsened, while Democrats' and Republicans' are essentially unchanged. In September, 63% of independents said economic conditions were getting worse, and in October, that grew to 72%.

Three-quarters of Americans rate current economic conditions in the country as only fair (42%) or poor (33%), and 68% say the economy is getting worse.

Economic Issues Rise as Top Problem and COVID-19 Edges Down

The government or poor leadership is most often mentioned as the top problem facing the U.S., cited by 21% of Americans. With COVID-19 vaccinations up and cases falling after the summer surge, mentions of the disease have dropped six points, to 15% (but are still slightly above the 12% in July as the delta surge was beginning).

Immigration (11%), unifying the country (7%), the federal budget deficit (6%), the economy in general (6%), inflation (5%), race relations (5%), unemployment (4%) and moral decline (4%) are the next-most-mentioned issues. Immigration, the budget deficit and inflation have edged up four points each since last month.

The upticks in citations of the deficit and inflation are largely responsible for an increase in mentions of any economic issue -- from 16% in September to 24% in October. The percentage of U.S. adults mentioning any economic issue as the most important has not been this high since April 2017, although the 23% figure from last June is similar to the current reading. 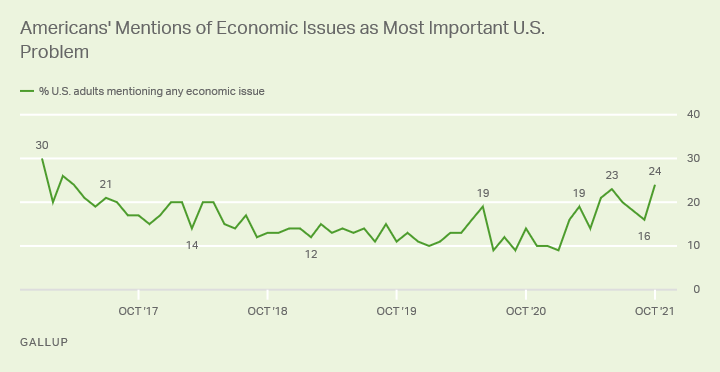 Line graph. Percentage of Americans mentioning an economic issue as the most important problem facing the U.S. since 2017. The current 24% from October 2021 is an eight-point increase since September and the highest since 2017.

COVID-19 remains the top issue among Democrats (25%), while government/poor leadership (27%) and illegal immigration (23%) are mentioned most by Republicans, and independents cite government most (21%). Republicans and independents are more likely than Democrats to name economic issues like the federal budget deficit and inflation as the nation's most important problem.

Although Americans this month are more pessimistic about the U.S. economy, a record-high 74% say now is a good time to find a quality job. While this is not statistically different from the 72% recorded in August, it is the highest point numerically.

The latest readings represent a remarkable recovery in the public's views of the job market from the unprecedented 46-point plunge between the January (68%) and April 2020 (22%) readings. That April reading in the early weeks of the pandemic, though low, is not near the 8% to 10% lows recorded between 2009 and 2011, during and after the Great Recession that saw a sustained period of high unemployment. 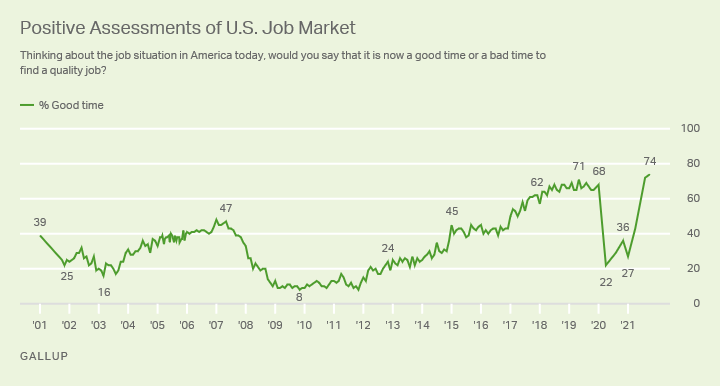 Americans' confidence in the nation's economy remains low and continues to decline, despite low unemployment, record-positive perceptions of the job market, solid economic growth as measured by the gross domestic product, and continued high stock values.

Throughout the past 19 months, confidence has fluctuated based on the trajectory of the pandemic and its effects on businesses and employment, as economic indicators such as the unemployment rate and GDP have shown large swings early in the pandemic and uneven trends since then. The latest economic confidence figures suggest the negative aspects of the economy -- particularly inflation but also the related increase in gas prices, a worker shortage and the supply chain challenges -- are outweighing the positive aspects of the economy.