WASHINGTON, D.C. -- Americans' lack of confidence in government may be related, in part, to a waning trust in the elected decision-makers who are ultimately responsible for how government functions, along with the voters who put them in office.

Less than half of U.S. adults (44%) say they have a great deal or fair amount of confidence in people who hold or are running for public office, rivaling the record low of 42% from 2016. Meanwhile, a small majority (55%) express a similar level of confidence in the judgments of the American people under the democratic system, the lowest Gallup has measured to date but not meaningfully different from 56% readings in 2016 and 2020. 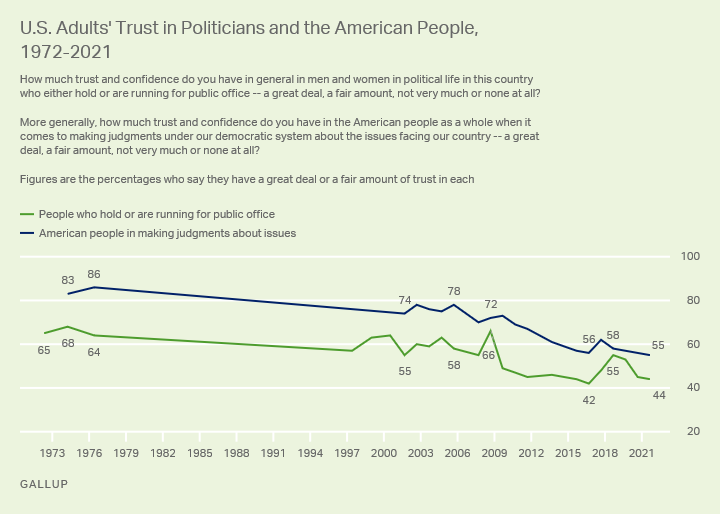 These data are from Gallup's annual Governance poll, conducted Sept. 1-17.

Gallup's trends on these measures, dating back to 1972 (for politicians) and 1974 (for the American people), reflect a continuing decline in confidence in politicians and voters over the ensuing decades. Americans have been consistently more likely to express trust in voters than in people who hold or are running for public office, but both trends have generally ebbed in the 2000s and again in the 2010s.

Trust in Americans' Judgment Down Among All Party Groups

Confidence in the American people to make judgments under the democratic system has declined across all party identification groups over the past two decades.

Independents have tended to express slightly less confidence in the American people's judgment than have Democrats and Republicans. 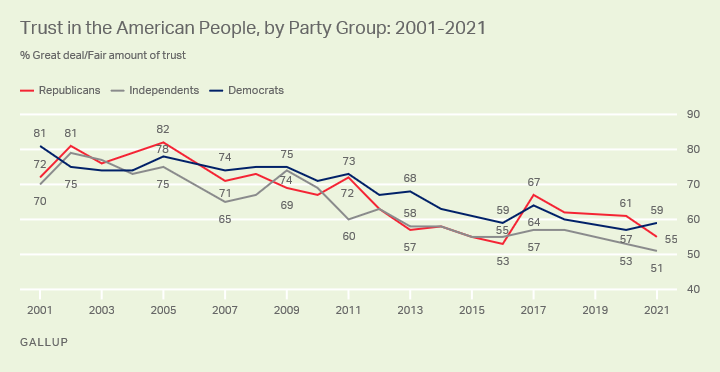 At the beginning of the millennium, Republicans and Democrats expressed similar levels of trust in people who hold and run for political office. But after Barack Obama's election to the White House in 2008, Republicans' confidence in politicians plummeted and has yet to get back to its former level. Gallup has recorded double-digit gaps between the two parties' levels of confidence in most years since, including a 25-point difference between Democrats (64%) and Republicans (39%) in the latest poll -- one of the largest gaps Gallup has found.

Independents have nearly always been the least likely to express trust in politicians, however -- including 34% this year. 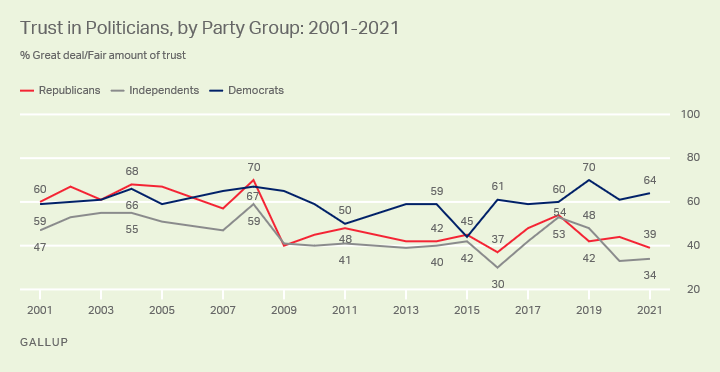 Line graph. The U.S. public's trust in American politicians who hold or are running for office, by political affiliation. In 2021, 64% of Democrats, 39% of Republicans and 34% of independents have confidence in politicians to make judgments about issues facing the country.

Americans' confidence in institutions, government and its agencies has suffered over the past year, but these ratings are also low from a long-term perspective. These collective findings reflect a larger cynicism toward governmental institutions and the figures who represent and direct them -- as well as the U.S. voters who put them in decision-making roles.

Republicans and independents, in particular, have become even less trusting of politicians over the past 13 years, creating a great deal of distance between them and their Democratic counterparts.

Most U.S. adults remain trusting of the American people's judgments, but this majority has gotten slimmer over time and is on track to dip below the 50% mark later this decade if the trend continues -- possibly creating a crisis for overall confidence in the U.S. democratic system.