skip to main content
Polling Matters
Americans' Trust in Themselves

My Gallup colleague Justin McCarthy noted in a recent analysis that Americans' trust and confidence in the American people themselves to make judgments under the democratic system remains quite low. This trust measure is still in majority territory at 55%, but that's significantly lower than the 80%-plus readings at the two times Gallup measured it in the 1970s, and the 78% readings at a couple of points in the 2000s after 9/11. Americans' trust in the people themselves has been under 60% in six of the seven years since 2014.

As Justin notes in his conclusion, if Americans lose more trust in themselves in the years ahead, it could possibly create a "crisis for overall confidence in the U.S. democratic system."

Of course, there are other data from Gallup's September Governance survey showing there is already a crisis of confidence in a number of aspects of the U.S. democratic system -- across several dimensions. These include low levels of confidence in the federal government to handle domestic and international affairs, low levels of confidence in the legislative and executive branches of government, and relatively low favorable ratings for both major political parties. Less than a third of Americans say they are satisfied with the way the nation is being governed, and Americans perceive that government and government leadership rival COVID-19 as the most important problem facing the nation.

These two levels of Americans' trust and confidence -- in the people and in the government they elect -- are of course highly interlinked under the American system of democratic representation, similar to the way in which the board of directors of a company and the executives who actually manage the company are interlinked. If a company performs poorly, the board is responsible because it appoints and oversees the company's managers. In terms of government, the people are ultimately responsible for the way in which the government is working because they (the people) elect and send off to Washington the men and women who run it.

The entire representative democratic system operates under the broad premise that the collective views of the people themselves, although far from perfect, are a better way to control governance than any other way one can think of (including, for example, dictatorships or rule by inherited royalty).

Gallup trend data confirm the linkage between Americans' views of themselves and views of the federal government. Over the years since 1974, the trend line showing trust in the legislative branch of government is quite similar to the trend line showing trust in the American people themselves. The statistical correlation between the two variables over time is .87, a very high number reflecting the degree to which the two measures have moved in lockstep with each other. 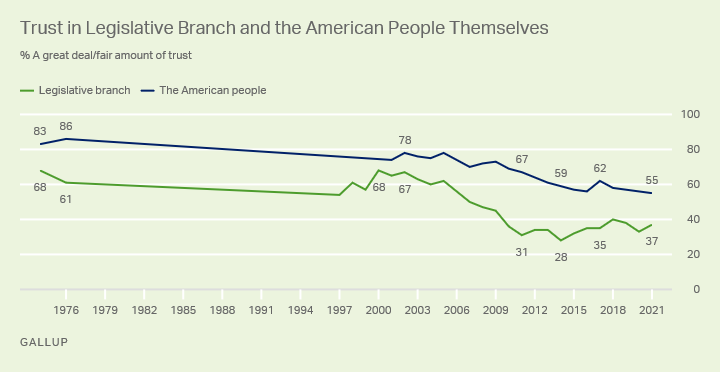 There is a similar correlation (.83) between the trends in Americans' trust in themselves and trust in the "men and women in political life in this country who either hold or are running for public office," as illustrated graphically in Justin's analysis. In short, Americans are taking some of the blame on themselves for the way government operates. As trust in government and politicians has dropped, so has the trust the American people have in each other. 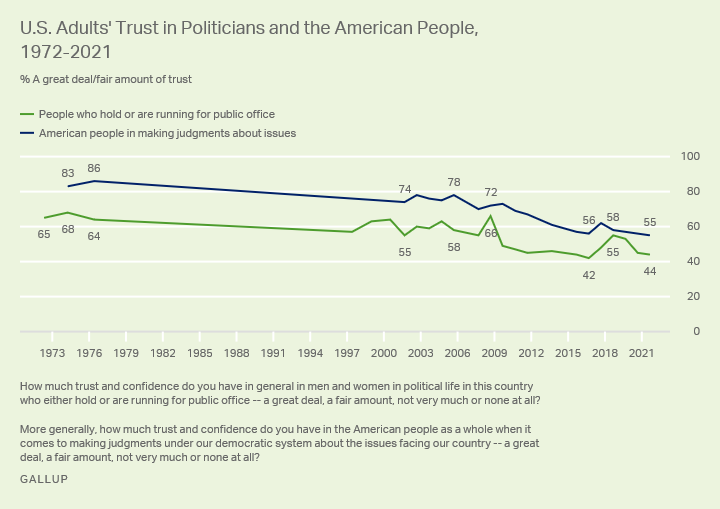 At the same time, and I think this is important, Americans have always expressed more confidence in themselves (i.e., the American people) than in the legislative branch of government and the people elected and sent to Washington. In Gallup's September update, for example, 55% of U.S. adults have trust in the judgment of the American people, compared with 37% who trust the legislative branch and 44% who trust the men and women in political life.

This is not a new insight. Many thoughtful scholars, journalists and observers over the years have pinpointed reasons why the system of representative democracy is not working as well as it could or should -- including the ways in which congressional districts are created and gerrymandered (much in the news now as state legislatures are in the process of redrawing districts based on the new 2020 Census data), the primary process in which the vote of relatively small percentages of the population essentially control who is ultimately elected, and the development of highly partisan news sources that provide incentives for elected representatives to play to smaller niches rather than the people as a whole.

Dr. George Gallup in 1978 suggested a number of reforms in the political process that would increase the connection between the people themselves and their government. We tested several of these back in 2013; my colleague Jeff Jones summarized the results:

Americans have long supported specific reforms to the political system that would increase the influence of average citizens and decrease the sway of elected representatives, political parties and special interest groups. These reforms include national issue referenda, campaign finance reform and basing the presidential election outcome on the popular vote. Perhaps it is not surprising Americans would favor steps that would make their voices more influential in determining government policy.

None of these reforms, of course, have become reality -- leaving us today with the persistent findings that Americans a) have low levels of trust in their federal government, and b) trust themselves in terms of providing guidance for democracy more than they trust the men and women sent to Washington to run the federal government.

The Role of Partisanship

Most measures of the people's views of government are highly partisan, with big swings in the gap in confidence between Republicans and Democrats depending on which party is in control of government. In Gallup's September survey, for example, 75% of Democrats said they have confidence in the federal government's ability to handle international affairs, compared with 15% of Republicans. The gap is similarly large in terms of confidence in the government's ability to handle domestic affairs and in terms of satisfaction with the way the nation is being governed.

This reflects the fact that the underlying political composition of the American people does not change dramatically from election cycle to election cycle, despite the fact that those who vote end up tilting the results in one way or another. The political composition of the people of the country is also fairly evenly balanced -- 30% Democratic identification, 29% Republican and 39% independent in 2020. Thus, there is no inherent reason why Americans who identify with one party should be particularly more positive or negative about the people themselves than those who identify with another party.

We also don't see a lot of differences in Americans' confidence in the people themselves by other demographic categories. Older people (50 and above) are somewhat more confident in the people than are those under 50, but there are few meaningful differences by education, by region of country or by how closely one is following politics.

Americans have in recent years become more negative about their government and have concomitantly become more negative about the ability of the American people as a whole "when it comes to making judgments under our democratic system about the issues facing our country." There are many plausible reasons for these downward trends in confidence, but whatever the cause, they represent a fundamental challenge for the nation and its future.

But -- and perhaps this is good news -- Americans' confidence in the people themselves remains significantly higher than confidence in the legislative and executive aspects of the federal government and in the men and women who are elected to or running for federal office. Establishing better ways in which the wisdom of the people can be translated into election outcomes, in short, could represent one way to stem the tide in rising cynicism and loss of faith in government.

Perhaps there is some hope along these lines. Pew Research last year found a majority of Americans saying that they -- that is, Americans themselves -- can always find ways to "solve our problems and get what we want."