WASHINGTON, D.C. -- Americans' opinions of the Democratic Party have fallen slightly from an elevated level this year, and more again view the party unfavorably (55%) than favorably (43%). Meanwhile, 56% have an unfavorable view of the Republican and 40% a favorable one. .

The three-percentage-point gap in party favorable ratings is down from 11 points earlier this year, shortly after President Joe Biden's inauguration and as the Senate was preparing to try former President Donald Trump on impeachment charges for his actions related to the January 6 Capitol Hill riot. At that point, the Democratic Party had a 48% to 37% edge in favorability.

The latest results are from a Sept. 1-17 Gallup poll, conducted in the wake of the chaotic U.S. withdrawal from Afghanistan, a continuing surge in U.S. coronavirus cases and an uneven economic recovery. As a result, President Joe Biden's job approval rating has fallen to the lowest of his term.

As might be expected, Democrats' (92% favorable) and Republicans' (5% favorable) opinions of the Democratic Party are essentially unchanged, from 94% and 4%, respectively, in January.

The Republican Party's current favorable rating among all Americans is little different from the 37% recorded in January. Its favorable rating then was down six points from the prior reading in November 2020, shortly after Election Day.

Historically, Americans have been more positive toward the Democratic Party than the Republican Party. Since 2009, the average favorable rating for the Democratic Party has been 45%, compared with 40% for the GOP. Thus, the parties' current images are similar to the recent historical average.

Both parties are viewed more negatively now than they were in prior decades. From 1995, when Gallup first began routinely tracking party favorability, until 2008, the Democratic Party averaged a 54% favorable rating. Over that same period, the GOP's favorable rating was 47%, but that included several years where their average rating exceeded 50%, including 1995, 1996, 2000, and 2002 through 2004. 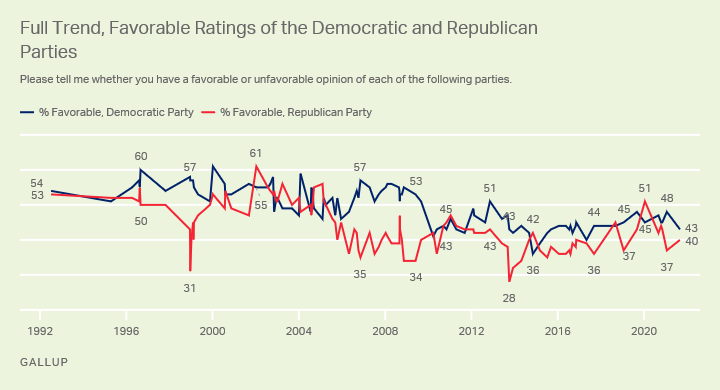 Republicans Less Favorable Toward Their Own Party Than Democrats Are

The Democratic edge has been evident in nearly every Gallup poll over this time. Last year was a notable exception, with Republicans giving their party higher ratings than Democrats gave theirs in three polls conducted between January and October 2020, when Trump was running for reelection. 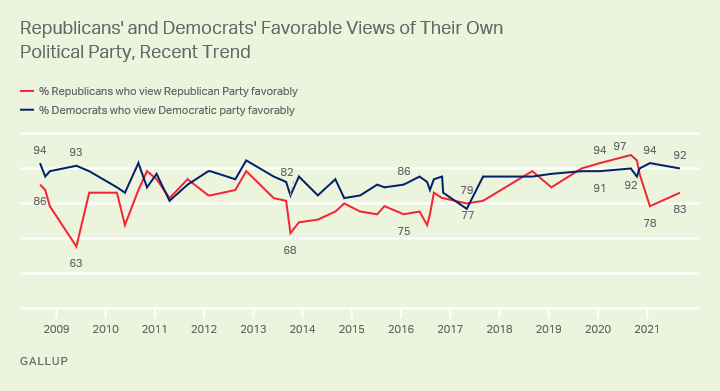 Democrats' favorable ratings of the Democratic Party have not averaged below 83% in any year since 2008. In fact, they have only fallen below 80% only once in any individual survey -- in May 2017, early in Trump's term when the GOP had control of both houses of Congress and the House voted to repeal the Affordable Care Act. The GOP-led Senate ultimately did not vote for repeal, and the law was left in place.

By contrast, Republicans' favorable ratings of their own party have often been below 80%, including averaging less than 80% each year between 2013 and 2016.

On two occasions since 2009, Republicans' favorable ratings of the GOP have fallen below 70%, including 63% in May 2009 after the party suffered major losses in the 2008 elections and 68% during the GOP-led federal government shutdown in October 2013.

Another reason the Democratic Party usually holds an edge in favorability among all U.S. adults is that more independents typically view the Democratic Party positively than view the Republican Party positively. Democrats' advantage with independents has been modest in most years, averaging four points since 2008, 38% to 34%. There have been double-digit gaps in some individual surveys, including in 2009, 2016 and 2021.

The current survey marks one of the rarer times that independents' ratings of the two parties have been the same. 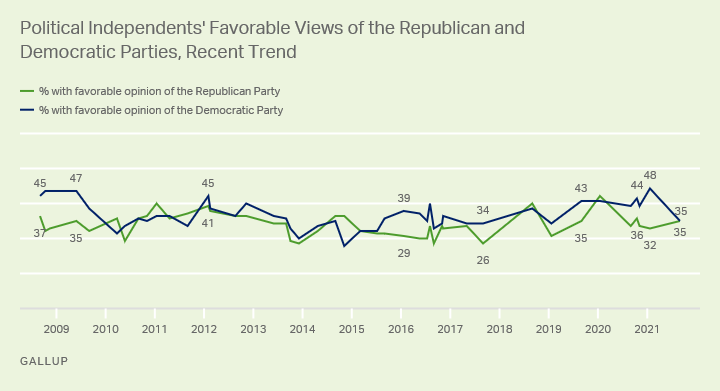 Americans hold neither party in high esteem, which has typically been the case in the past decade and helps explain the rise in independent political identification.

After a slightly higher than average image score for the Democratic Party earlier this year, Democratic favorability has slipped back to more normal levels. Biden's recent struggles have likely not helped the Democratic Party's image, although it remains close to what it was before he was elected, as does the GOP's image.

Party favorable ratings often provide clues as to how upcoming elections might go and will be an important indicator to watch as the 2022 midterm elections draw near. At this point, about a year before those elections, both parties have work to do to improve their images and convince voters to support their candidates for office.