WASHINGTON, D.C. -- Americans' trust in the media to report the news fully, accurately and fairly has edged down four percentage points since last year to 36%, making this year's reading the second lowest in Gallup's trend.

In all, 7% of U.S. adults say they have "a great deal" and 29% "a fair amount" of trust and confidence in newspapers, television and radio news reporting -- which, combined, is four points above the 32% record low in 2016, amid the divisive presidential election campaign between Donald Trump and Hillary Clinton. In addition, 29% of the public currently registers "not very much" trust and 34% have "none at all." 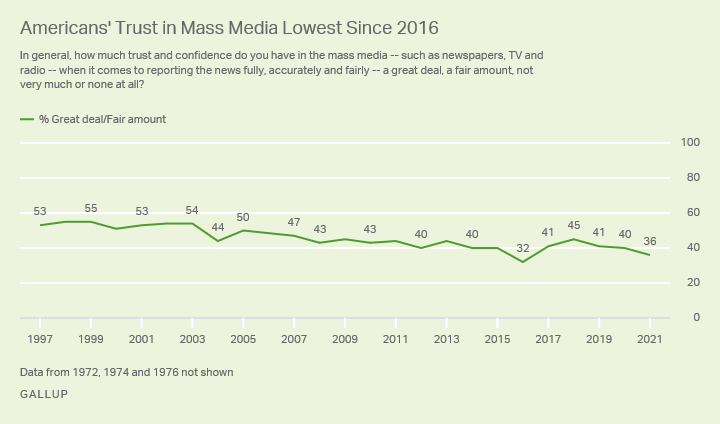 After hitting its lowest point in 2016, trust in the media rebounded, gaining 13 points in two years -- mostly because of a surge among Democrats amid President Donald Trump's antagonistic relationship with the press and increased scrutiny of his administration by the media. Since 2018, however, it has fallen a total of nine points, as trust has slid among all party groups.

Partisans' trust in the media continues to be sharply polarized. Currently, 68% of Democrats, 11% of Republicans and 31% of independents say they trust the media a great deal or fair amount. The 57-point gap in Republicans' and Democrats' confidence is within the 54- to 63-point range for the two groups since 2017.

While both Democrats' and independents' trust has slid five points over the past year, Republicans' has held steady.

Historically, Republicans' confidence in the accuracy and fairness of the news media's reporting has not risen above 52% over the past quarter century. At the same time, Democrats' confidence has not fallen below the 2016 reading of 51%. For their part, independents' trust in the media has not been at the majority level since 2003. 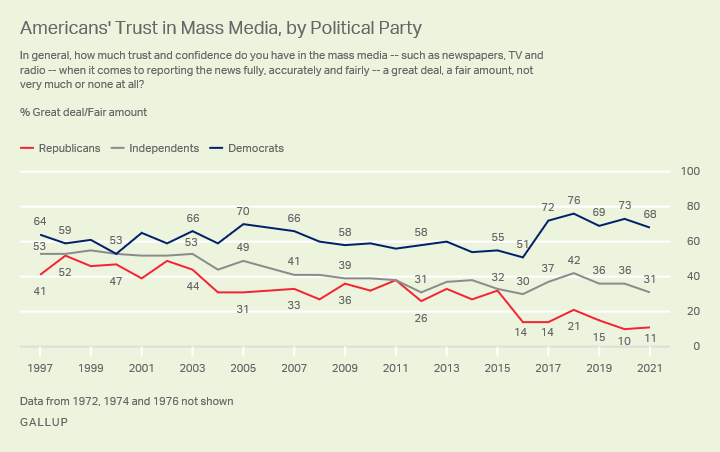 Line graph. Partisans' trust in the mass media when it comes to reporting the news fully, accurately and fairly, since 1997. In 2021, 68% of Democrats, 31% of independents and 11% of Republicans have a great deal or fair amount of trust in the mass media. Republicans' trust is one percentage point higher than the previous low, recorded last year. Democrats' trust is now eight points lower than their highest on record, from 2018, and independents' trust is one point higher than their record low.

Just as Americans' trust in the three branches of government is faltering, so too is their confidence in the fourth estate -- the media. Confidence in the media among Republicans over the past five years is at unprecedented lows. After a brief recovery in trust among Democrats and independents early in the Trump administration, their trust has fallen off a little in recent years. Democratic trust remains well above where it was before Trump came into office and made attacks on the media a core message of his presidency.