WASHINGTON, D.C. -- Gallup's annual measure of Americans' attentiveness to national political news, updated each September, reveals a populace more focused on political news at the time of this year's poll than is usual for a year in which there is no presidential election. The poll also shows Republicans regaining the slight edge in attentiveness after the Trump era, when Democrats had mostly led.

Thirty-eight percent of U.S. adults polled in the Sept. 1-10 survey say they follow news about national politics very closely, and 40% follow it somewhat closely. Another 16% follow it not too closely and 6% not at all.

While down from 42% in September 2020 as the presidential election was in full swing, the 38% following the news very closely this fall is the highest Gallup has recorded in a nonpresidential year, in trends dating to 2001.

Nearly as many adults, 36%, paid attention this closely in 2009 and 2017, the first years after Barack Obama and Donald Trump, respectively, were elected. But attention was significantly lower in 2001 and 2005 (during George W. Bush's presidency) and in 2013 (at the start of Obama's second term). 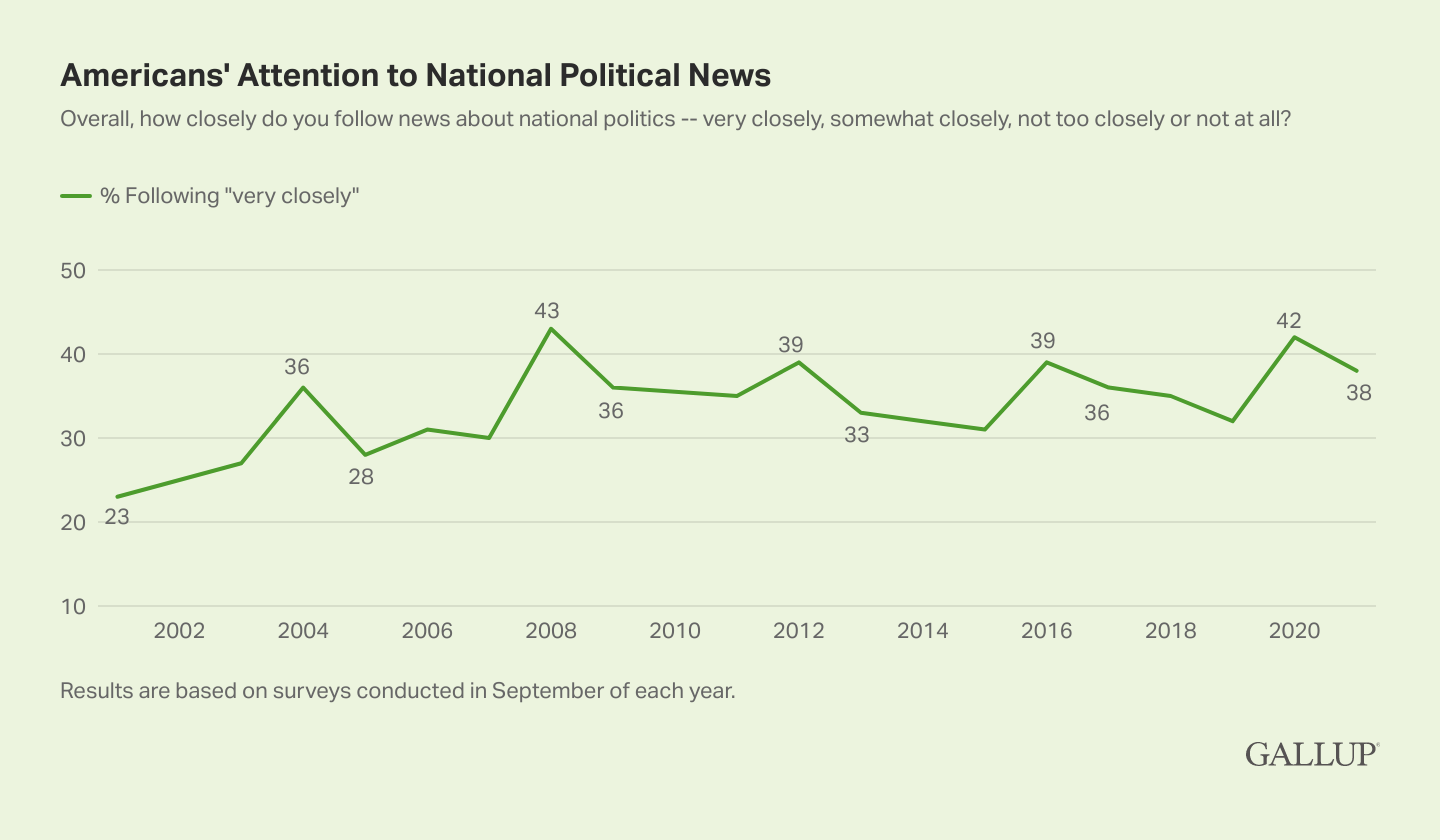 Line graph. Annual trend from 2001 to 2021 in percentage of Americans following news about national politics "very closely," including 38% in 2021. Percentage has ranged from a low of 23% in 2001 to a high of 43% in 2008. Attention has been higher in each presidential election year than in other years immediately before and afterward.

News Attention in 2020 Was Among Highest for Presidential Election Years

Americans have paid closer attention to national political news in presidential election years than they have in the off years. But the 42% following the news very closely in 2020 was the highest since 2008, when 43% were attentive. That was amid the hotly contested election between Obama and John McCain. Aside from 2008, close attention in presidential election years, as measured by Gallup each September since 2001, had ranged from 36% to 39%.

Since 2017, Partisans More Tuned In After Losing White House

Following the national pattern seen since 2001, Republicans' and Democrats' attention to news spiked in each of the past five presidential election years, from 2004 to 2020. Attention then waned among both groups in the years after the 2004, 2008 and 2012 elections.

However, the pattern of postelection complacency broke in 2017, when Democrats' attention remained high (at 45%, similar to their 42% in 2016) during Trump's first year in office. By contrast, Republicans' attention in 2017 followed the usual pattern, falling 11 points to 35%.

The reverse has occurred in the latest election cycle, with Republicans' attention remaining as high today, during President Joe Biden's first year in office, as it was in 2020 (steady at 45%). Meanwhile, Democrats' attention has declined 11 points to 40%. 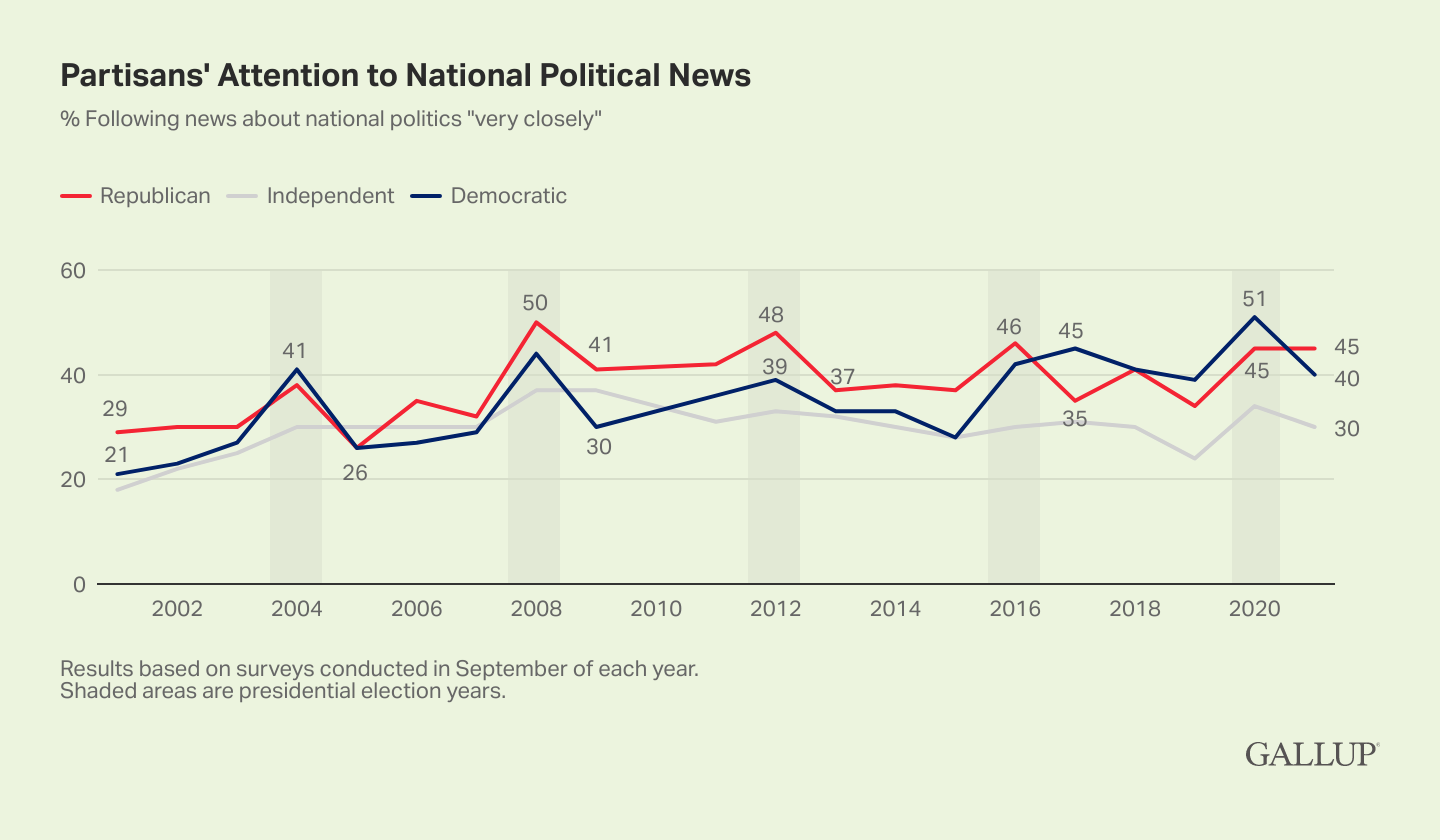 In addition to the similar percentages of Democrats and Republicans who are now following political news very closely, the attention rates are also nearly identical between men and women.

At the same time, attention varies substantially by age, income and education.

Attention to political news in nonpresidential years has increased over time among all age groups, but since 2001 -- a postelection year -- the percentage following it very closely has increased slightly less among 18- to 34-year-olds (rising 10 points, from 12% to 22%) than among those 35 to 54 years (+16 points) and adults 55 and older (+15 points).

Only in 2008 has the percentage of 18- to 34-year-olds who follow news about politics very closely exceeded 24%. That was likely related to young adults' strong affinity for Barack Obama in his first presidential campaign. But the 32% attention score that year has proved unique, as young adults' attention reverted to its prior low levels in 2012 and has remained low in all subsequent presidential election years. 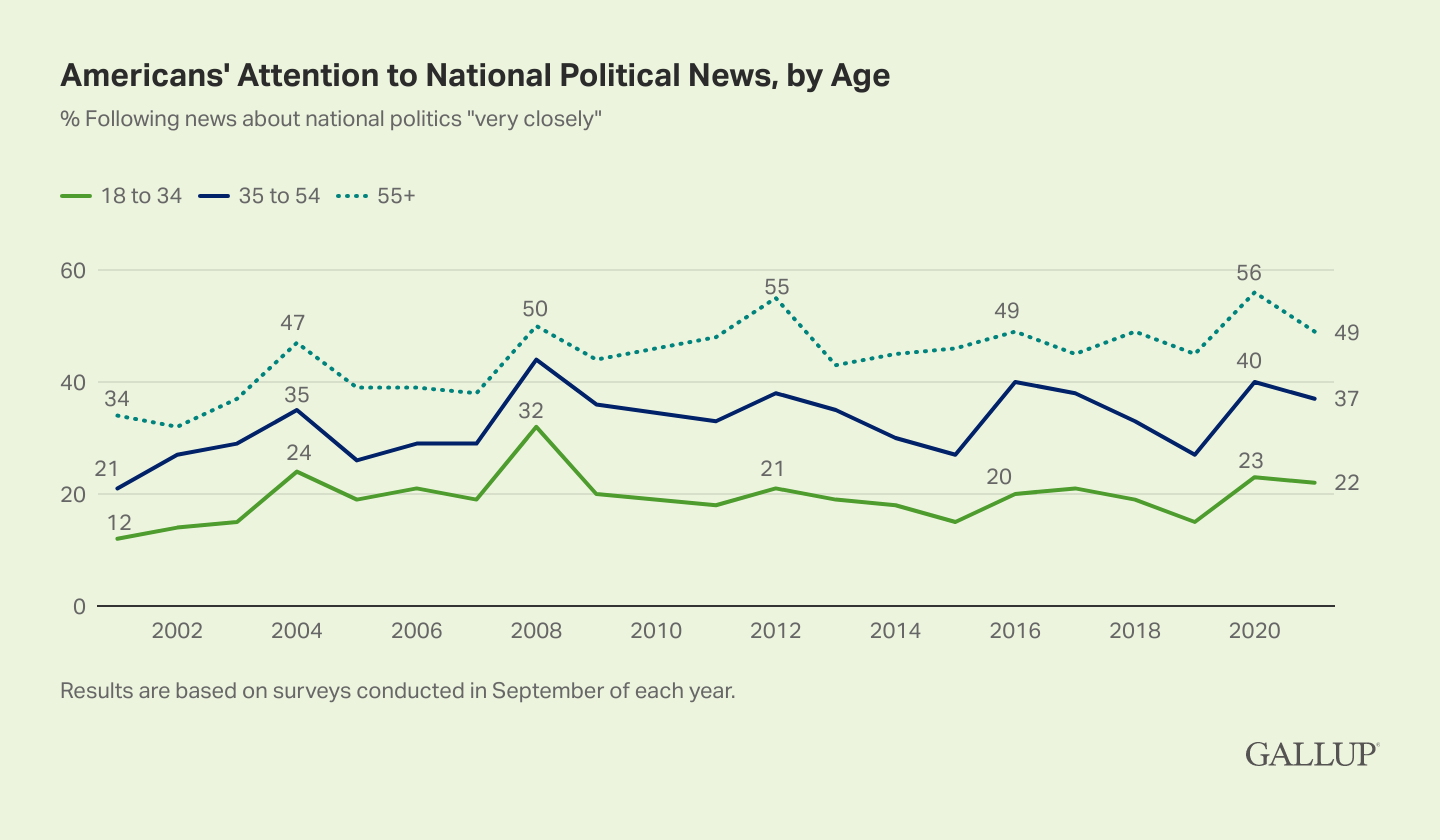 Line graph. Annual trend from 2001 to 2021 in attention to national political news by age. Over this period, attention has consistently been highest among adults aged 55 and older, and lowest among those 18 to 34, while attention among those aged 35 to 54 has been between the other two groups. In 2021, 49% of older adults, 37% of middle-aged adults and 22% of younger adults report following the news "very closely."

Americans follow the news more closely in presidential election years than in the intervening years. But the losing side has taken less of a breather after each of the past two elections. Republicans are maintaining heightened attention today, after Trump's loss to Biden in 2020. Similarly, Democrats' attention remained high in 2017 after Hillary Clinton's loss to Trump.

How much partisans' fixation on the news relates to their likelihood of voting isn't clear, particularly by the time of the first midterm elections after a presidential election loss. But Republicans' slight edge this fall in paying close attention to political news could be a factor in their party's better-than-expected results in several state and local elections, most notably the Virginia and New Jersey governor's races.