WASHINGTON, D.C. -- The policy disagreements that have stalled Democrats' passage of infrastructure and budget bills in Congress echo the mix of political viewpoints that exists among Democrats nationally. Here are five key insights about the Democratic Party's ideological diversity today.

1. The Democratic Party is more varied politically than the Republican Party.

Whereas Republicans nationwide are highly unified in their ideological outlook, with most (75%) identifying as conservative, Democrats are more fragmented. According to Gallup data collected thus far in 2021, the largest subgroup of Democrats are those who describe their political views as liberal, at 51%. The other half are mostly self-described moderates (37%), along with a small group of conservatives (12%).

Independents are also split, with just under half (48%) identifying as moderate, 30% as conservative and 20% as liberal in 2021.

2. Liberals have had the momentum among Democrats.

The Democratic rank and file has long encompassed a wide diversity of perspectives, but the power center has shifted from moderates -- who were the largest group in the early 2000s -- to liberals, who are the largest group today. Still, no ideological faction has enjoyed solid majority status over the past two decades.

The percentage of Democrats identifying as politically liberal increased fairly steadily from 30% in 2001 to 50% in 2017. It has remained there since then, including today's 51%. As their numbers have expanded, liberals have edged out both moderates and conservatives. But moderates have been holding steady near 38% since 2013, while conservatives have become even more scarce. 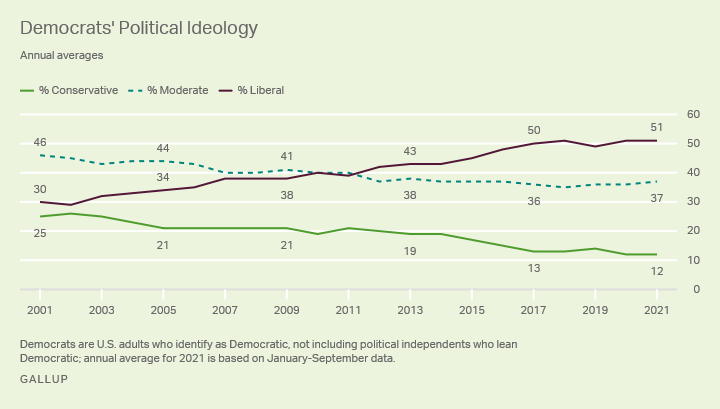 In contrast to the Democratic Party, which has had to adjust to a shifting ideological balance among its members, the solid majority of Republicans have identified as conservative for more than two decades.

Each year in May, as part of its annual Values and Beliefs poll, Gallup asks U.S. adults to describe their views on economic and social issues separately, rating each as liberal, moderate or conservative.

On economic issues, Democrats nationally are about evenly split between those identifying as moderate (43%) versus liberal (41%), with 16% identifying as conservative.

Democrats' views on economic issues have been moving left over time, rising from 24% to 41% liberal. Most of this has been offset by a decline in the proportion of economic conservatives, with little change in moderate identification. As a result, the liberal wing of the party is now on par with the moderate wing. 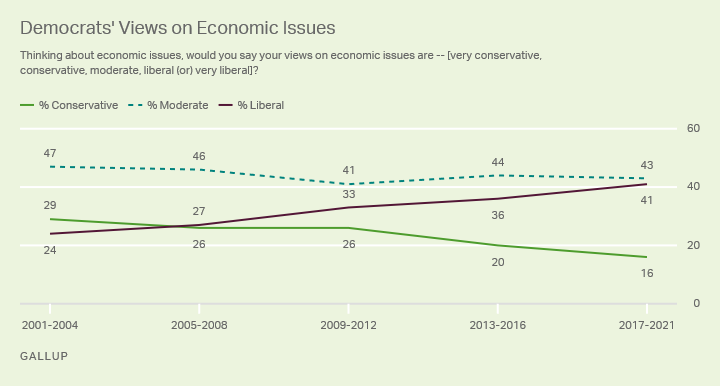 4. Democrats favor active government, but disagree on its scope.

Separately, Gallup finds that most Democrats are pro-government, in terms of wanting government to actively address issues facing the country. But they are not unified on whether government should grow to the point of potentially raising taxes.

As Gallup recently reported, 78% of Democrats say the government should be doing more to solve the country's problems, while just 18% say it is doing too many things that should be left to individuals and businesses. On this point, Democrats are as unified about wanting a more active government as Republicans are about wanting less government (80%).

Yet, in a separate question asking Americans which of three scenarios for government spending and taxes they would prefer, Democrats are closely split.

Thus, for Democrats nationally, the question is not whether government should do more, but how much more and at what cost. 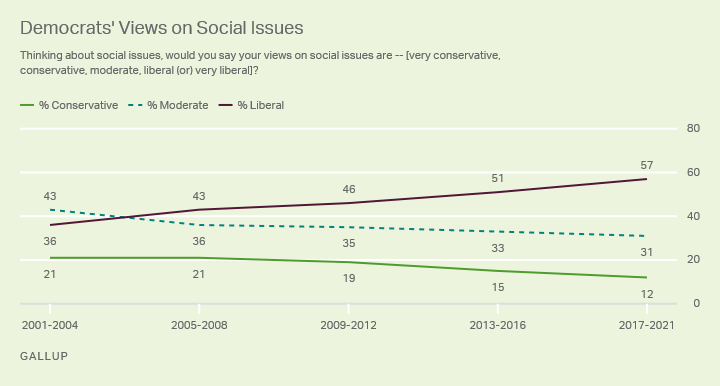 The difficulty Democratic leaders have had this year in bringing progressive and centrist members of Congress together to achieve certain policy goals in some ways reflects the diverse nature of Democrats nationally.

The liberal wing of the party has had considerable momentum during this century. But despite its gains, it now represents half of all Democrats, with the other half still identifying as moderate or conservative. And while the party is now solidly liberal on social issues, it remains politically fragmented on economic issues.

Although having such a diverse political makeup has its challenges, that diversity could be helping the Democratic Party maintain its edge over Republicans in party affiliation. Even as the two parties are closely split when it comes to firm party identifiers, Democrats have held the significant edge in leaned party for most of the past two decades, including by 48% versus 42% so far this year.

This analysis is based on combined data from Gallup’s multiday cross-sectional national telephone polls conducted each year from 2001 through 2021. The surveys are representative of adults aged 18 and older, living in the 50 U.S. states and District of Columbia. The results are summarized in annual and multiyear periods that include interviews with more than 12,000 national adults (for annual results) and more than 50,000 national adults (for multiyear results). Results based on these samples have margins of sampling error of less than ±1 percentage point at the 95% confidence level. The findings by political party and racial subgroups are based on smaller sample sizes and have higher associated margins of sampling error.

Results from Gallup's Sept. 1-17, 2021, poll are based on telephone interviews conducted with a random sample of 1,005 adults, aged 18 and older, living in all 50 U.S. states and the District of Columbia. For results based on this sample of national adults, the margin of sampling error is ±4 percentage points at the 95% confidence level.