skip to main content
Politics
U.S. Satisfaction Inching Back Up

WASHINGTON, D.C. -- Americans' satisfaction with the way things are going in the United States is at 28% in July, similar to the 27% in June, but up from 24% in May. The July 10-14 Gallup survey finds that the large majority of Americans, 68%, remain dissatisfied with the way things are going. There has been no clear trend in satisfaction this year, with the percentage satisfied fluctuating between a low of 21% in March and a high of 30% in April.

Americans' average satisfaction thus far for 2013 is 26%, exactly the same as it was in 2012, and well below the historical average of 38% that Gallup has found since it started asking the question in 1979. Democrats have been the most satisfied with the direction of the country since President Barack Obama took office, with their satisfaction peaking at 64% during last fall's presidential campaign. Prior to that, while George W. Bush was president, Republicans' satisfaction routinely was higher than Democrats'. 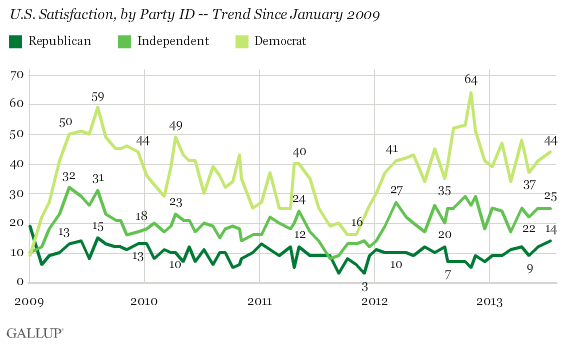 Americans grew slightly more satisfied in June and July with the way things are going in the country. But their satisfaction remains low from a historical perspective, particularly compared with the years prior to the 2008 recession. Americans continue to be down on Congress, and the U.S. has yet to make a robust recovery from the recession, likely contributing to their lingering frustrations with the nation's direction.

Americans remain down on Congress, with 15% approving and 78% disapproving of the job it's doing. Democrats are still slightly more likely than Republicans and independents to approve of Congress.