PRINCETON, NJ -- Still something of a novelty, online education is seen relatively positively by Americans for giving students a wide range of curricula options and for providing good value for the money. However, Americans tend to think it provides less rigorous testing and grading, less qualified instructors, and has less credence with employers compared with traditional, classroom-based education. Public perceptions about online education's ability to deliver education in a format most students can succeed in, as well as its ability to tailor instruction to the individual, are more mixed, but tilt negatively.

In line with these views, Americans' overall assessment of Internet-based college programs is tepid at best. One-third of Americans, 34%, rate such online programs as "excellent" or "good." The majority calls them "only fair" or "poor." In contrast, two-thirds of Americans (68%) rate four-year colleges and universities as excellent or good, and nearly as many (64%) rate community colleges this highly. Education leaders see skyrocketing college tuition, student debt, and uncertain job prospects for many graduates as an untenable situation that could soon accelerate the adoption of online learning as a credible alternative to traditional college programs.

In addition, half of Americans currently believe that obtaining the knowledge and skills needed to perform a specific job are more important for young people today than earning a college degree from a well-respected university. This broadly suggests that online programs offering more targeted curriculum -- distinct from a traditional bachelor's degree -- or even certification in specific skills, could ultimately transform how students approach postsecondary education. Notably, while there are minimal differences by age in perceptions of what the educational priority should be for young people, nonwhites are significantly more likely than whites to believe that obtaining a degree from a well-respected university is more important than becoming prepared for a specific job. The majority of those with postgraduate degrees and Democrats also attach greater importance to respected degrees, while Republicans and Americans with at most an undergraduate degree or less believe obtaining the knowledge and skills needed for work is more important.

Five Percent of Adults, and One in Five Students Are Now Taking an Online Course

Five percent of all national adults saying they are currently taking an online course of any kind, which could include professional development or enrichment courses, as well as formal college classes. However, given the higher rate among young adults, it is likely that the bulk of current enrollees are focused on schoolwork. Eight percent of 18- to 29-year-olds and 5% of those 30- to 49-year-olds are currently enrolled, versus less than 5% of those aged 50 and older. Online courses and degrees offer immense potential for increasing college access, decreasing the cost of education, and providing expanded options for learning. Still, overcoming the public's views on technology could be difficult. For instance, despite lots of media and industry buzz about the personalized nature of online instruction, Americans still view traditional, classroom-based education as better tailored to each individual.

Although online education is in relatively nascent stages of development and acceptance, many Americans already see benefits in the lower cost and diverse coursework it offers. That is powerful. But if leaders in the field want online learning to have equal status with campus-based programs, they need to do more to demonstrate high standards for instruction, testing, and grading. With this, greater public appreciation for the benefits of online learning, and greater employer acceptance of online educational qualifications, will likely follow.

Results from the Oct. 3-6, 2013, Gallup poll are based on telephone interviews with a random sample of 1,028 adults, aged 18 and older, living in all 50 U.S. states and the District of Columbia. For results based on the total sample of national adults, one can say with 95% confidence that the margin of error is ±4 percentage points.

Results from the Oct. 5-6, 2013, Gallup poll are based telephone interviews with a random sample of 1,025 national adults, aged 18+ living in all 50 U.S. states and the District of Columbia. For results based on the total sample of national adults, one can say with 95% confidence that the margin of error is ±4 percentage points. 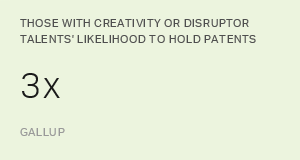