WASHINGTON, D.C. -- Americans' confidence in the U.S. economy appeared to be improving after the partial government shutdown ended Thursday and lawmakers reached an agreement to avoid defaulting on the nation's debt. Gallup's Economic Confidence Index averaged -36 last week, up from -39 the prior week. This marks the first time economic confidence has improved since the week ending Sept. 15, when federal budget and debt ceiling negotiations were intensifying. 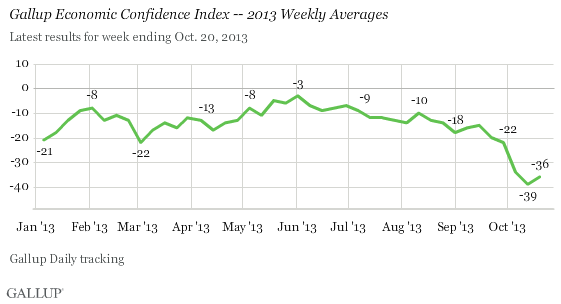 Gallup's three-day rolling averages reveal that most of the improvement happened toward the end of last week after lawmakers reached a deal. The index was -40 for Monday-Wednesday interviewing and -33 for Friday-Sunday interviewing. This signals that Americans' confidence in the economy may rebound relatively quickly, as it did after lawmakers avoided the "fiscal cliff" in late 2012 and after sequestration budget cuts took effect in early March.

Wall Street responded positively after lawmakers reached the deal, which may have boosted Americans' confidence. The S&P 500 ended the week at an all-time high and the Dow finished up on Friday, slightly under its September peak.

Still, from a broader perspective, the Gallup Economic Confidence Index -- which is based on Americans' assessments of current U.S. economic conditions and their perceptions of whether the economy is getting better or worse -- remains entrenched in negative territory. The index is significantly lower than it was in late May and early June of this year, when it peaked at -3.

Last week, 69% of Americans said the economy was getting worse, while 27% said it was getting better. The resulting -42 net economic outlook score is up from -46 the week before.

Since mid-September, Americans' perceptions of the economy's direction have declined more than twice as much as their assessments of current conditions. 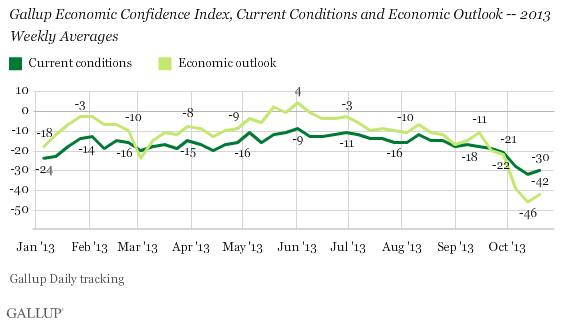 The partial government shutdown and prospect of the nation defaulting on its debts clearly shook Americans' confidence in the economy -- particularly their perceptions about where the economy is headed -- during the past month. However, Gallup's Economic Confidence Index rose three points last week, suggesting that Americans' confidence may be starting to recover. Gallup also found that the shutdown and resulting drop in economic confidence did not appear to pull the plug on Americans' holiday spending plans.

Still, some key factors could stifle Americans' confidence in the economy in the days and weeks ahead. The U.S. Bureau of Labor Statistics is planning Tuesday to release its September labor report, which was delayed because of the shutdown. Gallup's unemployment data suggest that the BLS will likely report no change in the unemployment rate. Additionally, Americans have reported a worse hiring situation at their places of employment so far in October, and higher mortgage rates seem to be affecting the housing market recovery. These factors may play into Americans' evaluations of the economy, but the fiscal agreements reached last week appear to have economic confidence moving in a positive direction.

Results for this Gallup poll are based on telephone interviews conducted Oct. 14-20, 2013, on the Gallup Daily tracking survey, with a random sample of 3,566 adults, aged 18 and older, living in all 50 U.S. states and the District of Columbia.