PRINCETON, NJ -- Parents in Nevada this week faced one of parents' biggest crime fears -- having their child harmed at school -- during a shooting that left two students injured and the gunman and a teacher dead. Prior to that attack, 25% of U.S. parents said they "frequently" worry about their child being harmed at school. Their concern is up from 2009-2011, but in line with what Gallup has measured previously.

These results are from Gallup's annual Crime poll, conducted Oct. 3-6 this year. It is possible that parents' concern about their children being harmed at school is even higher now after news of the Oct. 21 Nevada attack.

The higher parental concern in this year's survey could be a residual effect from last winter's Newtown, Conn., school shootings. Parental fears about children's safety at school increased in the immediate aftermath of those shootings and remained higher in August.

Concern about a school-aged child being harmed at school ranks third among parents' concerns about crime, behind unauthorized use of phone and email records, and identity theft. Apart from their heightened worry about children's safety at school, parents' crime fears are generally similar to those of all Americans. 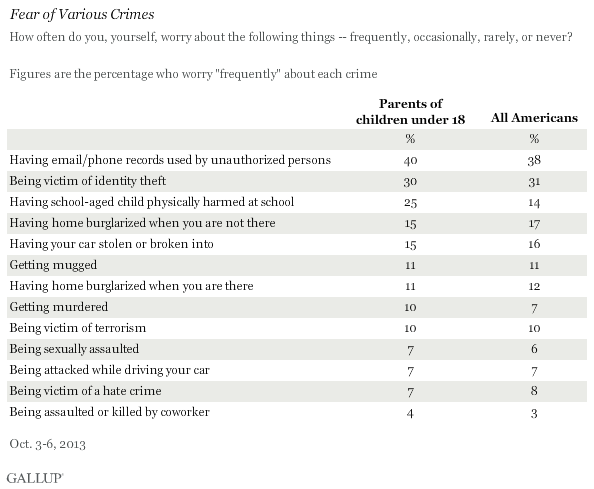 The ranking of Americans' crime fears suggest they worry today more about "digital age" crimes such as identity theft and having unauthorized people view their phone and Web communications, than the types of incidents more traditionally thought of as crimes, including violent acts such as being murdered or sexually assaulted.

This suggests Americans may worry most about crimes they feel they are more vulnerable to than those that may have more severe consequences for their personal safety but may be less likely to happen to them.

Americans' current concerns about various crimes are generally similar to the historical concern averages. The three-point dip in the percentage who are frequently worried about being a victim of terrorism is the biggest difference. 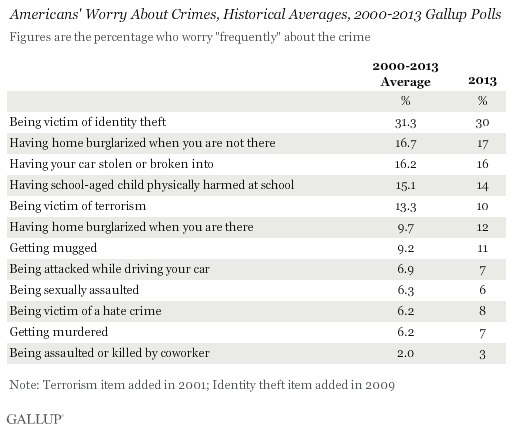 The relative ranking of these fears has been fairly consistent over time. Identity theft, first asked in 2009, was the top concern each year from 2009 to 2011. Nearly twice as many Americans during this period worried frequently about having their identity stolen as worried about any other crime. Unauthorized phone or email use, which Gallup asked about for the first time this year, elicits even more worry than identity theft, with 38% worrying about it frequently.

After identity theft, Americans tend to worry about home burglaries when they are away from home, car theft, and the safety of their children at school.

Americans are least worried about being attacked at work by a fellow employee. They generally worry less about being murdered, being the victim of a hate crime, being sexually assaulted, and being attacked while driving than about other crimes.

Crime is an unfortunate but real part of advanced society. And it seems that as society continues to advance, the types of crimes Americans worry about evolve, too. Now, Americans worry more about their personal privacy being violated online or elsewhere than about crimes that affect their personal safety. That suggests Americans' crime fears are driven by their perceived likelihood of being a victim as much as a crime's physical or material effects.

The reports of school shootings over the past 15 years have helped push concern about such shootings nearly to the top of U.S. parents' crime concerns. Though school shootings are still rare compared with other types of crimes, perhaps it is because children are so physically vulnerable to an attack that makes their safety at school a special concern to parents.