PRINCETON, NJ -- Uninsured Americans are increasingly conscious of the "Obamacare" requirement that most Americans need to carry insurance or pay a fine. Eighty percent of uninsured Americans now say they are aware the healthcare law requires this, up from 73% earlier this month and 56% this summer. 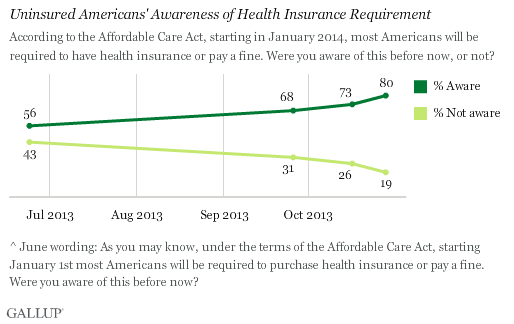 The latest results are based on Oct. 18-29 Gallup Daily tracking of uninsured Americans' knowledge and awareness of the 2010 Affordable Care Act and its provisions, as the law is more fully implemented in the coming months.

In order for health insurance to remain affordable for Americans under the Affordable Care Act, as many Americans as possible need to carry insurance, particularly those who are healthy and least likely to use the healthcare system. That is one reason the government included the requirement, or "individual mandate," in the legislation.

One key in reaching the goal of universal coverage is making uninsured Americans aware that they need to get insurance. Clearly there has been significant progress toward that goal in recent months. Gallup will continue to track awareness of the health insurance requirement to see whether it continues to rise.

Most Uninsured Plan to Get Insurance

After Americans are aware of the insurance requirement, the next major step is to get them to sign up for health insurance. Gallup has consistently found most uninsured Americans saying they plan to get insurance rather than pay the fine that would be levied on those without insurance. The percentages have fluctuated a bit since Gallup began tracking them; currently, 67% intend to get insurance and 25% plan to pay the fine. 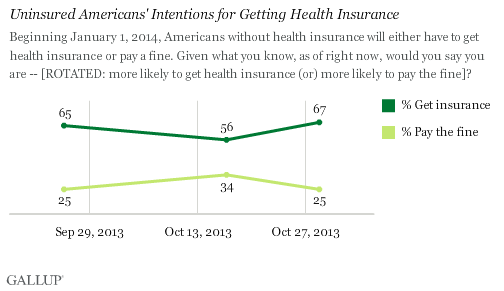 If those who plan to pay the fine indeed follow through on their intentions, and everyone else gets insurance, that would still leave about 5% of Americans without health insurance, given that 18% of all Americans are currently uninsured.

No Increase in Familiarity With Health Insurance Exchanges 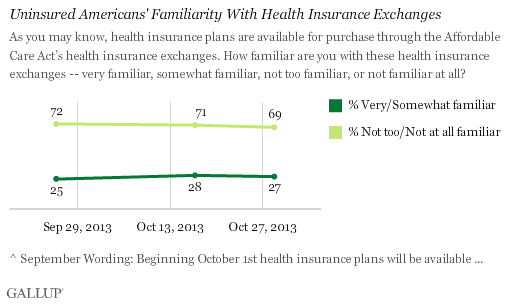 The exchange website's technical issues have been major news since the exchanges opened. It is not clear whether those problems are contributing to the lack of familiarity, which could be the case if people have attempted to access the website but have been unable to. The relative lack of familiarity with the exchanges also could be attributable to people waiting until closer to the deadline to get insurance. It may also be related to the fact that less than half of the uninsured who plan to get insurance, 44%, say they will get it from an exchange. Another 35% say they will get insurance elsewhere, and the remainder are unsure of whether they will purchase from an exchange.

One would expect the uninsured to be more positive toward the law because they are its primary beneficiaries, with the government now providing them new and presumably more affordable insurance options. Still, the fact that less than half approve can hardly be considered a strong endorsement of the law. It could be that many uninsured Americans do not like some of the law's specifics, particularly the requirement that they carry health insurance. Younger and healthier Americans especially may not see health insurance as worth the financial investment, even if the law gives them a greater range of options than before.

The relatively tepid evaluation of the law among the uninsured is not attributable to their political leanings -- which are strongly predictive of support for the law. The uninsured are a lot more likely to identify or lean Democratic (47%) than Republican (27%).

In June, Gallup found 54% of uninsured Americans approving and 39% disapproving of the healthcare law. Although it appears that the uninsured are less positive toward the law now than in June, it is not certain that is the case, because the difference between the two polls' results are not statistically meaningful.

Awareness of the healthcare law's insurance requirement is steadily increasing, marking significant progress on a basic goal toward making the Affordable Care Act work. Still, a nontrivial 19% of uninsured Americans remain unaware that they need to get health insurance or be subject to a fine.

Awareness is just the first step in realizing the law's goals; those who do not have insurance still need to get it. The majority of the uninsured say they do plan to get insurance, but again, the percentage is far short of the ideal goal of universal coverage.

Results for this Gallup poll are based on telephone interviews conducted Oct. 18-29, 2013, on the Gallup Daily tracking survey, with a random sample of 730 uninsured adults, aged 18 and older, living in all 50 U.S. states and the District of Columbia.

For results based on the total sample of uninsured adults, one can say with 95% confidence that the margin of sampling error is ±5 percentage points.

Results for the ACA approval item are based on interviews with 373 uninsured Americans conducted Oct. 18-20 and Oct. 26-28. For results based on this sample, the margin of sampling error is ±6 percentage points.

More U.S. adults were uninsured in the third quarter of 2013 than in any quarter since Gallup began tracking in 2008, with 18% reporting they lacked health insurance. Uninsured rates for both 18- to 25-year-olds and 26- to 64-year-olds increased.