WASHINGTON, D.C. -- After headlines have often trumpeted news of a continuing federal budget deficit, persistently high unemployment, and a slow-to-recover housing market in the U.S. in recent years, the prevailing wisdom might be that these developments are affecting Americans' satisfaction with their lives. Yet Americans report high levels of satisfaction with many aspects of life, from housing to standard of living to the opportunities they have to succeed, and are even more satisfied with their safety and leisure time than they were in the economic boom of the late 1990s. Americans have, however, become less satisfied with their future and their finances over the past 15 years. 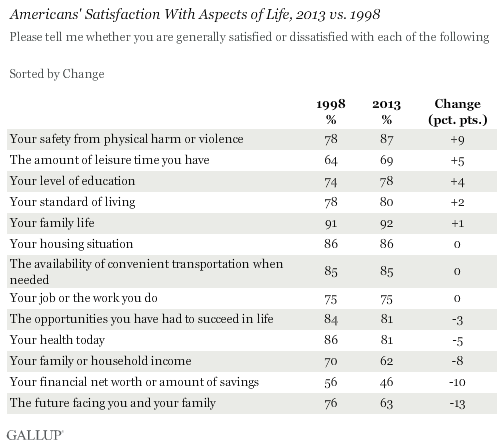 These most recent results are from a Sept. 21-24 poll in which Gallup asked Americans about 13 areas of their lives. Gallup asked the same questions in 1998, which coincided with a period of general economic prosperity in the United States.

Financial net worth, at 46% satisfied, is the only aspect with which fewer than six in 10 Americans express satisfaction. In only a handful of major subgroups do a majority say they are satisfied with their net worth, including Democrats (52%), those aged 65 and older (62%), those making at least $60,000 a year (59%), and college graduates (59%).

Americans' relatively high satisfaction in 2013 compared with 1998 is notable because of the differing economic situations in these years. In 1998, unemployment was in the 4% range, while it is in the 7% range in 2013. The United States was also operating with a budget surplus in fiscal year 1998, but now has one of the largest deficits in its history. Americans' lower levels of satisfaction with their income, net worth, and future may be attributable, in part, to the tougher economic situation in 2013.

Despite a slow recovery from the 2008-2009 economic recession, Americans' general level of satisfaction with various aspects of their lives remains high. Satisfaction with one's future prospects, household income, and financial net worth have declined, yet in Gallup trends dating back as far as the 1960s, satisfaction in these three areas was at or near record highs in 1998. This suggests that the booming economy of 15 years ago may have been a factor in Americans' satisfaction with these economic aspects of life.

This may mean that in individual families and communities, satisfaction in certain areas remains strong despite political or economic turbulence. Additionally, various aspects of the American experience -- such as family, transportation, and education -- may be impervious to fluctuations in economic, political, or social factors.

Results for this Gallup poll are based on telephone interviews conducted Sept. 21-24, 2013, on the Gallup Daily tracking survey, with a random sample of 2,031 adults, aged 18 and older, living in all 50 U.S. states and the District of Columbia.