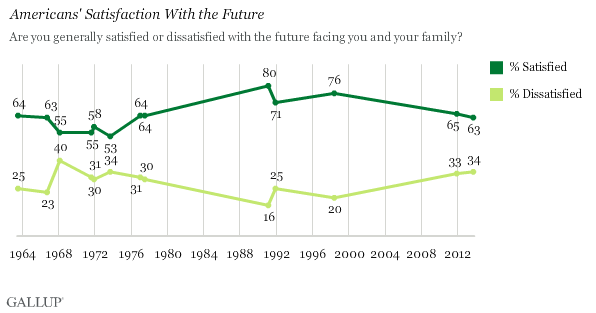 The 63% of Americans who today are satisfied with the future facing them and their families, based on Sept. 21-24 polling, is just one percentage point lower than Gallup found when it asked the same question for the first time, in July 1963. Americans were most likely to be satisfied (80%) near the end of the first Gulf War, in February 1991. Through the rest of the 1990s, Americans' satisfaction remained in the 70% range, before falling to 65% in 2011 amid a slow recovery from the recession. Gallup did not ask this question in the first decade of the new century.

Americans were feeling least optimistic about the future in the late 1960s and early 1970s, culminating in the September 1973 reading (53% satisfied) -- as the U.S. stock market was in the middle of a steep decline, inflation was heating up, and the White House was embroiled in the Watergate scandal. After that low point, satisfaction rose in the late 1970s to levels similar to those seen in 2013.

Americans are as satisfied now with their present family or household income as they were 50 years ago. Today, 62% say they are satisfied, and in 1963, 64% felt the same way. The current reading marks a decline from the high of 70% in 1998, during a strong economy largely fueled by the dot-com boom. Americans were least likely to be satisfied with their household income (58%) in December 1984, as the U.S. was entering a great expansion in GDP that would last about 25 years. By 1988, satisfaction with family income had risen to 69%. 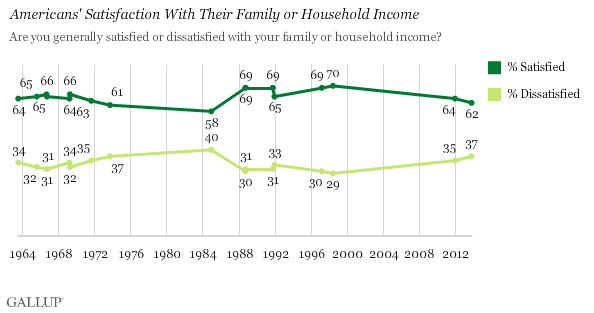 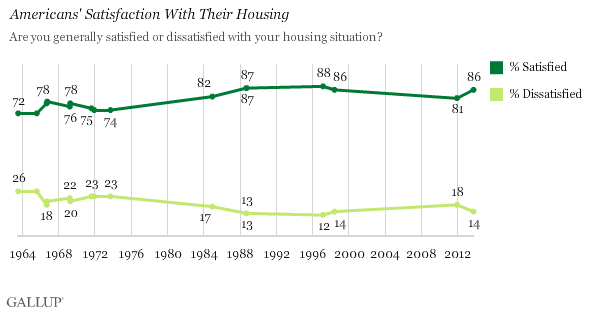 Americans' satisfaction in three key areas -- their future prospects, their family or household income, and their housing -- have varied over time. In the first two of these, Americans' satisfaction levels after a relatively brief spike have returned to where they were in 1963, a much different time in the U.S. The drop in these areas from their peaks in the 1980s and 1990s suggests that after a period of record economic prosperity in the U.S., Americans' feelings are now more aligned with a time before this mammoth economic expansion. Perhaps, to paraphrase what Alan Greenspan once said, the age of "irrational exuberance" is indeed over.

Housing, however, is a different story. A likely interpretation of the question about "your housing situation" is "the house you live in now," meaning Americans' satisfaction with the rooms in their house, the furnishings, yard, and so on. It may be less likely that Americans are responding based on the value of their house, which has likely varied a lot in the last 20 years, especially after the housing bubble burst in the late 2000s. But also, home values, even if they are fluctuating, really become relevant only if an owner is looking to sell his or her home. Americans' satisfaction with their housing, consistently more than 80% since 1984, has proved remarkably resilient.

Results for this Gallup poll are based on telephone interviews conducted Sept. 21-24, 2013, on the Gallup Daily tracking survey, with a random sample of 2,031 adults, aged 18 and older, living in all 50 U.S. states and the District of Columbia.