WASHINGTON, D.C. -- With momentum building at the federal and state level to increase hourly base pay, more than three-quarters of Americans (76%) say they would vote for raising the minimum wage to $9 per hour (it is currently $7.25) in a hypothetical national referendum, a five-percentage-point increase since March. About one-fifth (22%) would vote against this.

Voters in New Jersey amended the state constitution last week to raise the minimum wage $1 to $8.25, by 61% to 39%. Yet a Gallup poll conducted Nov. 5-6 shows that an even greater percentage of Americans would vote for an even higher minimum wage. Of course, Congress, rather than the people via a national vote, holds the actual authority to raise the minimum wage. Despite President Barack Obama's State of the Union call to raise the wage to $9 -- and widespread rallies populated mainly by hourly fast-food workers -- legislation that would accomplish this goal has thus far languished. More recently, the Obama administration has voiced support for the Harkin-Miller bill, which would raise the minimum wage even higher -- to $10.10.

A law that would raise the minimum wage to $9 an hour with automatic increases tied to the inflation rate is only slightly less popular, with 69% saying they would vote for it, and 28% against it. The amendment New Jersey voters passed does link the wage to inflation, but many legislative bills have not done that.

The federal minimum wage is currently not adjusted for inflation and its real, inflation-adjusted, value has varied significantly since the wage was established in 1938. Interestingly, even as the nominal rate of the minimum wage has increased by 2800% from its original value of 25 cents per hour, the real value of the wage has declined from its 1968 peak by 33%. 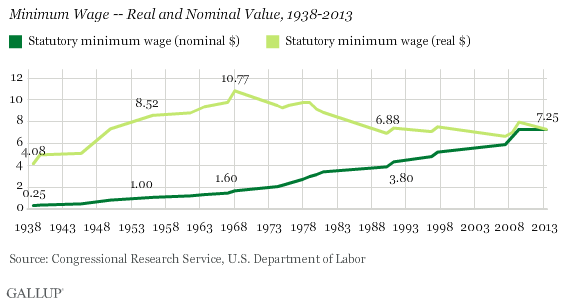 Republicans are the least supportive of hiking the minimum wage to $9 but not tethering it to inflation, with 58% saying they would vote in favor and 39% against it. By comparison, 91% of Democrats and 76% of independents would favor it. Republicans in Congress would appear to agree with rank-and-file Republicans, in that the U.S. House of Representatives in March voted down a proposal to raise the minimum wage to $10.10 by 2015, with all Republicans voting against it. 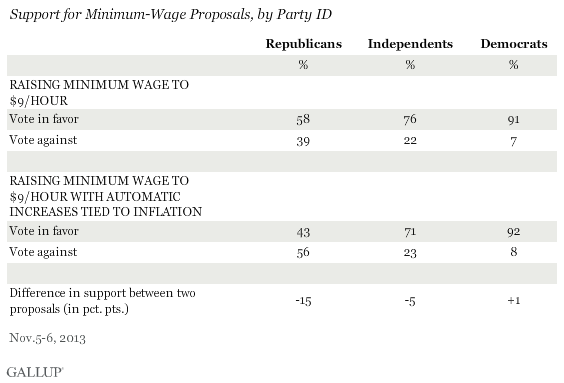 Tying the minimum wage to inflation, however, sparks stronger resistance from Republicans, with an outright majority (56%) voting down the hypothetical proposal and 43% voting for it. Independents are slightly less amenable to the measure, with 71% saying they would vote for it, while Democrats' views are essentially the same.

As Democratic leaders in the U.S. Senate are poised to introduce legislation raising the federal minimum wage, doing so remains a popular proposition with Americans. Support for the proposal has increased since earlier this year, and now reaches majority levels across all three major political identifications.

Linking automatic minimum-wage increases to inflation is only slightly less popular. The real value of the wage has generally declined since 1968, and it appears most adults would support measures to counteract this trend. Yet, behind the large majority support lurks a potential partisan battle if any legislative proposal were to incorporate this element, because the majority of Republicans oppose this measure.

Results for this Gallup poll are based on telephone interviews conducted Nov. 5-6, 2013, on the Gallup Daily tracking survey, with a random sample of 1,040 adults, aged 18 and older, living in all 50 U.S. states and the District of Columbia.