WASHINGTON, D.C. -- Americans' confidence in the economy is slowly increasing nearly four weeks after U.S. lawmakers reached a debt ceiling agreement that ended the government shutdown. Gallup's Economic Confidence Index rose two points to -27 last week, and has significantly improved from the low of -39 during the mid-October shutdown. Still, the index is well below the -15 measured in mid-September before confidence deteriorated. 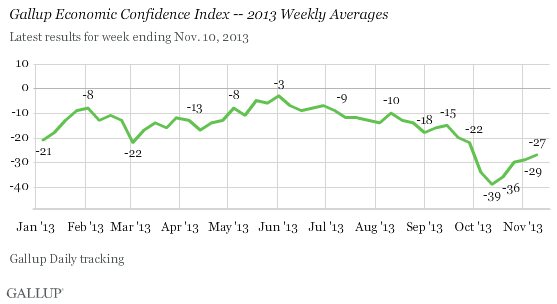 Gallup's three-day rolling averages reveal that most of the improvement happened toward the end of last week. The index was -31 for Monday-Wednesday interviewing and -23 for Friday-Sunday interviewing. This suggests that record-high U.S. stock market prices and the Bureau of Labor Statistics report of better-than-expected job gains in October may have boosted Americans' confidence. Increasing confidence also indicates that the well-publicized technical problems plaguing the federal health exchange website have not affected Americans' views of the economy.

Americans' confidence appears to be recovering more slowly than it did after other recent instances of partisan brinkmanship, such as the fiscal cliff debate at the end of last year and the sequestration debate in early March. However, confidence did not drop as sharply then as it did during the shutdown. On the other hand, economic confidence took about five months to recover after the 2011 debt ceiling crisis, likely related to the subsequent downgrading of the U.S. credit rating and plummeting stock prices, set against the backdrop of a generally weaker economy at that time.

Gallup's Economic Confidence Index is based on two components: Americans' assessments of current economic conditions in the U.S. and their perceptions of whether the economy is getting better or worse. Americans' perceptions of the economy's direction worsened more during the shutdown than their views of the current economic situation. Now that the shutdown has ended, the recovery in confidence is occurring as a reverse mirror image of the decline, with the outlook component improving more than ratings of current conditions.

Last week, 62% of Americans said the economy was getting worse, while 34% said it was getting better. The resulting -28 net economic outlook score is up from -31 the week before and has significantly improved from -46 in mid-October during the shutdown. Still, Americans' economic outlook is much worse than it was in mid-September.

Fourteen percent of Americans last week said the economy is excellent or good, while 39% said it is poor. The net current conditions score of -25 is up slightly from -27 the week before, but still trails the -18 found in mid-September. 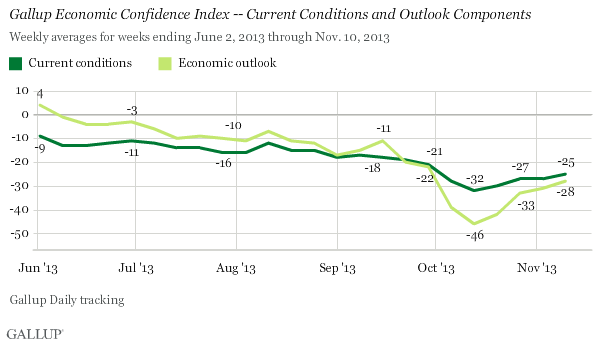 Americans' confidence in the economy improved for the fourth straight week since the partial U.S. government shutdown ended. The uptick in the index last week may have also been attributable to the BLS jobs report for October that exceeded many economists' expectations and record-high stock prices, because the improvement in the weekly average was driven by more positive numbers toward the end of the week. Furthermore, lower gas prices and rising home values also may be boosting Americans' fragile confidence in the economy.

Still, confidence remains entrenched in negative territory heading into the holiday season and is far below its mid-September levels.

Results for this Gallup poll are based on telephone interviews conducted Nov. 4-10, 2013, on the Gallup Daily tracking survey, with a random sample of 3,567 adults, aged 18 and older, living in all 50 U.S. states and the District of Columbia.