skip to main content
Politics
U.S. Satisfaction Back Up to 20%

PRINCETON, NJ -- Twenty percent of Americans are satisfied with the way things are going in the United States, a partial recovery from 16% in October during the government shutdown. The current reading is still one of the lowest Gallup has measured in the last two years. 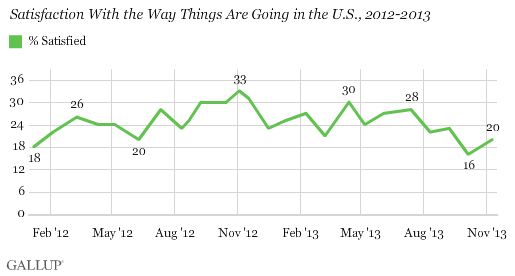 Many core Gallup tracking measures became more negative during the shutdown. Some, including satisfaction and economic confidence, have begun to recover since it ended. Others, including congressional job approval and presidential job approval, remain lower.

There is a significant party gap in satisfaction, with 31% of Democrats satisfied, compared with 20% of independents and 6% of Republicans. Democrats and independents show higher satisfaction levels than in October, though both are still below where they were at other points this year. Republicans' current level of satisfaction is the lowest for them since last November, when it was 5%. 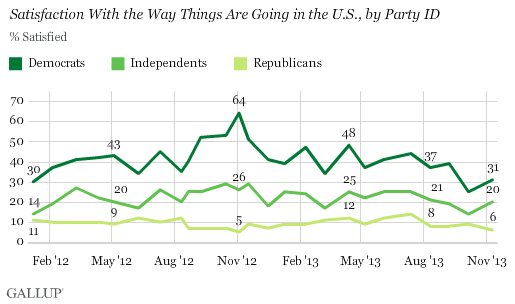 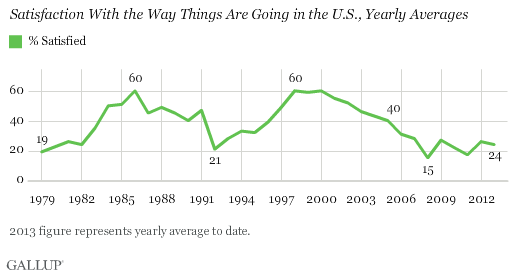 Americans are not in quite as foul a mood as they were in October, or at other times in the past several years. However, the 20% who are currently satisfied with the way things are going in the United States is well below the historical average.

Certainly a good deal of the explanation for the lower satisfaction levels is tied to the economy. Americans are still more pessimistic than optimistic about the economy, though not nearly as pessimistic as they were during much of 2008-2011.

In addition to the economy, the gridlocked nature of the federal government may also contribute to Americans' relatively low satisfaction. Increasing numbers mention dissatisfaction with government as the most important problem facing the nation, with it topping the list the last two months, including this month after the shutdown ended. Finally, concerns over healthcare and the healthcare law, the second-most-frequently mentioned problem, may also be affecting Americans' satisfaction levels.

One Year After Sandy, Depression Drops in Areas Hardest Hit

Americans living in the areas most directly affected by Superstorm Sandy report a return to pre-storm levels in depression and worry one year after the storm.