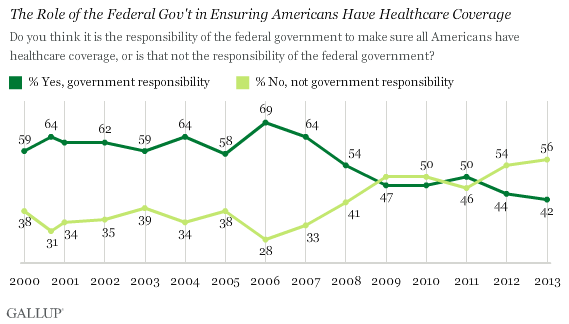 The most recent data were collected in Gallup's annual Health and Healthcare poll, conducted Nov. 7-10. The percentage of U.S. adults who said it is the federal government's responsibility to ensure all Americans have healthcare coverage peaked at 69% in 2006. Attitudes began to shift significantly in 2007, and continued to change through the time President Barack Obama took office in 2009. Americans who feel healthcare coverage is not the federal government's responsibility have been in the clear majority the past two years.

Attitudes across all three partisan groups have shifted away from the view that ensuring healthcare coverage is a proper role of government, but most significantly among Republicans and independents. In September 2000, 53% of Republicans believed the government should not be responsible for ensuring all Americans had health coverage; today, 86% feel that way, an increase of 33 percentage points in 13 years. Over the same period, the percentage of Republicans believing the government should ensure healthcare coverage for all has fallen from 42% to 12%.

Fifty-five percent of independents currently say the government should not be involved with healthcare -- an increase of 28 points since 2000.

The percentage of Democrats who hold this view is now 30%, its highest level since Gallup first asked the question and an 11-point increase since 2000 -- with the largest change in opinion occurring between 2006 and 2008. 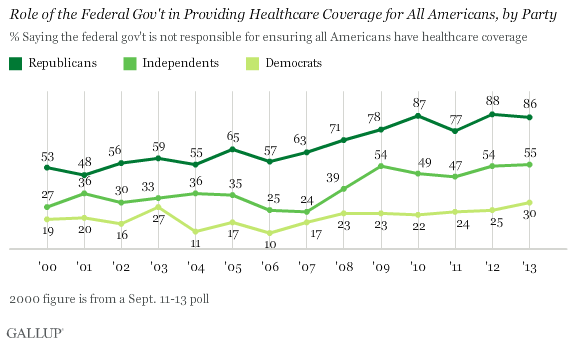 Americans' attitudes toward the government's role in ensuring all Americans have access to affordable healthcare have changed substantially over the past decade. These changes began before the Affordable Care Act was passed in 2010, and concurrently with the financial crisis of 2008 and Obama's first presidential campaign and election. Although Democrats are now somewhat more likely compared with 2000 to say the government should stay away from healthcare, much of the shift in attitudes against government intervention has stemmed from changes among Republicans and independents. It is possible that this sharp change has been caused by a politicization of the issue as it became a major part of Obama's campaign platform, and as he and other Democratic leaders pressed for and passed the ACA, sometimes called "Obamacare," in 2010.

The continuing implementation of the ACA over the coming months and years will surely continue to shape Americans' attitudes toward the federal government's role in this area. It is not clear how the ACA's troubled rollout to date will affect attitudes over the next year. But as the debate about the implementation of the new healthcare law has unfolded, Americans have become less likely than ever to agree that the federal government should be responsible for making sure that all Americans have healthcare.

Results for this Gallup poll are based on telephone interviews conducted Nov. 7-10, 2013, on the annual Gallup Health & Healthcare poll, with a random sample of 1,039 adults, aged 18 and older, living in all 50 U.S. states and the District of Columbia.

For results based on the total sample of 1,039 national adults, one can say with 95% confidence that the margin of sampling error is ±4 percentage points.

For results based on the total sample of 272 Republicans, one can say with 95% confidence that the margin of sampling error is ±6 percentage points.

For results based on the total sample of 449 independents, one can say with 95% confidence that the margin of sampling error is ±5 percentage points.

For results based on the total sample of 292 Democrats, one can say with 95% confidence that the margin of sampling error is ±6 percentage points.

As problems with the federal health exchange website persist, 19% of Americans mention healthcare as the most important problem in the U.S., up from 12% in October. Americans still rank dysfunctional government as the top problem.

Americans' familiarity with the healthcare law and their assessments of its future impact are little changed since August. Their views of the law's impact remain more negative than positive.