WASHINGTON, D.C. -- The percentage of Americans mentioning healthcare as the country's most important problem increased to 19% in November from 12% in October, as technical issues with the federal health insurance website continue and the White House faces criticism over people being dropped from their health plans. Healthcare now ranks second behind dissatisfaction with government as the top problem, but ahead of the economy in general, unemployment, and the federal debt. 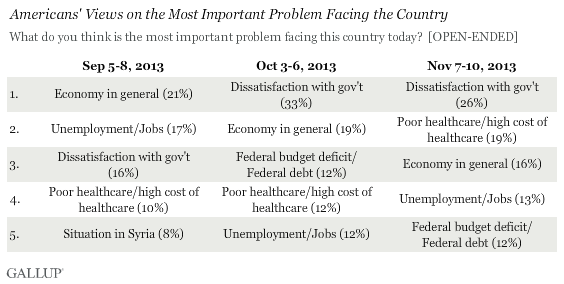 Mentions of poor healthcare or the high cost of healthcare as a top problem in the Nov. 7-10 survey have nearly doubled since September and are higher now than in any month since the Affordable Care Act become law in March 2010. This suggests that recent troubles with the federal health exchange website and other problems with the healthcare law's rollout, including accusations that President Barack Obama misled Americans about keeping their current coverage, may be fueling public concern.

The 26% of Americans who mention dissatisfaction with government as the top problem this month is down slightly from a record high of 33% in October. The still-high level of frustration with government is consistent with record-low congressional approval in November and the president's job approval rating hovering near his personal low.

This month marks the first time since 2007 that non-economic issues have occupied the top two spots on Americans' list of most important problems. Fewer Americans have been mentioning the economy in general or unemployment specifically this year, possibly reflecting their increasing confidence in the economy.