WASHINGTON, D.C. -- After two months of glitches with the new federal healthcare website and attempts to fix it, the percentage of Americans who prefer that Congress scale back or entirely repeal the Affordable Care Act (ACA), or "Obamacare," has changed little. Fifty-two percent favor scaling back (20%) or repealing (32%) the law, similar to the 50% from mid-October. 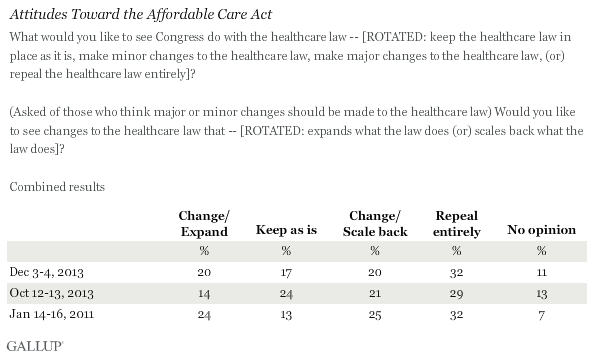 At least half of Americans have said they would repeal or scale back the law each time Gallup has asked this question since January 2011.

The latest results are from a Gallup poll conducted Dec. 3-4, after a tumultuous two months for the Obama administration's healthcare website. Technical issues hamstrung potential buyers from purchasing health insurance through the website.

The Department of Health and Human Services announced on Dec. 1 that the federal health exchange website now works for the "vast majority" of users, though it is too early to determine whether this announcement has affected public opinion of the law.

Americans are about as likely to say they would like Congress to "expand" the healthcare law or "keep it as it is" as they were in October, although a minority hold these views. Twenty percent want Congress to expand the law, up from 14% in October, while 17% want the law to be kept as is, down from 24%.

Overall, 37% of Americans want the law expanded or kept as is, while 52% want the law repealed or scaled back, roughly similar to the 40% who approve and 54% who disapprove in the latest update on overall attitudes toward the ACA. The fact that 32% want an outright repeal, compared with 54% who disapprove of the law, suggests that some of those who disapprove still do not want to do away with the law altogether.

Nearly four years after "Obamacare" was passed, Republicans and Democrats are still deeply divided about whether Congress should modify it. Republicans are more likely to say they want to repeal the healthcare law today (68%) than they were in October (57%). In contrast, Democrats are more likely to want Congress to expand the law (34%) than they were in October (22%). 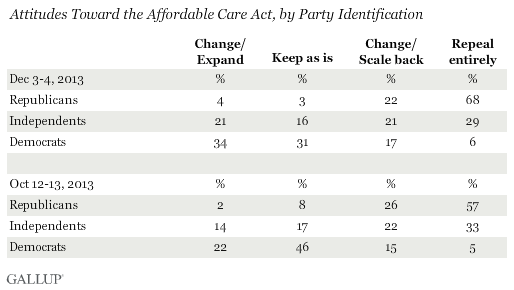 The time since the federal health exchange website officially launched on Oct. 1 has been a period of turmoil for the ACA, with reports of many Americans struggling to successfully sign up for insurance. Despite HHS's announcement on Dec. 1 that the technical issues have been mostly fixed and reports of 29,000 new enrollees in the days thereafter, Americans so far are no less likely to say Congress should repeal the law or scale it back.

As the Obama administration continues to make fixes to the site and the Dec. 23 deadline approaches to enroll for coverage that starts on Jan. 1, Americans' views about congressional action on the healthcare law have remained steady, and it is unclear whether they will budge in the months to come.

Results for this Gallup poll are based on telephone interviews conducted Dec. 3-4, 2013, on the Gallup Daily tracking survey, with a random sample of 1,017 adults, aged 18 and older, living in all 50 U.S. states and the District of Columbia.