PRINCETON, NJ -- As the Obama administration rolls out some of the more significant provisions of the 2010 healthcare law, the vast majority of Americans, 69%, say the law, so far, has not had an effect on them and their family, similar to what Gallup measured more than a year ago. More Americans say the law has hurt (19%) rather than helped (9%) their family, a slightly larger gap than was found last year. 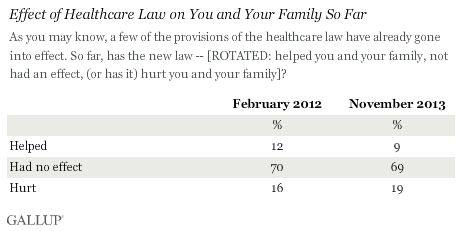 Two major provisions of the healthcare law went into effect in 2010. One allows adult children to stay on their parents' policies until age 26. The other makes it illegal for insurance companies to deny coverage to individuals with pre-existing conditions. Next year, Americans will be required to have insurance that meets minimum coverage requirements or pay a fine. As insurers prepare for that change, they have sent letters to millions of Americans in recent weeks, informing them that their insurance plans are being canceled.

In the Nov. 23-24 Gallup poll, at least six in 10 Americans in most major subgroups say the healthcare law, formally known as the Affordable Care Act, has had no effect on their own situation. That includes 70% of those currently without health insurance, one group the law is specifically designed to help, although the requirement that most Americans get insurance doesn't take effect until next year. Gallup's tracking has found that a small percentage of the uninsured, 3%, have already obtained insurance for next year.

Furthermore, in nearly all subgroups, those who say the law has affected them to this point are more likely to say that it has hurt rather than helped their family. A few groups, including Democrats and liberals, say the law has done more to help than hurt their family to date. Because these groups are among the most supportive of both President Barack Obama and his signature law, it suggests people's views of the how the law has affected them may be influenced by their political leanings, in addition to the law's real-world impact on their own situation.

More Expect Pain Than Relief From Law in the Long Run 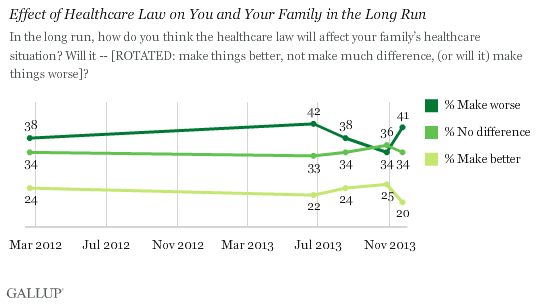 Again, most subgroups expect the law to make things worse rather than better for themselves in the long run. Democrats, liberals, and nonwhites are exceptions.

These results, too, have been fairly consistent over time, with each percentage staying within a four-point range since June. 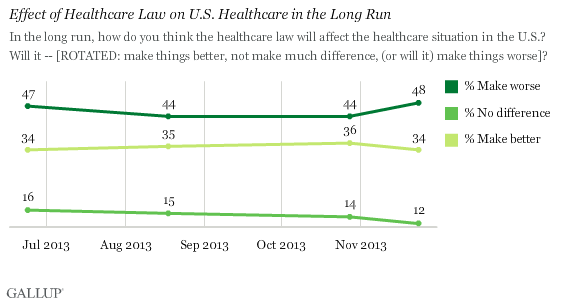 Americans Continue to Disapprove of the Healthcare Law

Approval of the law has remained steady since Gallup's early November update -- 40% approve and 54% disapprove. Throughout this year, more Americans have disapproved than approved of the law, but they have become more negative toward it in recent weeks. 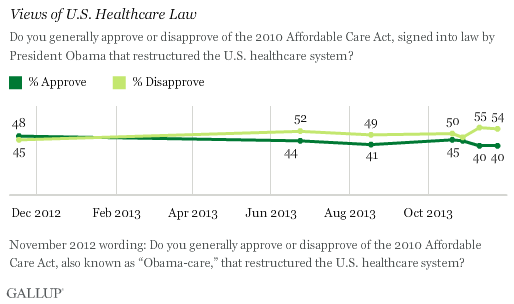 The shift may coincide with reports that millions of Americans were sent cancellation notices for their policies for next year, presumably because the policies did not meet the requirements of the Affordable Care Act. Those cancellations came despite the president's frequent assurances that, under the law, Americans could keep their plans if they liked them.

The latest update comes after the president's Nov. 14 announcement that, through an administrative rules change, those whose policies have been canceled can keep them for another year if their insurers agree to reinstate the policy. However, that action does not appear to have changed Americans' views of the law to any extent.

Gallup's latest update on Americans' views of the healthcare law makes two things clear. First, the law has not to this point directly touched most Americans or affected their health insurance status in any way. Second, despite that fact, they generally do not view the law positively.

Approval of the law in two separate surveys this month has been the worst Gallup has measured to date, and Americans predict the law is more likely to hurt than help their own healthcare situation and the situation in the country as a whole. Americans have long expected the law to do more harm than good, even at times when they were more approving of the law in general, and well before the recent problems with the rollout of key parts of the law this fall.

As the law is more fully implemented next year, and more Americans get health insurance and get government help in paying for it, opinions could move in a more positive direction. But public opinion on the law itself has been generally stable for the last several years, so a more positive future evaluation of it is far from a safe diagnosis.

Results for this Gallup poll are based on telephone interviews conducted Nov. 23-24, 2013, with a random sample of 1,034 adults, aged 18 and older, living in all 50 U.S. states and the District of Columbia.