PRINCETON, NJ -- Amid the extensive publicity about the health insurance exchange websites that are an integral part of the new healthcare law, uninsured Americans' awareness that most Americans are required to get insurance or pay a fine has leveled off after climbing for several months. Seventy-seven percent of those who don't have insurance and have not yet signed up for it for 2014 say they are aware of this requirement, roughly the same as in the past few weeks. 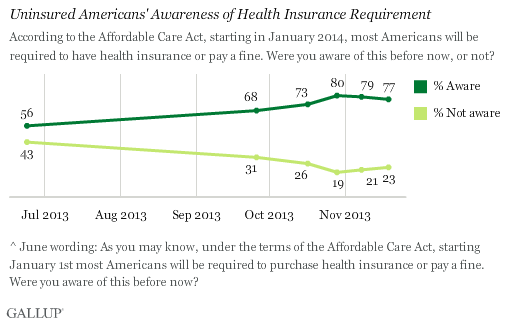 These results are based on Gallup Daily tracking of uninsured Americans' knowledge and awareness of the 2010 Affordable Care Act and its provisions. The need for the uninsured to obtain insurance is a key component of the Affordable Care Act because the program needs premiums from healthier young people to support it. The leveling off of awareness of these requirements in recent weeks could reflect that the publicity surrounding the failed rollout of the federal health insurance exchange website has distracted the uninsured from the core of the program, or lessened their interest in finding out more about it.

The percentage of the uninsured who say they will buy insurance rather than pay a fine dropped slightly in mid-November. Between Nov. 9 and Nov. 19, 62% of those who are uninsured and have not purchased insurance for 2014 said they will get health insurance, down from 67% in the last part of October. This percentage has fluctuated since Gallup began tracking it in late September, and from a big-picture perspective, it does not show a pattern of major increase or decrease. 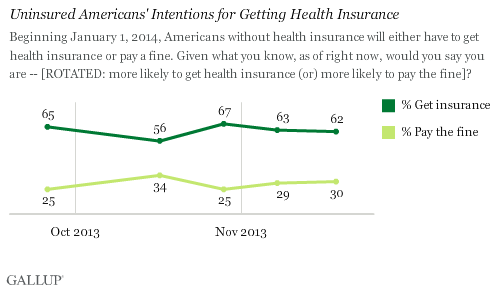 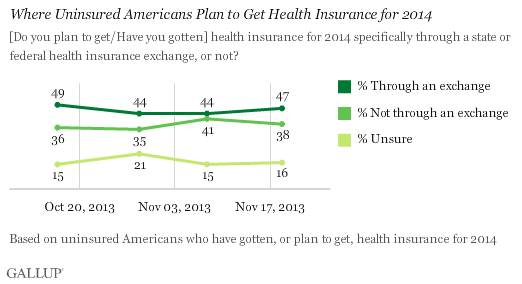 About one-third of those who are currently uninsured are familiar with the health insurance exchanges, which is slightly higher than in late September when Gallup began tracking this measure. It's possible that the news focus on the problems with the exchanges could account for the slight rise in familiarity. But the majority of those who don't have insurance continue to say they are not too or not at all familiar with the exchanges. 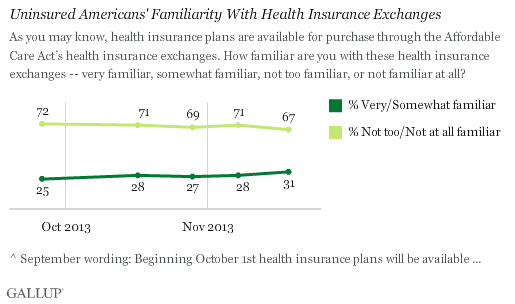 Uninsured Americans' awareness of the ACA's requirements has leveled off in November, coinciding with major problems with the exchanges that are widely interpreted as a setback for the new law. The uninsured remain no more likely now than in the previous two months to say they will get insurance rather than pay the fine. Gallup will continue to track these measures between now and the end of the year.

Results for this Gallup poll are based on telephone interviews conducted Nov. 9-19, 2013, on the Gallup Daily tracking survey, with a random sample of 666 adults, aged 18 and older, who currently do not have health insurance, living in all 50 U.S. states and the District of Columbia. For results based on the total sample of uninsured adults, one can say with 95% confidence that the margin of error is ±5 percentage points.

Uninsured Americans are increasingly aware of the requirement to have insurance, up to 80% from 56% this summer. However, there has been no increase in their familiarity with the insurance exchanges since they opened.