WASHINGTON, D.C. -- Nearly one-quarter of Americans (23%) say cost is the most urgent health problem facing the U.S. today, a four-percentage-point increase since last year that has allowed it to surpass access as the most pressing issue. Americans named access as the top problem from 2007-2012. 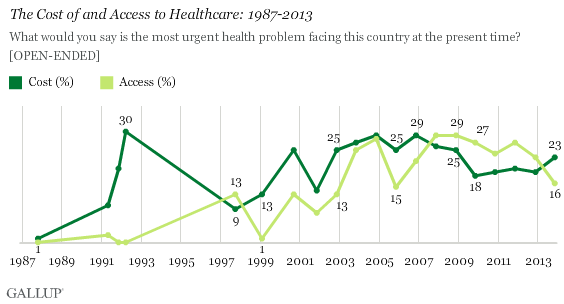 These findings from a Nov. 7-10 Gallup poll come at a particularly trying time for President Barack Obama's signature legislative achievement, the Affordable Care Act. In addition to the malfunctioning federal health insurance exchange website, many Americans have been notified that their current insurance policies will be canceled because they don't comply with the law's new standards. Though Obama has offered a temporary reprieve for these policies, it is not clear how this will work, and some individuals may ultimately have to consider policies with higher premiums.

Despite this scrutiny, the share of Americans citing cost as the nation's top health problem is not inordinately high compared with previous years, though it has increased slightly from the average reading observed throughout Obama's presidency. Fewer Americans now see access as the foremost health dilemma (16%) than in any year since 2005. This year's figure represents a 13-point decline from 2007 and 2008, when nearly three in 10 Americans named access as the nation's main health concern.

Among actual health ailments, obesity ranks first, with 13% naming it. This figure is in line with last year, when an unprecedented 16% saw obesity as the main culprit bedeviling the nation's health. Simultaneously, cancer, the second-leading cause of death in America, has fallen to fourth place on the list. Two percent mention heart disease, the nation's leading cause of death. 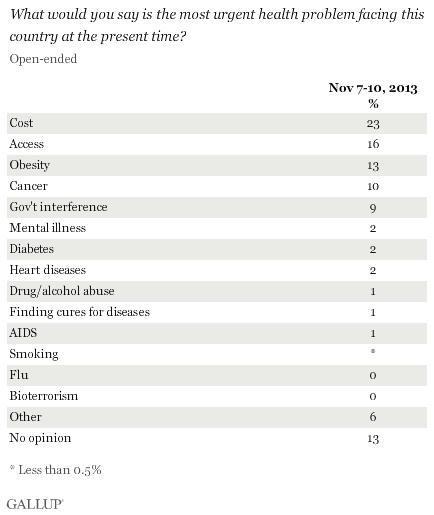 The percentage of Americans naming "government interference" as the top problem has increased the most this year vs. 2012 -- now at 9%, compared with 2% last year. That nearly matches the 10% who named government interference in November 2010, the first update of the question after the healthcare law was passed.

Other health threats that have attracted considerable mention in the past, such as the flu and bioterrorism, failed to register at all in 2013. Although the percentage mentioning mental illness is small, at 2%, it is higher than in previous years, when no more than 1% named it as the top problem. The increase could be related to the media attention the condition has received after it was mentioned as a possible factor in several U.S. mass shootings.

Although Gallup has asked Americans about the most urgent health problem facing the country periodically since 1987 and annually since 2001, this is the first poll conducted since major portions of the new healthcare law were rolled out. Two of the main issues the law is designed to address -- healthcare access and cost -- remain the most vexing to Americans. In particular, the percentage citing cost as the central problem is the highest since 2008.

Disapproval of the Affordable Care Act has recently spiked. But these data indicate that many Americans appear to agree with two of the rationales for the law, namely that healthcare is too expensive and that many struggle with obtaining access to these vital services. Because major portions of the act have only recently gone into effect and still others have yet to come online, it is hard to assess how the legislation is changing Americans' perceptions on these core points. Fewer Americans, relative to the recent past, say access is the top problem but the share of Americans citing cost as a challenge is creeping back up to where it was before the law was passed. It appears the verdict thus far is mixed.