skip to main content
Economy
In the U.S., Economic Confidence Continues Its Recovery

WASHINGTON, D.C. -- Americans' confidence in the economy is still slowly recovering from its government shutdown-induced plunge. Gallup's Economic Confidence Index averaged -22 last week, significantly improved from -39 during the second week of the federal government shutdown in October but below the -15 found in mid-September. Still, confidence has a long way to go to bounce back to its peak of -3 reached in late May and early June. 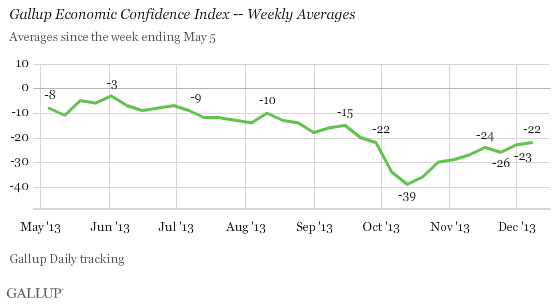 In the first 2 1/2 weeks after the government shutdown ended, confidence improved 10 full points, from -39 to -29. Since then, the index has improved more gradually, moving up a total of seven points over the last five weeks.

The index last week was similar to the -23 registered the week before, but this masks a drop in confidence at the beginning of the week and a gain toward the end. Gallup's three-day rolling averages show that most of the improvement happened after the Bureau of Labor Statistics released a positive labor report on Friday, showing the unemployment rate in November dropping to its lowest level in five years. The index was -25 for Monday-Wednesday interviewing and -19 for Friday-Sunday interviewing.

From a broader perspective, the Gallup Economic Confidence Index -- which is based on Americans' assessments of current U.S. economic conditions and their perceptions of whether the economy is getting better or worse -- remains in negative territory. But despite drops in confidence this year after the fiscal cliff deal, automatic budget sequestration cuts, and the recent government shutdown, the yearly average is on pace to be the highest since Gallup began tracking economic confidence daily in 2008.

Perceptions of Future Conditions Have Only Partially Recovered

The outlook component fell much further than the current conditions component did during the shutdown and is still far off from its mid-September level. Americans' net economic outlook score rose to -22 last week from -46 in mid-October, but remains well below the -11 measured in mid-September. The current score represents 37% who said the economy is getting better and 59% who said it is getting worse.

On the other hand, Americans' assessments of the current state of the U.S. economy have almost completely rebounded. The net current conditions score last week was -21, up from -32 during mid-October and close to the -18 found in mid-September. The current score represents 17% of Americans who say the economy is "excellent" or "good," while 38% say it is "poor." 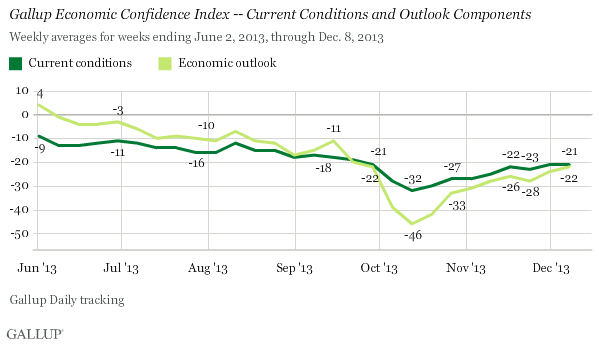 As Americans' confidence in the economy continues to recover from its government shutdown-fueled slide, budget negotiations are once again heating up in Washington. Congressional negotiators are aiming to have a deal to reduce automatic spending cuts and fund the federal government by the Jan. 15 deadline. If federal lawmakers reach a fiscal deal without partisan wrangling, it could boost consumer confidence.

Additionally, if the positive momentum in the labor market continues, and stock prices and home values continue to rise, it may be enough for Americans to be, on balance, more positive than negative about the economy next year.

Results for this Gallup poll are based on telephone interviews conducted Dec. 2-8, 2013, on the Gallup Daily tracking survey, with a random sample of 3,038 adults, aged 18 and older, living in all 50 U.S. states and the District of Columbia.

The percentage of Americans who rated their lives highly enough to be considered "thriving" ticked up in November after declining the prior five months. Americans' life ratings mirror recent changes in economic confidence and standard of living perceptions.

In U.S., Wealthier Most Likely to Do Holiday Shopping Online

Wealthier Americans are more likely to say they will do their holiday shopping online than in traditional retail stores, and are far more likely than other income groups to plan to shop online.