skip to main content
Economy
In U.S., Wealthier Most Likely to Do Holiday Shopping Online

PRINCETON, NJ -- Americans with annual household incomes of $75,000 or more are significantly more likely than lower- and middle-income Americans to say they are "very likely" to do at least some of their holiday shopping online. In fact, the Internet looks to be the most common place to find wealthier shoppers this holiday season, with more saying they will shop online than in department stores, discount stores, and specialty stores.

These results from a Gallup poll conducted Nov. 7-10 show that Americans who earn less than $30,000 per year are the least likely income group to say they will do their holiday shopping online (15% very likely); they are most likely to say they will shop at discount stores (43%) or department stores (38%). Americans earning between $30,000 and $74,999 are more divided in their preferences on where to shop: 34% are very likely to do their shopping online, 41% in department stores, and 42% in discount stores.

Americans with higher education levels are more likely than those with lower education levels to say they will do their holiday shopping online and less likely to mention department and discount stores. This pattern is likely attributable to the high correlation between income and education.

Online Shopping Not Dominant Among Young or Male Americans

Americans younger than 50 are more likely to say they will do their holiday shopping online (41%) compared with those 50 and older. For those younger than 50, online shopping is as popular as any other shopping channel, but is not dominant.

Few Americans aged 65 and older say they plan to shop online, and this group is also less inclined than those who are younger to say they are very likely to shop at discount or specialty stores.

Women are slightly more likely than men to say they will shop in department stores and discount stores, though these differences are not statistically significant. Men and women are equally likely to plan to do their holiday shopping online. 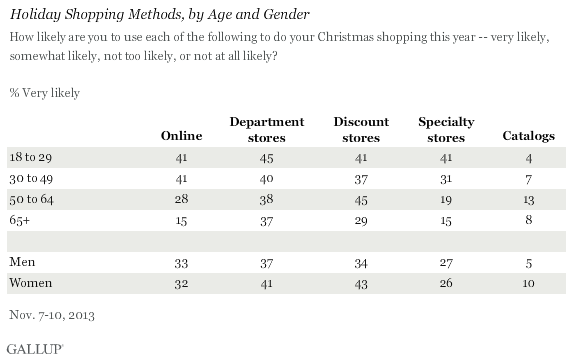 Gallup previously found that online holiday shopping is increasing in popularity, but that department and discount stores remain the most common channels for holiday shopping. However, this pattern is not consistent across demographic groups. Upper-income Americans are the group most likely to say they will do their holiday shopping online, which is important information for retailers that are likely interested in targeting consumers with the greatest amount of discretionary income.

Additionally, young adults are more likely than older adults to prefer to do their holiday shopping online, probably because fewer older Americans spend time online. However, young adults, many of whom have used computers for their entire lives, are no more likely to prefer online holiday shopping over other channels. Rather, it is wealthy and highly educated Americans who disproportionately favor online shopping.

For results based on the total sample of 562 men, the margin of sampling error is ±5 percentage points at the 95% confidence level.

For results based on the total sample of 477 women, the margin of sampling error is ±6 percentage points at the 95% confidence level.