PRINCETON, NJ -- U.S. consumers' self-reported spending in stores, restaurants, gas stations, and online was $100 per day during Thanksgiving week, significantly higher than the average for the entire month of November. The incremental increase in spending last week compared with the November average is slightly higher than what Gallup has observed over the previous five Thanksgivings. 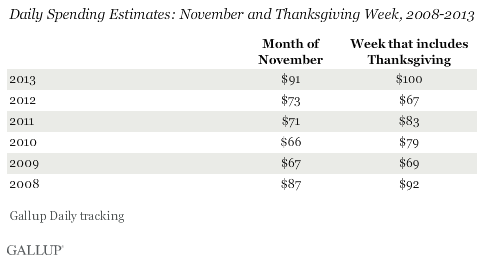 Monthly consumer spending in general has been up this year compared with the same months in previous years. Overall average spending in November was $18 a day higher than in November 2012, and more broadly, this year's November spending is the highest in the six years Gallup has been tracking spending, slightly ahead of November 2008.

The $100 spent on average during Thanksgiving week is also the highest of any Thanksgiving week of the past six. Still, given the overall more robust spending environment in 2013, it is not unusually high. Spending averaged $104 a day in the week ending Aug. 11, and was in the high $90 range for several weeks in July. 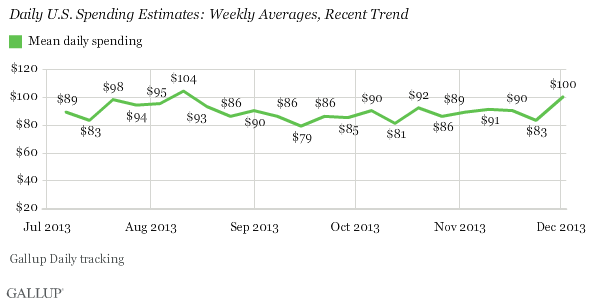 Gallup's three-day rolling averages of daily spending showed a predictable uptick as Thanksgiving approached this year. Self-reported spending began to rise on Tuesday, Wednesday, and Friday (there was no interviewing on Thanksgiving), and peaked at $108 between Wednesday and Saturday, and $109 between Friday and Sunday. Spending was down slightly from Saturday to Monday, which included Cyber Monday, but was still above $100. Importantly, spending appears to be continuing at a relatively high level, averaging $102 for Sunday through Tuesday interviewing. 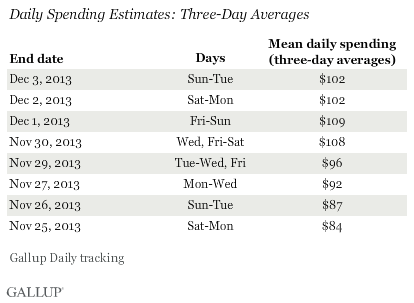 Still, the triple-digit averages over the past several days are not new highs for the year. Americans' spending averaged more than $100 daily at times in November, October, and other months -- particularly August, when the three-day averages were more than $120 at several points.

On an absolute basis, spending this Thanksgiving week was higher than any observed for the past six Thanksgiving weeks, and, as is typically the case, was higher than spending for the other weeks of the month. However, this uptick occurs in an environment in which consumer spending in general, as measured by Gallup, is up, meaning the increase in spending does not solely reflect a boom in spending for Christmas and holiday presents, but rather is part of a broader uptick this year.

Spending appears to be continuing at a high level through Tuesday of the week after Thanksgiving, suggesting that holiday spending this year may be spread out rather than concentrated on just one day, such as Black Friday.

Results for this Gallup poll are based on daily telephone interviews conducted on the Gallup Daily tracking survey, with random samples of approximately 500 adults per day, aged 18 and older, living in all 50 U.S. states and the District of Columbia.

For results based on the total sample of 3,069 national adults interviewed in the week Nov. 25-Dec. 1, the margin of sampling error is ±2 percentage points at the 95% confidence level.

For results based on the total sample of 14,352 national adults interviewed in November, the margin of sampling error is ±1 percentage point at the 95% confidence level.

For results based on the total samples of approximately 1,500 national adults interviewed for any three-day period, the margin of sampling error is ±3 percentage points at the 95% confidence level.