PRINCETON, NJ -- Gallup's Job Creation Index was relatively stable in November at +20, remaining in line with readings since April. At the same time, last month's score is the highest recorded in any November since Gallup began tracking this measure daily in 2008. The index remains much more positive now than during the 2008-2009 recession and its immediate aftermath. 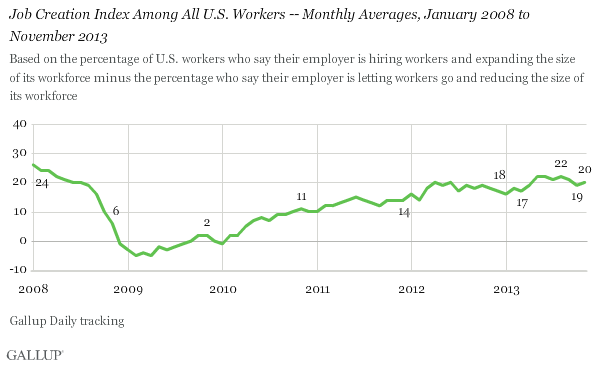 The index for November reflects the difference between the 36% of U.S. workers who say their employer is expanding its workforce and the 16% of workers whose employers are letting people go.

Forty-three percent say their employer is not changing the size of its workforce, a proportion that has remained relatively flat over the past few years. 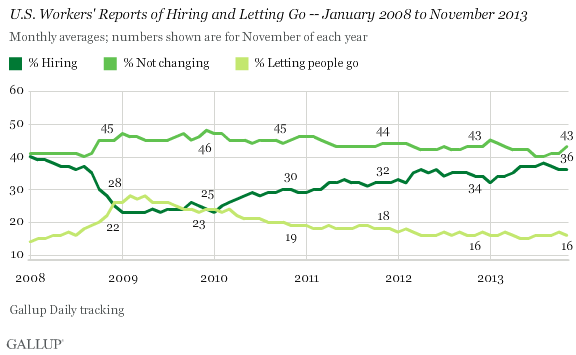 Employers in the Midwest continue to lead the way in job creation, with the Job Creation Index in this region standing in the low to mid-20s since February. The West saw a three-point increase in November, to +20 from +17, possibly reversing a downward trend between June and October. The index rose two points in the East, and now stands at +18.

The index in the South has dropped four points since June, though it remains higher than in the East, which has had the lowest scores for almost all of the past year. 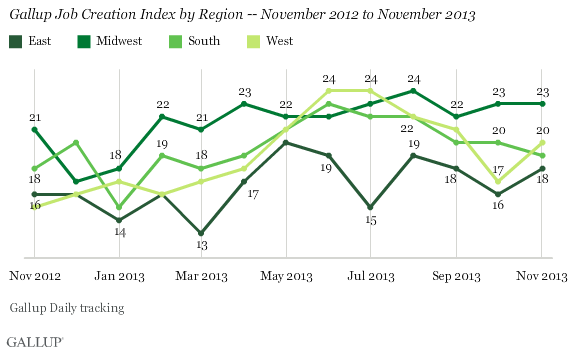 After falling slightly in October, the jobs situation in the U.S. showed little change in November, but it stands above levels from recent Novembers. Job creation remains higher than it was from late 2008 through early 2012, but has not yet rebounded to the pre-recession levels seen in early 2008. Job growth is happening at different paces across the country, with the rate in the Midwest remaining comparatively high, and job creation in the South sliding continuously since June.

Results for this Gallup poll are based on telephone interviews conducted Nov. 1-30, 2013, on the Gallup Daily tracking survey, with a random sample of 16,701 adults, aged 18 and older, who are employed full or part time, living in all 50 U.S. states and the District of Columbia.

The percentage of Americans who report they will likely do their Christmas shopping online continues to rise. However, traditional department and discount stores remain Americans' most popular places to do holiday shopping this year.