PRINCETON, NJ -- As the Christmas shopping season gets underway in earnest this Friday, for the first time, a majority of Americans, 53%, say they are very or somewhat likely to do their Christmas shopping online this year. This is the highest percentage since Gallup first asked the question in 1998. Meanwhile, the percentages of Americans shopping for gifts in department stores and discount stores have been slowly declining, but these still beat the Internet as the places Americans will shop for the holidays. 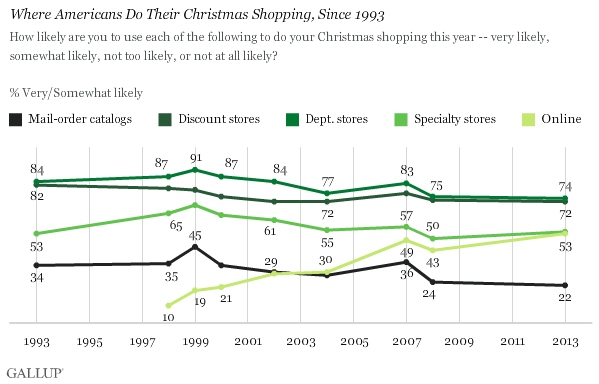 Based on a Nov. 7-10 Gallup poll, the largest change in Christmas shopping behavior over the past 15 years has been an increase in the percentage of Americans who intend to do their holiday shopping online. In 1998, 10% said they were likely to shop online for Christmas. The 2013 reading of 53% reflects a 43-percentage-point increase in the 15 years since this first poll.

Meanwhile, many other methods of shopping have fallen in popularity. Americans are now less likely to do their holiday shopping in department stores (a 10-point drop since 1993), discount stores (also a 10-point drop), and catalogs (down 12 points).

Online shopping first moved ahead of catalog shopping in 2004, and now matches the percentage likely to shop in specialty stores. But discount stores and department stores, despite the declines, maintain a healthy advantage over online shopping.

As this year's kickoff to the holiday shopping season approaches, traditional department and discount stores remain the go-to places for Americans when they do their Christmas shopping. However, as more and more of Americans' lives are conducted online, so too is their holiday shopping. In the past two decades, online shopping has become a major player in the holiday retail space. As recent Gallup research has shown, some Americans are now using brick-and-mortar stores as "showrooms," visiting stores to examine products but ultimately making the purchase online.

So it may be years before holiday shopping online surpasses shopping in discount and department stores, but the trend doesn't show signs of stopping.

Americans' self-reported daily spending averaged $88 in October, up from $84 in September and on par with the 2013 average. The October spending average is $16 higher than it was in the same month last year.