WASHINGTON, D.C. -- Americans' self-reported daily spending averaged $88 in October, up slightly from $84 in September but still below the $95 from August -- the highest average in any month in five years. Americans' average daily spending exceeds the $72 found in the same month last year and is the highest for any October since 2008. 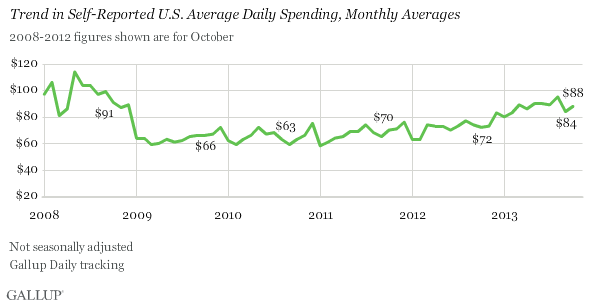 Gallup asks Americans on its Daily tracking survey to report how much they spent the prior day, excluding household bills and major purchases like a car or home. The data give an estimate of discretionary spending.

Although partisan bickering in Washington about the recent shutdown and the debt ceiling limit negatively affected Americans' economic confidence, Gallup found that it does not seem to have influenced their holiday spending plans. Still, the plunge in economic confidence that took place during the government shutdown could negatively affect spending levels in the near future.

October Spending Strong Among Most Subgroups

Upper-income Americans' self-reported spending increased by an average of $10 in October, suggesting that fiscal debates in Washington did not deter them from spending. In fact, spending increased at least slightly across most subgroups. 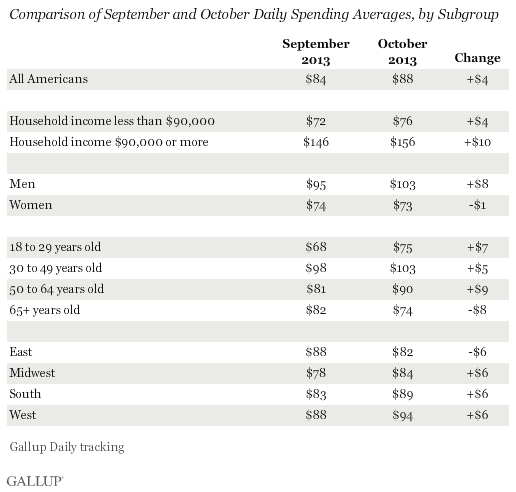 Trends in consumer spending can serve as an indicator of future economic growth in the U.S. Personal consumption expenditures account for roughly 70% of GDP, and with self-reported spending trending upward thus far in 2013, continuing modest growth is possible. The Conference Board has forecasted U.S. GDP growth of 1.7% for the fourth quarter of 2013.

However, Americans' standard of living perceptions have declined and economic confidence remains deeply negative. As job reports continue to fall short of expectations and uncertainty about the debt limit and the federal budget persist, it is possible that consumer spending will decline in the coming months. Americans' soured optimism has yet to affect spending, but lag effects are still a concern.

Results for this Gallup poll are based on telephone interviews conducted Oct. 1-30, 2013, on the Gallup Daily tracking survey, with a random sample of 15,438 adults, aged 18 and older, living in all 50 U.S. states and the District of Columbia.

The Gallup Economic Confidence Index rose six points last week to -30, after a three-point gain the week before. This represents only a partial recovery from the government shutdown-induced plunge in confidence in early October.