PRINCETON, NJ -- Americans reported spending $91 per day, on average, throughout November. This estimate is up slightly from October, and exceeds those from prior Novembers, as spending estimates this year continue to outpace those from 2009-2012. 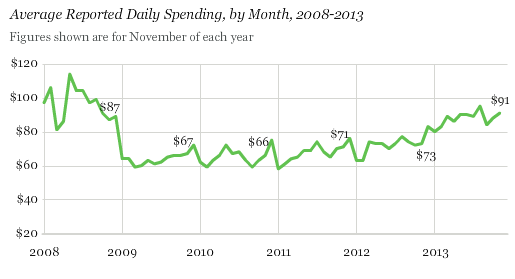 The results are based on Nov. 1-30 Gallup Daily tracking. Each night, Gallup asks Americans to say how much they spent the prior day, aside from normal household bills and major purchases such as homes or cars. The data give an estimate of discretionary spending.

November is the traditional start of the holiday shopping season, and it usually ranks among the highest spending months of the year, with December typically the highest. However, October is also a fairly strong month for spending, so there has been only modest change between the October and November estimates, with November slightly higher. The main exception to the pattern was in 2008, when Americans began to pull back on spending amid the deepening financial crisis. 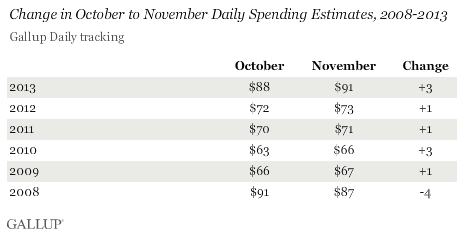 Excluding 2008, the average October to November change has been a $2 increase. The November to December increase is typically much more substantial, averaging a little higher than $7 since 2009, including a $10 surge last December.

Consumer spending was up slightly in November from October. Spending in general in 2013 remains much stronger than it had been during the long slump from 2009 to late 2012 after the financial crisis. If daily reported spending increases substantially, as is typical, from November to December, the coming month could be the strongest for spending that Gallup has measured since 2008.

It is unclear how that may translate to holiday spending specifically. Certainly some portion of December spending will be going toward gift buying, but much of it will not. Gallup has twice asked Americans to estimate how much they will spend on gifts this holiday season, with the November figure less optimistic about a strong holiday season than the initial October estimate. Nevertheless, even the weaker November holiday shopping estimate predicts an increase in retail spending during the holiday season over last year. Gallup will get a final read on holiday spending plans early this month.