WASHINGTON, D.C. -- Americans' confidence in the economy stalled last week after improving for five consecutive weeks. Gallup's Economic Confidence Index slipped two points to -26, but remains more positive than the -39 found during the recent government shutdown. Still, weekly confidence is significantly below the -15 mark measured leading up to the shutdown, as well as the nearly six-year high of -3 found in early June. 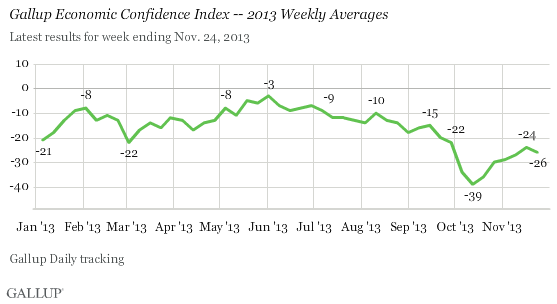 Americans' confidence in the economy almost entered positive territory in early June, but the momentum was short-lived. The index slowly fell throughout the summer months. It saw several weeks of steeper declines leading up to the government shutdown on Oct. 1, and fell 12 points during the first week of it -- the sharpest drop since Lehman Brothers collapsed in September 2008. Before the shutdown ended, confidence had declined to -39.

Gallup's Economic Confidence Index is based on Americans' assessments of current economic conditions in the U.S. and their perceptions of whether the economy is getting better or worse.

Americans' net economic outlook score was -28 last week, down from -26 the prior week. The current score represents 34% who said the economy is getting better and 62% who said it is getting worse. The public's perception of future economic conditions is better than the -46 measured during the shutdown, but has a long way to go to reach the -11 from mid-September.

Last week's net current conditions score was -23, similar to the -22 of the prior week. The current score represents 15% of Americans who say the economy is "excellent" or "good," and 38% who say it is "poor." Americans' assessments of the current economic situation have substantially improved since mid-October, but are still slightly below pre-shutdown levels. 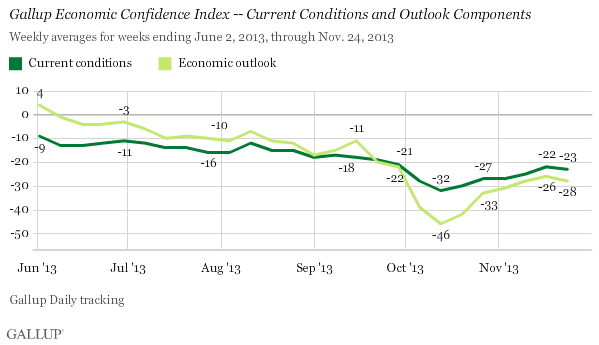 Americans' confidence in the economy faltered last week after slowly but steadily rising since mid-October, when the partial government shutdown ended. It is unclear whether this slight drop represents a reversal in the trend or a temporary pause on an upward trajectory toward improved confidence.

However, the lack of continued improvement is notable against a backdrop of almost daily new record-high U.S. stock prices and fewer-than-expected new filings for unemployment benefits. At the same time, however, the unemployment rate has not improved much over the past few months and the housing market is showing signs of slowing down as mortgage rates rise.

To the extent that economic confidence affects Americans' spending, a further drop could be a sign of trouble for holiday spending and U.S. retailers.

Results for this Gallup poll are based on telephone interviews conducted Nov. 18-24, 2013, on the Gallup Daily tracking survey, with a random sample of 3,055 adults, aged 18 and older, living in all 50 U.S. states and the District of Columbia.