PRINCETON, NJ -- For the first time, a slim majority of Americans say they have an unfavorable opinion of the Tea Party movement. About one-third view the movement favorably, a new low. A smaller percentage, 22%, in a separate question identify themselves as supporters of the movement, while 24% describe themselves as opponents. Nearly half (48%) are neutral. 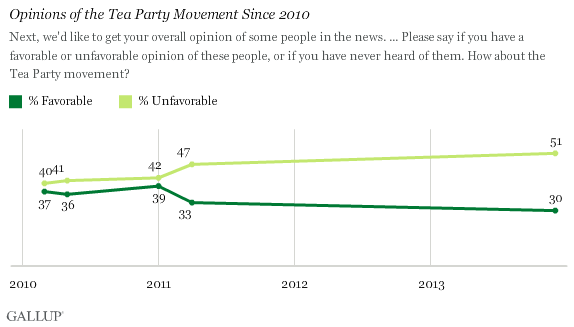 The majority of Republicans, 58%, say they have a favorable opinion of the Tea Party movement, with slightly more than one-quarter (28%) viewing it unfavorably. Democrats, on the other hand, are largely unfavorable toward the group, with 74% reporting an unfavorable view. Independents fall in between the two parties, but are more likely to view the movement unfavorably than favorably.

Though the Tea Party espouses conservative fiscal goals, self-identified conservatives, as a whole, are somewhat divided about the movement. A full third (34%) of conservatives have an unfavorable opinion of the group, while 48% are favorable.

By contrast, liberals are largely critical of the Tea Party: 80% view it unfavorably. Moderates' views fall between those of liberals and conservatives, but still tilt negative. 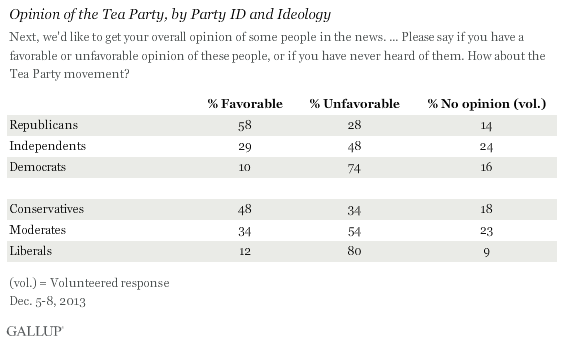 Supporters and Opponents of the Tea Party Have Dwindled Since 2012

The percentage calling themselves opponents reached 29% in February and August 2012, close to the all-time high of 30%. This percentage has fallen in 2013, with the largest drop between September and December. 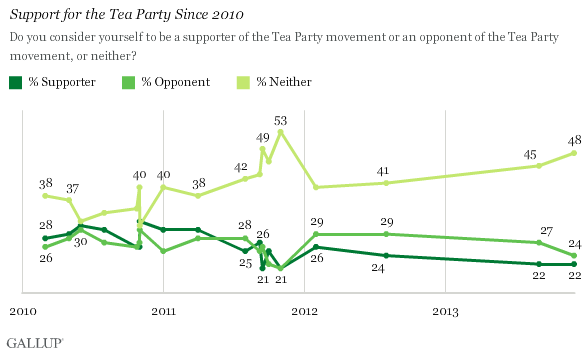 The image of the U.S. Tea Party movement was fairly neutral in 2010, when its political activism may have helped Republicans retake majority control of the U.S. House. By 2011, however, more Americans viewed it unfavorably than favorably, and today they hold a more negative opinion than ever.

The Republican and Democratic parties have also been suffering from an increasingly negative public image, and as long as the Tea Party is viewed as contributing to the unpopular partisan conflict in Washington, rather than remedying it, the movement is likely to remain controversial.

Still, this movement does not seem focused on becoming a major third party in the U.S., but rather on pushing the Republican Party to the ideological right. Its popularity among Republicans may be most important, and on that score, the Tea Party is still doing fairly well.

Most Americans, 63%, say they do not have an opinion about the goals of the Occupy Wall Street movement, though more approve (22%) than disapprove (15%). Fifty-six percent of Americans say they are following news about the movement closely, including 18% who say very closely.