PRINCETON, NJ -- Three issues -- dissatisfaction with government, the economy, and healthcare -- are the clear leaders when Americans name the most important problem facing the country. Beyond those, unemployment, the federal budget deficit, moral and ethical decline, and poverty are mentioned by at least 5% of Americans. 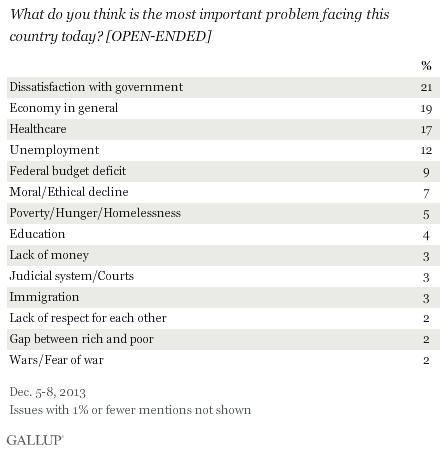 The top five issues in the Dec. 5-8 poll have typically ranked among the top five all year. The economy in general was the top issue for most of the year until it was displaced by government dissatisfaction in October, during the partial federal government shutdown. Mentions of government dissatisfaction peaked at 33% that month, but have fallen in each of the last two months. Mentions of the economy are also down from earlier this year. 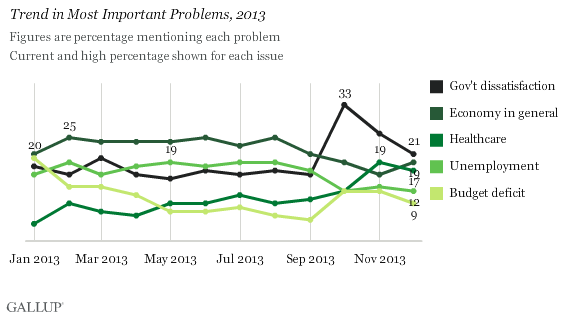 Meanwhile, mentions of healthcare have been higher in the last two months, as problems with the rollout of major provisions of the Affordable Care Act, or "Obamacare," have dominated the news.

Over the course of the year, fewer Americans have named unemployment as the most important problem. The 12% who currently name that issue is the lowest in almost five years, since January 2009.

Americans' perceptions of the federal budget deficit as a top problem have waxed and waned this year. In January, just after the government reached agreement to avoid the "fiscal cliff" income tax increases for most Americans, a 2013 high of 20% named the budget the top issue. Mentions of the budget stayed above 10% through April, as the government was unable to reach agreement to avoid the March 1 budget sequester. After fading in the summer months, the budget again became a prominent issue in the fall, when federal lawmakers' failure to reach a budget agreement led to the government shutdown.

Democrats and Republicans are about equally likely to name healthcare as the most important problem facing the country, as they have been in recent months.

The two parties' supporters diverge at least somewhat on the other issues, with Republicans more likely to see the government and the deficit as problems, and Democrats more likely to believe the economy and unemployment are the top issues needing attention. Independents' concerns about government, the economy, and unemployment are above average, while their concerns about healthcare and the deficit are below average.

While fewer Americans express dissatisfaction with government today than in the prior two months, it still ranks as one of the most important problems in the country, essentially tied now with the economy and healthcare at the top of the list. Healthcare has risen in prominence as the 2010 healthcare law is being more fully implemented.

Meanwhile, concern about unemployment has declined this year, to its lowest point in nearly five years. It may continue to recede as a top issue if the Bureau of Labor Statistics continues to report lower unemployment estimates.

Also, this week Democratic and Republican congressional budget leaders reached a bipartisan agreement on a budget deal that would fund the government through 2015. If it passes, the seemingly constant wrangling over budgets may go away and make that issue of less concern to Americans. That bipartisan agreement may also help reduce Americans' level of dissatisfaction with the government.

Americans' job approval rating for Congress in 2013 averaged 14%, the lowest annual average in Gallup's history, including a 12% reading in December. Congressional approval has averaged below 20% for each of the last four years.