PRINCETON, NJ -- Reinforcing the power party identification has in shaping Americans' views of many aspects of the world around them, Republicans and Democrats differ by at least 10 percentage points in their honesty and ethics ratings of six of 22 professions included in Gallup's 2013 update. Republicans rate the honesty and ethical standards of police officers, clergy, military officers, and pharmacists higher than Democrats do. In turn, Democrats are more positive about judges and TV reporters. 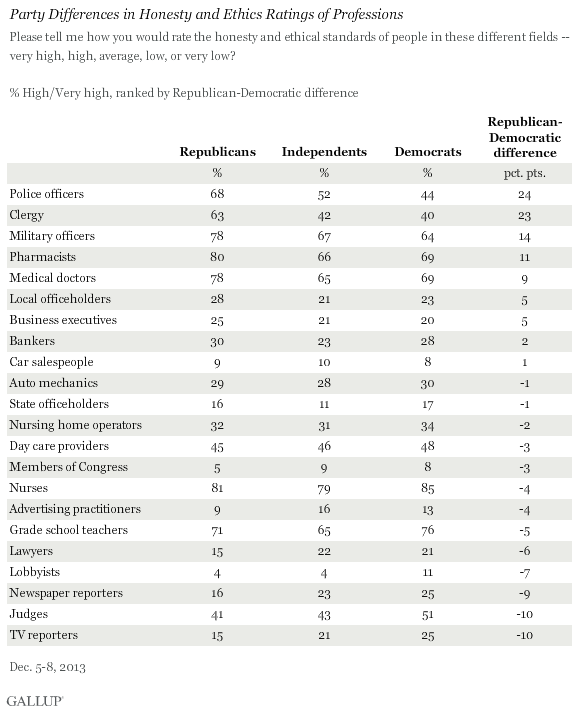 Democrats' higher ratings of TV reporters, newspaper reporters, judges, and lawyers may be related to their greater affinity with the media and legal professions. Gallup has consistently shown Democrats expressing higher trust in the media than Republicans do, and rating the legal field much more positively than Republicans do.

Younger adults -- those between the ages of 18 and 34 -- rate all but four of the 22 professions tested at least marginally more positively than those aged 55 and older. That suggests younger Americans may be more trusting, or perhaps less cynical, than older Americans.

The primary profession rated more positively by older than younger Americans is the clergy, with an 18-point difference. Younger Americans, who tend to be less religious, likely also hold religious leaders in lower esteem than older Americans do. 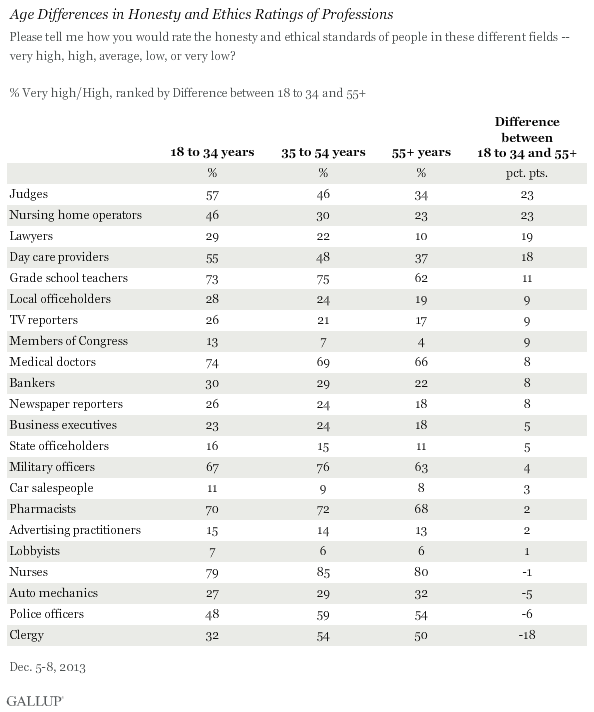 Younger Americans rate judges' and lawyers' honesty and ethical standards much higher than older Americans do.

They are also significantly more likely to give higher ratings to day care providers, nursing home operators, and grade school teachers. Younger adults clearly have more recent experience with grade school teachers, and likely day care as well. Many of today's younger adults may themselves have attended day care regularly, given the increasing percentage of single-parent or two-working-parent homes, or may currently have a child of their own in day care.

Americans probably base their honesty and ethics ratings of professions on various information sources. One is clearly stereotypes of the kinds of people who enter into certain professions, with Americans generally holding car salespeople, lobbyists, and lawyers in lower regard, even though there are surely some honest people working in those professions. A second source could be Americans' own real-world experience with people who work in those professions. A third important source are news stories, particularly scandals, involving certain professions.

But Americans' political and ideological beliefs also appear to color their opinions. Certainly Republicans' tendency to be more religious is a key factor in their more positive ratings of clergy, and Democrats' generally higher trust in the news media is a factor in their ratings of news reporters.

Also, one's stage in life appears to make a difference in how one rates various professions. Younger Americans have typically given higher honesty and ethics ratings than older Americans to most professions.

For results based on the sample of 270 Republicans and 287 Democrats, the margin of sampling error is ±8 percentage points at the 95% confidence level.

For results based on the sample of 190 adults aged 18 to 34, the margin of sampling error is ±9 percentage points at the 95% confidence level.

For results based on the sample of 536 adults aged 55 and older, the margin of sampling error is ±5 percentage points at the 95% confidence level.