WASHINGTON, D.C. - More Americans, 42%, say they are financially worse off now than they were a year ago, reversing the lower levels found over the past two years. Just more than a third of Americans say their financial situation has improved from a year ago. 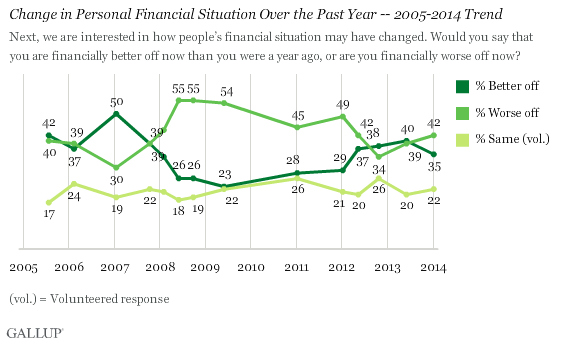 These results come from Gallup's annual "Mood of the Nation" poll, conducted Jan. 5-8. Gallup has found that Americans' economic confidence, self-reported consumer spending, and perceptions of job creation improved in 2013. Despite Americans' more positive views of the overall U.S. economy in 2013, nearly two-thirds believe their personal financial situation deteriorated or was stable over the past year.

Though down from mid-2013, the percentage of Americans saying they are financially better off than a year ago is nearly in line with the historical average (38%), spanning 1976-2014. On the other hand, the share of Americans saying they are financially worse off compared with a year ago is, by historical standards, high -- eight percentage points above the average. The record high of 55% occurred in May and September 2008, the year (and, in the latter case, the month) of the global financial meltdown. 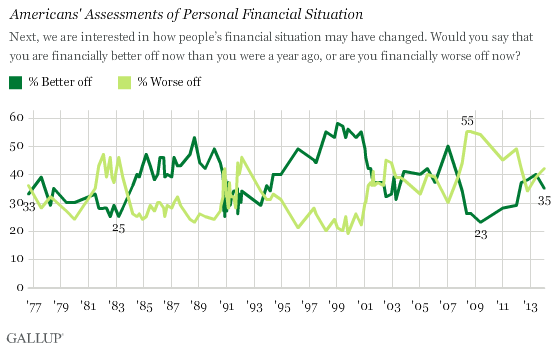 Most Americans Have High Economic Hopes for Year Ahead

While many Americans say the past year was a financial dud, a majority (55%) predict that at this time next year they will be financially better off. Optimism about the future may still be the predominant feeling, but the overall positivity of the nation's personal financial predictions appears to be easing, compared with the average during the past decade. 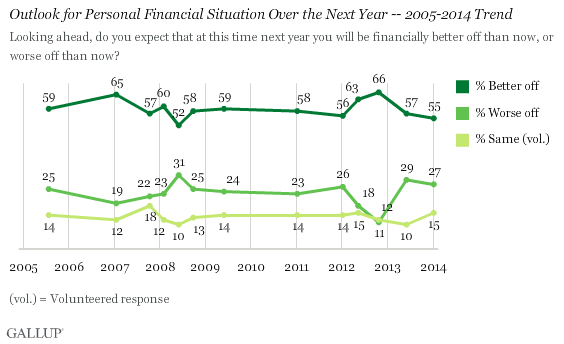 Despite a sustained, if sluggish, economic recovery that has lasted nearly five years, most Americans report being no better off financially than they were a year ago. Indeed, the share of Americans saying last year put them in a worse financial position is on the higher end of the 1976-2014 trend. Although this would seem to suggest that many Americans begin this year in a state of financial unease, a majority instead believe the next year will be financially uplifting. As previous years show, Americans are typically more positive about their future compared with their assessments of the past, a testament to the enduring sense of optimism many Americans share about their financial future.