WASHINGTON, D.C. -- Two out of three Americans are dissatisfied with the way income and wealth are currently distributed in the U.S. This includes three-fourths of Democrats and 54% of Republicans. 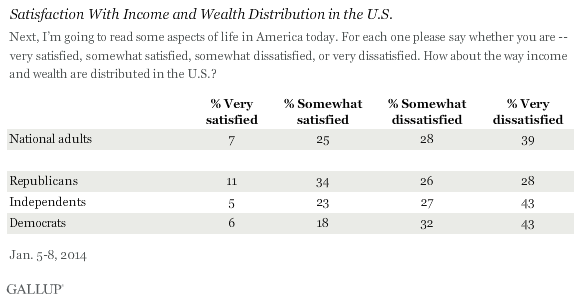 President Barack Obama spoke about income disparities in a Dec. 4, 2013, speech, saying he wanted to prioritize lowering income disparity and increasing opportunities, particularly for the poor, during the rest of his second term. He most likely will return to that topic in his State of the Union speech at the end of the month. Gallup's Jan. 5-8 Mood of the Nation survey included a question asking Americans how satisfied they are with income and wealth distribution in the U.S. Few, 7%, report that they are "very satisfied" with the distribution, while 39% of Americans say they are "very dissatisfied."

Attitudes about the distribution of income and wealth are highly related to partisanship. Republicans, at 45% very or somewhat satisfied, express the highest satisfaction with the current wealth disparity in the U.S. Democrats are much less satisfied, at 24%, with independents closer in satisfaction to Democrats, at 28%. Furthermore, almost half (43%) of Democrats and independents express strong dissatisfaction with the current state of wealth and income distribution.

Dissatisfaction With the Opportunity to Get Ahead Remains High

The same poll updated a long-time Gallup trend, finding that 54% of Americans are satisfied, and 45% dissatisfied, with the opportunity for an American "to get ahead by working hard." This measure has remained roughly constant over the past three years, but Americans are much less optimistic about economic opportunity now than before the recession and financial crisis of 2008 unfolded. Prior to that, at least two in three Americans were satisfied, including a high of 77% in 2002.

In contrast to the question about income distribution in the same poll, satisfaction with the opportunity to get ahead does not show a significant partisan split, with 61% of Republicans and 60% of Democrats saying they are satisfied. Among independents, 45% are satisfied and 53% are dissatisfied. Independents are the only group in which a majority are dissatisfied with opportunities to get ahead by working hard.

Obama will almost certainly touch on inequality in his State of the Union address on Jan. 28. This will certainly resonate in a general sense with the majority of Americans who are dissatisfied with income and wealth distribution in the U.S. today. Members of the president's party agree most strongly with the president that this is an issue, but majorities of Republicans and independents are at least somewhat dissatisfied as well.

Although Americans are more likely to be satisfied with the opportunity for people to get ahead through hard work, their satisfaction is well below where it was before the economic downturn. Accordingly, improvement in the U.S. economy could bring Americans' views back to pre-recession levels.