WASHINGTON, D.C. -- True to their "live to work" reputation, some baby boomers are digging in their heels at the workplace as they approach the traditional retirement age of 65. While the average age at which U.S. retirees say they retired has risen steadily from 57 to 61 in the past two decades, boomers -- the youngest of whom will turn 50 this year -- will likely extend it even further. Nearly half (49%) of boomers still working say they don't expect to retire until they are 66 or older, including one in 10 who predict they will never retire. 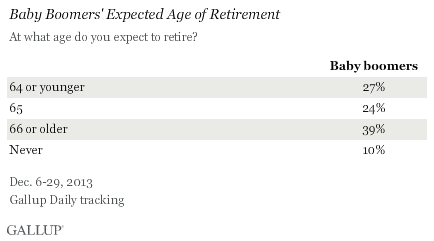 Concerns about money likely play a significant role in explaining why so many baby boomers see themselves working longer. Even before the 2008-2009 recession, financial advisers were warning that some baby boomers were carrying too much debt, saving too little, and relying too heavily on Social Security to retire comfortably. And then came the economic collapse -- a perfect storm of layoffs, pension and stock losses, and plummeting home values -- which was particularly ill-timed for boomers who might otherwise have been in financial shape to retire on schedule with the start of their Social Security benefits.

Gallup finds that baby boomers who strongly agree that they currently "have enough money to do everything [they] want to do" expect to retire at age 66. Boomers who strongly disagree with this statement predict they will retire significantly later, at age 73. 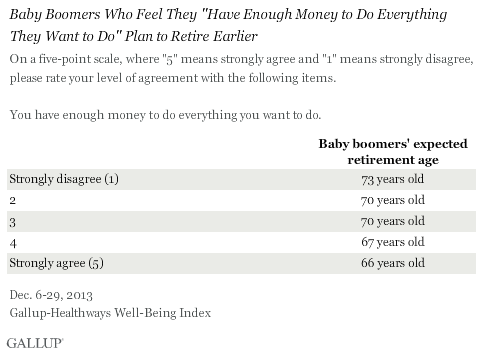 Aside from financial considerations, boomers' notoriously hard-charging work ethic and drive to get ahead may make it difficult for them to envision downshifting into the slower pace of retired life. But being wired for work doesn't necessarily guarantee that all baby boomers are engaged employees who are involved in, enthusiastic about, and committed to their jobs. About one in three (31%) employed boomers are engaged at work, compared with 38% of traditionalists (those born before 1946), 30% of Generation X workers, and 28% of millennials. However, baby boomers who expect to retire after age 65 are slightly more engaged (34%) in their jobs than boomers overall.

Baby Boomers Still a Substantial Part of the Workforce

As the largest generation born in U.S. history, baby boomers' sheer numbers coupled with their reluctance to retire will likely ensure that their influence endures in the workplace in the coming years. Although the first wave of boomers became eligible for early retirement under Social Security about six years ago, the generation still constitutes about one-third (31%) of the workforce, similar to percentages for millennials (33%) and Generation X (32%).

Whether by choice or necessity, baby boomers will remain a sizable proportion of the workforce in the years ahead, with many expecting to work past the average U.S. retirement age of 61 and even the traditional retirement age of 65. As they continue to age and work, it is important that their organizations build workplaces with outstanding managers who leverage the experiences of older workers by positioning them to do what they do best -- listening to their insights and opinions, and continuing to develop their talents into strengths.

By investing in baby boomers' engagement, employers will reap the benefits that an engaged workforce brings to their bottom line. No matter what their age, engaged workers tend to have higher well-being, better health, and higher productivity than their not-engaged and actively disengaged counterparts. A targeted effort to engage baby boomers could have important ramifications for healthcare costs and productivity for individual workplaces and the overall U.S. economy.

Susan Sorenson, Gallup Writer and Editor, contributed to this story.

Additional insights on retirement are available through the Wells Fargo/Gallup Investor and Retirement Optimism Index. The Index provides quarterly updates on U.S. investors' economic optimism, and on their views about a variety of savings and retirement issues. The November 2013 Wells Fargo/Gallup Investor and Retirement Optimism Index survey found investors more confident in the stock market than in other aspects of the economy; still, fewer than four in 10 said the stock market is an excellent or good way for average Americans to grow their assets.

Results from working adults reported in this article are based on telephone interviews conducted Jan. 3-Dec. 29, 2013, on the Gallup Daily tracking survey, with a random sample of 85,572 working adults, aged 18 and older, living in all 50 U.S. states and the District of Columbia. For results based on the total sample of working adults, the margin of sampling error is ±1 percentage point at the 95% confidence level.

Baby boomers' views about the age they expect to retire are based on telephone interviews conducted Dec. 6-Dec. 29, 2013, on the Gallup Daily tracking survey, with a random sample of 1,929 adults born between 1946 and 1964, and living in all 50 U.S. states and the District of Columbia.

Baby boomers' view about having enough money to do what they want are based on telephone interviews conducted Dec. 6-29, 2013, as part of the Gallup-Healthways Well-Being Index survey, with a random sample of 1,929 adults born between 1946 and 1964, and living in all 50 U.S. states and the District of Columbia.

For results based on the total sample of baby boomers born 1946-1964, the margin of sampling error is ±4 percentage points at the 95% confidence level.

Since End of U.S. Recession, More Seniors in Workforce