skip to main content
Politics
Baby Boomers to Push U.S. Politics in the Years Ahead

PRINCETON, NJ -- Baby boomers constitute 32% of the U.S. adult population and, by Gallup's estimate, 36% of the electorate in 2012, eclipsing all other generational groups. Baby boomers have dominated U.S. politics on the basis of their sheer numbers since the late 1970s, when most of the group had reached voting age. Taken as a whole, baby boomers' political leanings are slightly less Democratic than the adult population's, perched between the strong Democratic orientation of the youthful millennials and the more Republican orientation of the older Greatest and Silent generations.

If the party preferences of each generational group were to hold steady in the coming years as the Democratic-leaning baby boomers gradually replace the more Republican Silent and Greatest generations, the country as a whole would likely become more Democratic. That assumes today's children will lean at least slightly Democratic when they reach young adulthood, and thus that Americans who today are younger than 18 grow up to be as Democratic as the young voters they replace.

One difficulty with that projection, however, is that baby boomers' party identification was not steady in the past, so it may change again in the future. Gallup polling at 10-year intervals since 1993 shows baby boomers leaned Democratic in 1993, were divided with a slight Republican tilt in 2003, and remained divided but with a slight Democratic tilt in 2013. These findings are based on party ID that includes independents' leanings, available in Gallup data since 1992.

These 10-year shifts partly mirrored changes in the population as a whole. As ever-changing political dynamics in the country have created broad swings in the strength of each major party, baby boomers' political affiliation has also changed. Thus, boomers' politics could in theory change again in the years ahead, making predictions difficult. 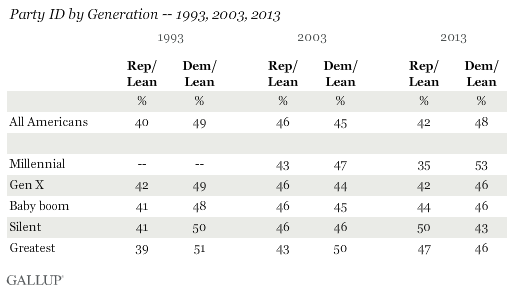 The above analysis is based on baby boomers as a group -- taking the average political views of Americans born between 1946 and 1964 as one broad population segment. Boomers, however, are not monolithic; their political preferences are actually quite different within the 19-year boomer age span. 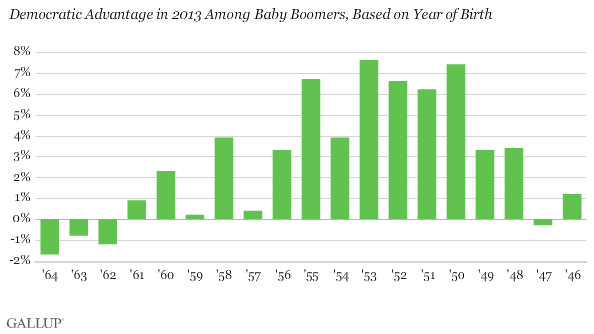 Although the preponderance of baby boomers lean Democratic, the net political advantage varies from a seven- to eight-percentage-point Democratic one for some ages to a one- to two-point Republican tilt for others. Further, both the youngest boomers (born from 1962 to 1964) and the oldest boomers (born in 1946 and 1947) tend to be significantly less Democratic than the middle-year boomers. In particular, boomers born between 1950 and 1953 appear to have the highest Democratic orientation, along with those born in 1955.

These data can be compared with data for baby boomers six years ago, in 2008 -- the first year of Gallup tracking that allows for this detailed type of age-by-age examination of the population. The overall political environment was more Democratic in 2008, with the average Democratic advantage among boomers at +11.6 points in contrast to the +2.8 points in 2013. Still, it appears that the relative structure of boomers' political orientation by age was similar then to what it was in 2013. Those born in the earliest boomer years and those in the latest boomer years were the least Democratic, while those born from the late 1940s through the mid-1950s were the most Democratic. In short, the relative differences across boomer age groups held roughly constant even as the views of all boomers shifted in a less Democratic direction. 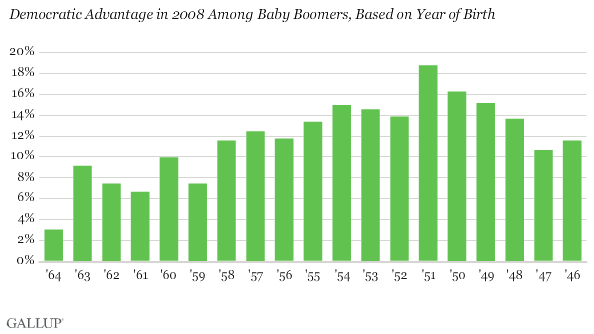 There are many reasons why a particular age cohort of Americans displays a specific political orientation. A key factor could be the political and social environment that prevailed as the segment was reaching adulthood. Thus, for example, the Depression and World War II years affected today's greatest generation, while the Internet has affected today's millennials.

The most Democratic segment of boomers in 2013 -- generally, those born between 1950 and 1955 -- entered adulthood from 1968-1973. This was at the height of the Vietnam War and as race riots were going on in the U.S. It was also at the height of the hippie era, epitomized by the Woodstock festival, and a period of rapid liberalization of Americans' social views.

The youngest boomers, particularly those born in 1960 and later, would have come of age in a different political environment, one marked by the stagflation and tax revolt of the late 1970s, questions about U.S. strength in world affairs, and specific events such as the Iranian hostage crisis and Ronald Reagan's election in 1980. This group is not only less Democratic than baby boomers as a whole, but also significantly less Democratic than the U.S. population.

Thus, the politics of baby boomers are not straightforward. While in the aggregate, boomers are slightly less Democratic than the U.S. population, within the boomer group there appear to be diverse subgroups, associated with the distinct political environments each experienced as they were coming of age politically.

These intra-boomer differences only further complicate the problem of trying to predict what baby boomers' politics will be in their golden years. The next wave of baby boomers to turn 65 will be those born between 1950 and 1955. This group came of age at a highly transformative period in U.S. history, and according to the resilience of their Democratic leanings since 2008, may have the most fixed political views of any boomers. Thus, barring any major political realignment in the country as a whole, they could carry these leanings into their senior years. This would cause seniors more broadly to tilt more Democratic in the short term.

By 2021 and thereafter, however, the more conservative bloc of younger boomers will be entering the ranks of seniors, and -- depending on the broader political dynamics affecting them -- could shift the balance again.

Of course, boomers will also be subject to the multifaceted ramifications of becoming a "senior citizen" as they age and thus, they may bend to forces that shift their political orientations in new ways as they enter this final stage of life.

Predicting the politics of the highly important baby boom generation over the next decade as the group moves into its senior years is highly speculative. But one thing is certain. Baby boomers, holding the distinction of the largest generation in the U.S. population, will continue to exert disproportionate influence over the U.S. political process for at least the next 25 years.

Baby Boomers Not Maximizing Their Strengths