WASHINGTON, D.C. -- Presiding over the darkest days the U.S. economy has experienced since the Great Depression, Federal Reserve Chairman Ben Bernanke leaves office this week as one of the most influential economic policymakers in the country's recent history. But the American public is divided on how Bernanke has handled his job, with 40% approving and 35% disapproving. One in four have no opinion. By contrast, Bernanke's predecessor, the better-known Alan Greenspan, left office with a strong majority approving of his performance.

These data come from a Jan. 25-26 Gallup poll, just ahead of Bernanke's final day on Friday. Bernanke has implemented a vast array of controversial and in some instances novel policy choices. These included acting as the "lender of last resort" to the beleaguered banking system, maintaining low interest rates for an extended period of time, and, most notably, engaging in the money-supply-expanding, bond-purchasing policy known as "quantitative easing" that has quadrupled the size of the Fed's balance sheet.

Republicans Most Likely to Disapprove of Bernanke

Appointed by a Republican president and then re-appointed by a Democratic one, Bernanke might seem like the rare public official with bipartisan appeal. However, Democrats are far more likely to say they approve of the outgoing Fed chairman (59%) than are Republicans (28%). Independents are divided, with 35% approving and 38% disapproving. 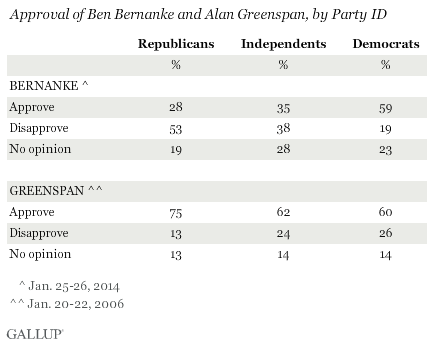 Greenspan, who also was initially appointed by a Republican president but served presidents of both parties, had a higher approval rating with Republicans (75%) than Democrats (60%) when he left office during Bush's presidency.

Higher-Income Americans Most Likely to Approve of Bernanke

A majority of Americans living in households with annual incomes of $90,000 or more, 54%, approve of Bernanke's performance as Fed chairman, while 35% disapprove. Lower- and middle-income Americans show a closer divide between approval and disapproval, with generally higher rates of no opinion.

Bernanke and other officials at the Federal Reserve have long insisted that the controversial quantitative easing program was designed to help the overall economy, but many critics charge that it has only benefited the wealthy by boosting the prices of assets disproportionately owned by upper-income Americans, such as equities. These data suggest that the wealthy were more aware and more appreciative of Bernanke's performance.

Bernanke's consequential legacy may take decades to fully assess, but he has already won many plaudits from an array of economists, policymakers, and financial analysts. Bloomberg Businessweek said of Bernanke's tenure that "the U.S. can consider itself fortunate he was there," while a columnist in U.S. News and World Report wrote, "the Fed chairman literally saved the country from another Great Depression." Former Obama economic adviser Austan Goolsbee recently praised Bernanke's performance, while even the more skeptical Wall Street Journal allowed that Bernanke's response to the financial crisis deserved "the benefit of the doubt."

The American public is divided on Bernanke's job performance. Many of the commentaries applauding Bernanke's actions focus on what might have happened had the Fed chairman not intervened, but most Americans are more likely to judge Bernanke, like other public officials, on the results of his policy decisions, rather than what might have been. While even a man as powerful as Bernanke cannot control all of the interrelated forces that drive the economy, Americans' views on his job as top central banker have been shaped by the speed and breadth of the recovery. And for many, the economic recovery remains underwhelming.

Results for this Gallup poll are based on telephone interviews conducted Jan. 25-26, 2014, on the Gallup Daily tracking survey, with a random sample of 1,020 adults, aged 18 and older, living in all 50 U.S. states and the District of Columbia.

U.S. Investors Not Sold on Stock Market as Wealth Creator

Even with the stock market soaring, U.S. investors are wary about stocks as a way to build wealth. The majority calls the market a fair or poor way for average Americans to grow their assets, while 37% calls it excellent or good.