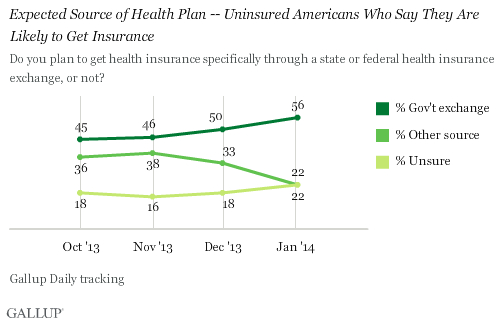 One possible factor in the growing popularity of exchange-based plans versus other sources is improvements made to the federal exchange website to correct a wide array of technical issues that plagued the site. Another factor may be that previously uninsured Americans who now have health insurance for 2014 had other options, such as insurance through an employer or signing up on a spouse's or parent's plan. Those options may not be as available to those who remain uninsured.

The latest results are based on Jan. 2-28 Gallup Daily tracking interviews with more than 1,500 Americans who currently do not have health insurance.

Currently, 53% of all uninsured Americans say they plan to get insurance, while 38% say they are more likely to pay the fine the government will assess most Americans who lack health insurance.

The percentage planning to get insurance is down from 60% of the then-uninsured pool in December. This decline may be attributable as much to the shrinking uninsured population as to changes in uninsured Americans' intentions for obtaining insurance. In other words, fewer Americans are now uninsured, and those who remain uninsured as time goes on are least motivated to get insurance.

A fairly small minority of the uninsured, 23%, say they have visited, or have attempted to visit, a federal or state health insurance exchange website. That number is little changed from 26% in December, and 20% in October and November, when many Americans had difficulty accessing the sites because of technical issues.

A small but notable drop in the percentage of Americans who are uninsured in January, the first month new health plans went into effect, is a positive sign the Affordable Care Act is making progress toward its goal of getting more Americans covered. Another positive sign may be the increasing percentage of the remaining pool of the uninsured who are planning to get insurance through the exchanges that were created by the law.

Still, both trends represent only modest improvements, and it may get harder to convince the remaining uninsured population to sign up for health insurance in the coming months. Gallup will continue to track the U.S. uninsured rate, and uninsured Americans' intentions for obtaining insurance, in the months ahead. Both measures will continue to gauge the early outcomes of one of the more significant recent pieces of domestic legislation.

Results for this Gallup poll are based on telephone interviews conducted Jan. 2-28, 2014, on the Gallup Daily tracking survey, with a random sample of 1,593 adults, aged 18 and older, living in all 50 U.S. states and the District of Columbia, who do not have health insurance.