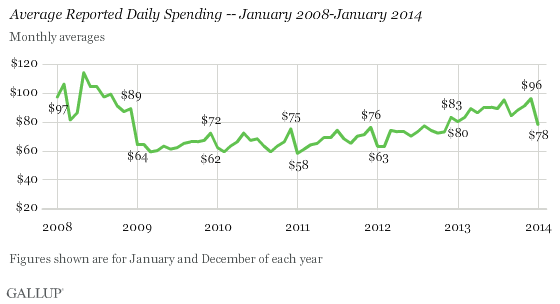 These figures are based on Americans' self-reports of the total amount they spent "yesterday" in stores, gas stations, restaurants, or online -- not counting home and vehicle purchases, or normal monthly bills. Each monthly average is based on approximately 15,000 interviews conducted as part of Gallup Daily tracking.

January's $78 in daily spending represents the first time spending has averaged less than $80 since November 2012. Still, it is higher than what Gallup saw from 2009 through November 2012, when the monthly figure ranged from $58 to $77, thus suggesting spending is still in a recovery mode.

Daily spending in December was particularly high among upper- and upper-middle-income households -- meaning those earning $90,000 or more, and $60,000 to $89,999, annually. Since then, average daily spending by this group has fallen from $174 in December to $137 in January, essentially matching the January 2013 level. However, spending among those earning $60,000 to $89,999 has fallen proportionately further, from $110 to $75, the lowest monthly average for this group in more than a year. That could be a one-month recoil after Christmas indulgences, but bears watching in February. 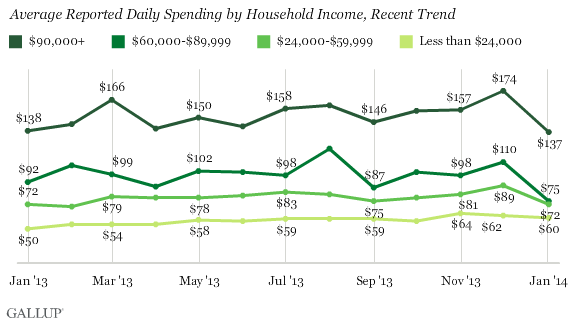 Consumers usually rein in their spending in January after burning through cash in December, and this January was no exception. The $18 drop is on the high end of the declines seen in previous Januarys, but falls within the $3 to $25 range Gallup has found since it began tracking spending. Importantly, even with this year's decline, spending continues to be high relative to the first four years after the 2008 financial collapse, and could be the precursor of accelerated economic improvement.

Results for this Gallup poll are based on telephone interviews conducted Jan. 2-31, 2014, on the Gallup Daily tracking survey, with a random sample of 15,253 adults, aged 18 and older, living in all 50 U.S. states and the District of Columbia.

For results based on the total sample of national adults, the margin of sampling error is ±1 percentage point at the 95% confidence level. The margin of error for the spending mean is ± $4.

Gallup's Economic Confidence Index showed little movement overall last week. Yet on a daily basis, confidence declined significantly at the end of the week, from -13 Monday through Wednesday to -23 Friday through Sunday.