WASHINGTON, D.C. -- Gallup's Economic Confidence Index improved slightly for the month of January, climbing to -16 from -19 in December. Although a disheartening jobs report and steep stock market losses negatively affected Americans' confidence in the short term, Americans' economic confidence improved for the third month in a row after dipping to -35 during the federal government shutdown in October. 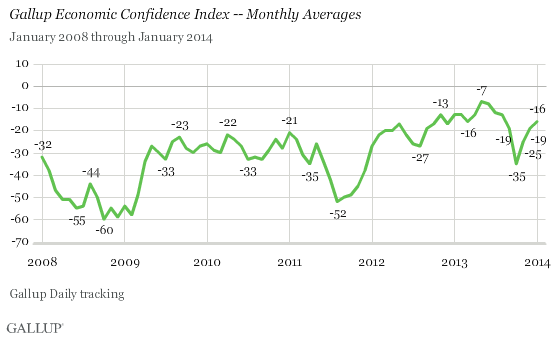 Last month's rise in confidence may surprise some, given the dismal December statistics from the Bureau of Labor Statistics and the worst January performance from the Dow in five years, but Americans have continued to become more confident in the nation's economic circumstances since October's federal government shutdown.

The January results are based on Gallup Daily tracking interviews conducted by landline and cellphone with more than 15,000 U.S. adults.

The Gallup Economic Confidence Index is the average of two components: Americans' views on the current economic situation and their economic outlook. The current economic conditions component of the index averaged -18 in January, based on 18% rating the economy as excellent or good versus 36% rating it poor. The economic outlook component was -13 in January, with 41% of Americans saying the economy is getting better and 54% saying it is getting worse.

Upper-Income Americans at Highest Level of Confidence Since July 2013

Confidence among Americans with an annual household income of at least $90,000 reached -1 for the month of January, a peak it hasn't seen since July of last year. Though still a negative figure, it reflects a six-point increase from December's -7 reading. Those living in lower- and middle-income households remain less confident in the economy, but also experienced an increase in economic confidence, to -18 from -22 in December. 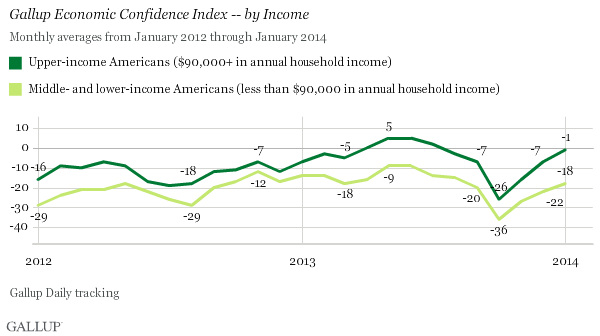 There was no shortage of bad economic news for the first month of 2014, and although Gallup did observe short-term movement in confidence in response to these events, the broader January readings might indicate that Americans' confidence in the economy is not strictly tied to jobs reports and the stock market. Those negative reports may have been counteracted to some degree by positive reports on consumer spending and GDP growth.

Still, economic confidence in February may be a bit fragile, with the stock market continuing to slide after steady gains throughout 2013, and uncertainty about whether this week's January jobs report will be more positive than December's was.

Results for this Gallup poll are based on telephone interviews conducted Jan. 1-31, 2014, on the Gallup Daily tracking survey, with a random sample of 15,240 adults, aged 18 and older, living in all 50 U.S. states and the District of Columbia.

Gallup's Economic Confidence Index showed little movement overall last week. Yet on a daily basis, confidence declined significantly at the end of the week, from -13 Monday through Wednesday to -23 Friday through Sunday.