WASHINGTON, D.C. -- President Barack Obama defended his signature legislative achievement, the Affordable Care Act, before Congress and the nation last week in his State of the Union address, but public opinion toward the law is little changed since November. Americans are still more likely to disapprove (51%) than approve (41%) of the law. 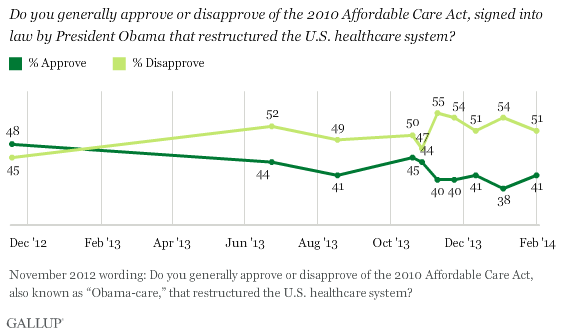 The latest results, from a Gallup poll conducted Jan. 31-Feb. 1, show that even though many provisions of the law are now in effect, Americans' views of the Affordable Care Act, commonly known as "Obamacare," still tilt negative.

Underpinning this lack of overall support is the fact that most Americans believe the law so far has had no effect (64%) or a harmful effect (19%) on their family. These opinions are broadly consistent with Gallup polling dating back to February 2012, when fewer provisions of the law were in place. 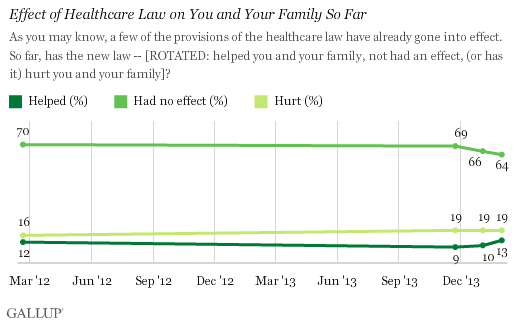 Notably, views that the law would make Americans' own healthcare situation worse had been declining through October, as the botched rollout of the healthcare website occurred, but ticked up in November. However, this percentage has now receded to levels observed before the troubled rollout of the website. 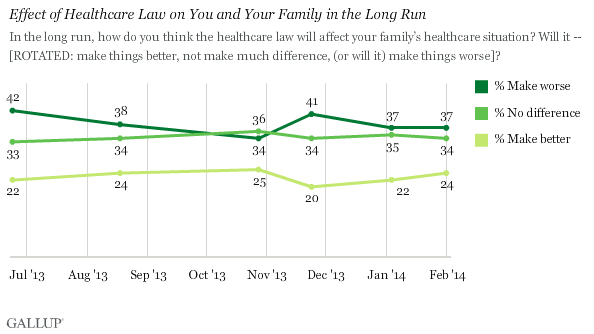 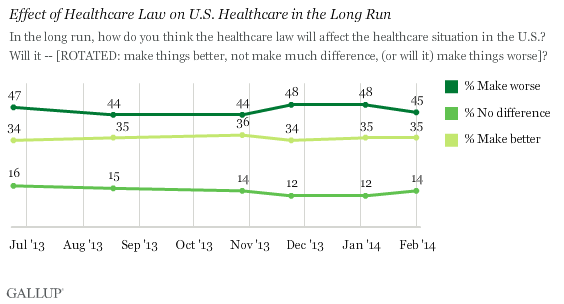 Even if the Affordable Care Act fulfills its purpose of improving the overall health of the nation by expanding individuals' access to insurance, public opinion of the law itself remains sickly. Americans' disapproval of the law has declined slightly since its peak late last year during the flawed rollout of the federal health exchange website, but a majority still disapprove of the law, and few believe it will make their current or future healthcare situation better.

Results for this Gallup poll are based on telephone interviews conducted Jan. 31-Feb. 1, 2014, on the Gallup Daily tracking survey, with a random sample of 1,017 adults, aged 18 and older, living in all 50 U.S. states and the District of Columbia.